MANCHESTER, England — The movement is so slick that it seems almost automatic, a machine whirring to life. In the best possible way, Manchester City’s players become thoughtless, operating on muscle memory. They do not need to pause, to think: They know.

Fernandinho has the ball, midway inside Arsenal’s half. To his left, Raheem Sterling makes a run, darting outside Stephan Lichtsteiner. Fernandinho does not need to look: He knows where Sterling is.

Now Sterling cushions the ball, perfectly, back to Ilkay Gundogan, a few yards behind him, but his work is not done. He dashes forward again, in expectation rather than hope.

Gundogan flicks the ball over Arsenal’s defensive line, disorientated, straight back to Sterling. It looks like creativity, like Gundogan is extemporizing, because that is what we want it to be, because that would make it somehow magical, but the chances are it is exactly the opposite: He will have played that ball, and Sterling will have made that run, a thousand times in training, until the timing is perfect and Pep Guardiola is satisfied.

Only a few seconds have elapsed, but the trap has been set. Sterling is in, down the left side of Arsenal’s penalty area, and Sergio Agüero knows where he has to go, where he is meant to be. By now it seems, from the crowd, to be effortless, almost telepathic, but it is mechanical, really. Agüero has materialized at the far post. The ball is at his foot. The goal is open.

That was the second of the three goals that Agüero, and Manchester City, scored in a 3-1 victory against Arsenal on Sunday, though it was not especially different in style from the first or the third: The only real variation, the only distinguishing mark, was how he chose to convert. He put the first past Bernd Leno with his head, the second with his foot, and the third, though the referee Martin Atkinson did not spot it, with the help of his arm.

There was a sense of inevitability about all three of them, a dread predictability. Not because Arsenal — with its new manager and its handful of new players and its new dawn after years of elegant decline under Arsène Wenger — is still, at heart, the most generous and most accommodating of opponents, but because that goal is now City’s hallmark, its calling card.

This has been a challenging week for Manchester City. Guardiola kept his players in their changing room for some time after a defeat at Newcastle United on Wednesday, picking over the flaws that had led to their downfall. It had been a fourth defeat in nine league games; something was amiss.

Even first-place Liverpool’s failure to take advantage of the slip-up 24 hours later, Jürgen Klopp’s team drawing at home against Leicester City, brought little solace. “We said that we did not recognize our team,” Guardiola said. “The players felt it, too. We did not recognize what we were.”

What they needed, then, was a reassertion of identity, and there is no better expression of that identity — of what this City team is, or of what its manager would like it to be — than that second goal. “We have scored a lot like that,” Guardiola said after the game. 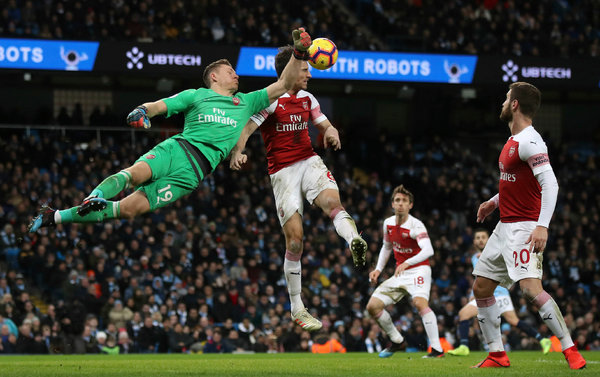 That is something of an understatement. N o team in the Premier League has scored more goals from cutbacks this season, according to the analytics company Opta; 19 of City’s 66 goals this year have been scored from inside the 6-yard box. City scores that goal so often that it has become its default setting. Here, it felt almost like it was a comfort blanket, this City team’s artful, devastating version of going back to basics. Guardiola’s players do not have to think to score that goal. They can do it on autopilot.

That was true during the manager’s time at Barcelona and at Bayern Munich, too, of course: More than City’s goal, it is Guardiola’s. Perhaps, in time, just as a chipped penalty has become known as a Panenka for the man who made it famous, a far-post tap-in from a low cross will take his name.

He has done more than anyone else, after all, to evangelize its effectiveness: According to his journalistic confidante, Martí Perarnau, Guardiola has always agreed with his erstwhile Barcelona teammate Miquel Soler that a “hard, low cross across the 6-yard box is a goal half-scored.”

It is the goal he encouraged Jordi Alba and Dani Alves to help create at Barcelona, though neither needed much encouragement. It is the goal he schooled Arjen Robben and Franck Ribéry in assisting in Germany, his only acquiescence to the differing quality of the two squads being that he allowed the latter pair to cross the ball in the air, rather than along the ground — sometimes.

It is the goal that has characterized City’s success, too, since he arrived here: 57 times, one of his players has scored from inside the 6-yard box in his time in England. It is as if Guardiola has discovered a glitch in soccer’s software, a gamer who has found a cheat that works every time.

Unai Emery, the Arsenal manager, would have known that is what Guardiola would try to do, what City would try to do. He is, after all, a compulsive viewer of forthcoming opponents, a dogged analyst, given to spending hours poring over video.

In the last few days, Emery would have seen that goal countless times, the footage taking on a metronomic, hypnotic quality as City worked the ball out wide, fired in a low cross, over and over, again and again. He would have drilled his defenders in how to cope with it, in what to look for, in anything and everything that might work.

But that is the thing: Once the machine is working, there is little that can stand in its way. It is the most predictable goal in English soccer, but that does not seem to diminish its effectiveness.

“They have the quality, the capacity,” Emery said, when asked if there is anything that can be done to stop Guardiola’s teams performing their signature piece, casually idling through their greatest hit, whether knowledge can be power. “It can be hard to stop that.”