Young Sydney Thunder spinner Arjun Nair is confident he'll be back bowling in time for this summer's Big Bash after injury setbacks and question marks over his action cruelled his 2018.

Nair has inked a new two-year deal with the Thunder, with the 20-year-old still considered one of the game's rising talents after making his Sheffield Shield debut for NSW at age 17 in 2016. 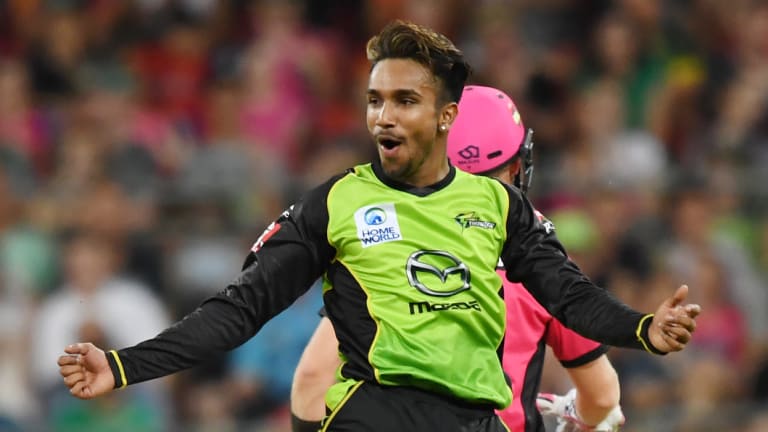 Comeback: Arjun Nair is looking forward to the upcoming Big Bash after a difficult past 12 months.Credit:AAP

However, he's endured a difficult 12 months, suspended from bowling for three months during last summer's BBL when he was ruled to have put forward a "markedly different" action in testing after being reported for a suspect action in a match.

The off-spinner was cleared to return to bowling in May, but hasn't been able to do so in the opening month's of the season after suffering a back injury in August.

After taking nine wickets in last year's BBL with an economy rate of just 7.06, Nair said he would be ready to return to the crease for the Thunder's first match against the Melbourne Renegades on December 21.

"Having started last season pretty strongly it was a big blow to be suspended from bowling, not just for me but my family as well," Nair said.

"Initially I was devastated but I was confident that I could come back and having the support of the coaching staff made it a lot easier.

"Watto (Shane Watson) also came out publicly and gave me his support. Knowing the team supported me was a good feeling. Sydney Thunder is like a second family to me.

"I want to enjoy every game with the big goal to win the Big Bash."

Nair is one of three spinners in the Thunder's squad alongside Chris Green and Fawad Ahmed, with English stars Joe Root and Jos Buttler their big-name internationals.