Tiger Woods hadn’t won a major in 11 years. He had struggled through injury and personal crises. He was dismissed as finished, his years of dominance fading into memory.

Then on Sunday he won the Masters again, at age 43.

When athletes begin to fade, it’s usually all over. But a select few have returned in triumph, defying setbacks or Father Time.

The comeback most people thought of when Woods won Sunday was the Masters victory by Jack Nicklaus at age 46 in 1986. Nicklaus had not won a major in six years and with the win became the oldest player ever to win one.

Even more incredible was the return of Ben Hogan at the 1950 U.S. Open. His car had collided head-on with a Greyhound bus in Texas in 1949, and Hogan was nearly killed. After two months in the hospital, and a year recovering, he returned to golf and won the Open. He added five more major championships over the next three years. 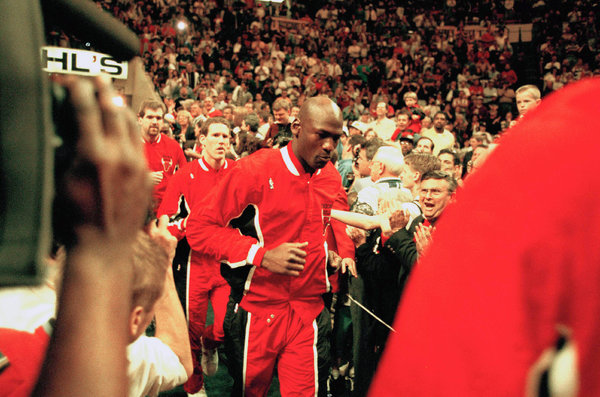 After three straight championships with the Chicago Bulls from 1991 to ’93, Michael Jordan decided to give baseball a try. A .200 batting average in the minor leagues made him a figure of ridicule for many fans and commentators, and the N.B.A. moved on.

Then as abruptly as he retired, Jordan came back in 1995. In his first three full seasons, the Bulls won three more titles. Jordan retired again in 1999, generally considered the best player in basketball history. (A second comeback, with the Washington Wizards, was less successful.)

After Muhammad Ali declined to serve in the military during the Vietnam War, he was stripped of his heavyweight title and was unable to box for three years.

When he was able to get relicensed in 1970, he resumed a career that is regularly cited as the greatest. He regained his title in 1974 and battled through three immortal fights against Joe Frazier.

George Foreman, from whom Ali recaptured the heavyweight title in 1974, hung up the gloves in 1977. But 10 years later, at 38, he decided to return to the ring. After a series of wins, he got a shot at the title at age 42, but lost to Evander Holyfield. He kept boxing, though, and got another improbable title shot in 1994 at 45 years old. Incredibly, he beat the champion, Michael Moorer, and won three more fights before losing in his final bout in 1997 at age 48.

Roger Federer’s win at the Australian Open in 2017, at age 35, was his first major title in five years and capped a comeback from back injuries and knee surgery. Beating Rafael Nadal in that final showed Federer could defeat the younger rivals who had flummoxed him during his drought. In 2018, he won the Australian Open again, for his 20th major title, and returned to No. 1.

Jennifer Capriati was written off after her career as a teen star was derailed by personal problems. She quit the tour for two years and dropped out of the rankings. But she returned in 1996 a more mature player and won the Australian Open in 2001 at 24. She became world No. 1 and added two more Grand Slam titles.

But the most inspiring tennis comeback undoubtedly belonged to Monica Seles, who was stabbed by a deranged fan on the court in 1993. She was 19, No. 1 and an eight-time major singles champion at the time. Seles struggled with her injuries and with understandable anxiety after the attack. Still, she returned to win the 1996 Australian Open and make three other Grand Slam finals.

Quarterback Doug Williams helped lead the Tampa Bay Buccaneers to the 1979 N.F.C. championship game. But after a salary dispute in 1982, he left to join the fledgling U.S.F.L.

When that league folded, Williams caught on as a backup to Jay Schroeder for the Washington Redskins in 1987. But Williams earned the starting job just before the playoffs and led the team to a Super Bowl title, the first black quarterback ever to do so.

Aldiniti was a solid steeplechaser in Britain in the late 1970s before sustaining a bad leg injury. At about the same time, the jockey Bob Champion learned he had testicular cancer. Once both had recovered, they were paired for the 1981 Grand National and won it. Their triumph was turned into a 1984 movie, “Champions,” starring John Hurt.

Honorable mention goes to Da Hoss. He won the 1996 Breeders’ Cup Mile, then raced only once in two years. Yet in his return to the Mile in 1998, he won it again, causing the race announcer Tom Durkin to proclaim it “the greatest comeback since Lazarus.”

Greg LeMond became the first American to win the Tour de France in 1986 and seemed poised to reel off several more. But the next year he was accidentally shot while turkey hunting, hit by several dozen pellets, including some in his heart lining.

He returned to the Tour in 1989 in poor form and was considering retirement. But he strengthened as the race went along and won it in one of the most famous finishes ever, beating his rival Laurent Fignon in a time trial on the Champs-Élysées. The final margin was the closest in history: eight seconds. LeMond went on to win another Tour the next year.

Tommy John had a strong 12-year career as a pitcher for the Indians, White Sox and Dodgers. But in 1974 he sustained an injury to the ulnar collateral ligament of the elbow, which usually meant the end of pitchers’ careers.

John decided to try an untested, speculative surgery, now known as Tommy John surgery. In the procedure, now routine, a tendon from elsewhere in the patient is removed and replaces the damaged one in the elbow.

John missed the 1975 season, but returned the next season at 33. He had three more All-Star appearances and three 20-game win seasons before finally retiring in 1989 at 46.