Wests Tigers' five captains all endorsed the tough decision to dump cult hero Mahe Fonua to reserve grade after he was late to training on Sunday morning.

Fonua ran for more than 200m in a man-of-the-match performance against the North Queensland Cowboys last Thursday, but the Tigers were not prepared to overlook his weekend slip-up. 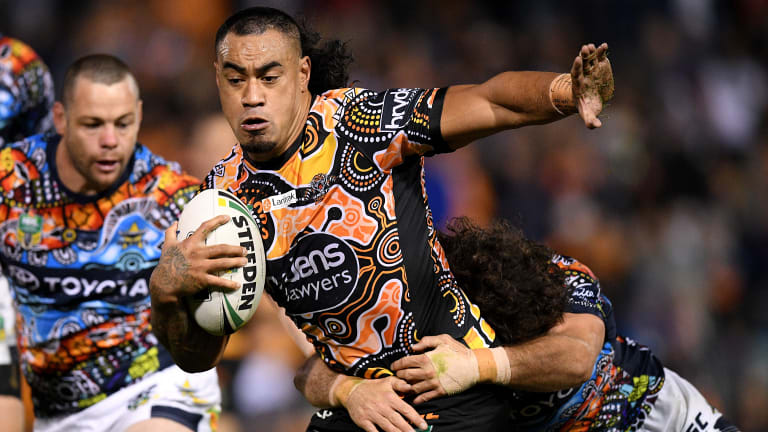 Mahe word: Fonua was impressive against the Cowboys but was a late arrival at training on Sunday.

The Melbourne-raised Tongan with the famous mullet could have easily been given a warning and taken his place at left centre against Penrith on Thursday night.

But the Tigers have worked hard under coach Ivan Cleary to build a culture that places the team before any individual.

Cleary and the five co-skippers Benji Marshall, Chris Lawrence, Russell Packer, Josh Reynolds and Elijah Taylor all agreed with the punishment. It's understood there were no integrity issues, but Fonua stayed out late Saturday.

Kevin Naiqama returns to the centres in Fonua's place. While Fonua will have to wait at least a week before he is unleashed in the NRL again, the Cleary family showdown will go a long way to packing Panthers Stadium.

Gun halfback Nathan, 20, was named in the Penrith No. 7 jersey for the first time since round three when he broke down with a knee injury.

He will have the Tigers clash and next weekend's game against St George Illawarra to prove to NSW Origin coach Brad Fittler he is worth a gamble against Queensland.

The Cleary household has featured plenty of banter this week, just as it did in the lead-up to the first father-son battle last season.

"We've only got the one game from last year to draw on for experience about this type of thing, but it has a similar feel,'' Cleary told Fairfax Media.

"I've known he would play in this game for a couple of weeks now. It's a strange situation, but I'm really glad he's back, it would have been nice if it was a week later, but in all honesty the quicker he gets back the better.

"They [Penrith] are well and truly in the window for honours later in the season. They have some key guys missing, particularly in the back, but they're very difficult to beat in Penrith.

"They have a very strong squad and been playing with plenty of energy all season. But we've managed to get a couple of big scalps so far, it's looking like that situation for us again where we're outsiders, so we'll go there, put our best foot forward, get ourselves into the contest and see if we can grab one.''

As for who Ivan's wife and Nathan's mother, Rebecca, was cheering for?

"It's a difficult night for her. She knows where her bread is buttered, but she also wants the best for her son,'' Ivan said, with a giggle. "Nathan and I had breakfast together last year, and her comment was, 'that's a winning breakfast'. She was right.''