Time is right for Roo Hartung

Billy Hartung's four years at Hawthorn will go down as part of the football journey.

Drafted at pick 24 at the end of 2013 and making his debut in 2014 in the midst of a famous Hawthorn era, he gathered just 63 games in those four years but missed out on the premierships. Each time he made ground, such as 2015 when he was a fixture in the team, a fall followed – even a brutal reality check. 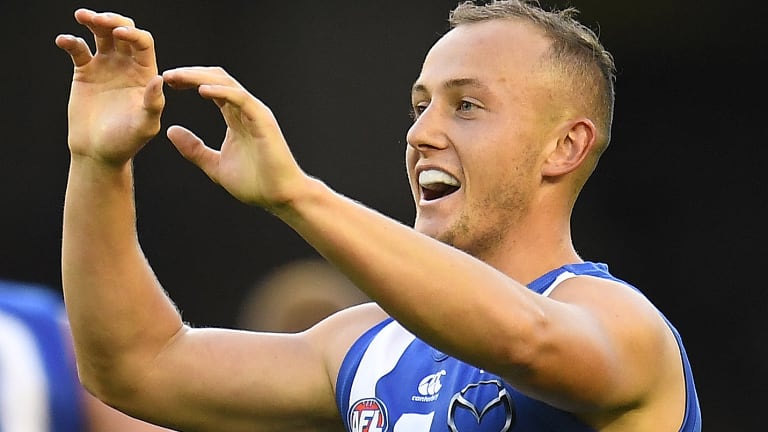 In that season, he played 20 games including the preliminary final win over  Fremantle, largely coming off the bench and often as the substitute player. But when the Hawks prepared for a grand final against West Coast, he was called into coach Alistair Clarkson's office during the week and told he would be dropped for Jack Gunston, who was returning from an ankle injury.

Clarkson gave Hartung a hug, and he was allowed to participate in the parade through the city streets on the Friday, but it was scarcely the same.

"Devastated,'' was the word he used when the media found him in the cavalcade that day, but nevertheless he did what good team men do: he sucked it up and made sure he did not drag the rest of the group down as he watched them complete a rare hat-trick of flags.

Of course, his 2015 story is familiar even if it is sad. In fact, most years there is at least one angry-hurt-bewildered player who misses out, or another who is suspended or injured.

Richmond coach Damien Hardwick said last year he believed that due recognition should be given to more than the playing 22, as occurs in some other codes, with the presentation of medals. Hardwick cited the example of an injured Dean Rioli missing Essendon's 2000 premiership and Bulldogs captain Bob Murphy in 2016. Bulldogs coach Luke Beveridge offered his own medal but, while it was a remarkable gesture, it was actually a coach's medal, and Murphy – who plainly appreciated the thought – returned it later. 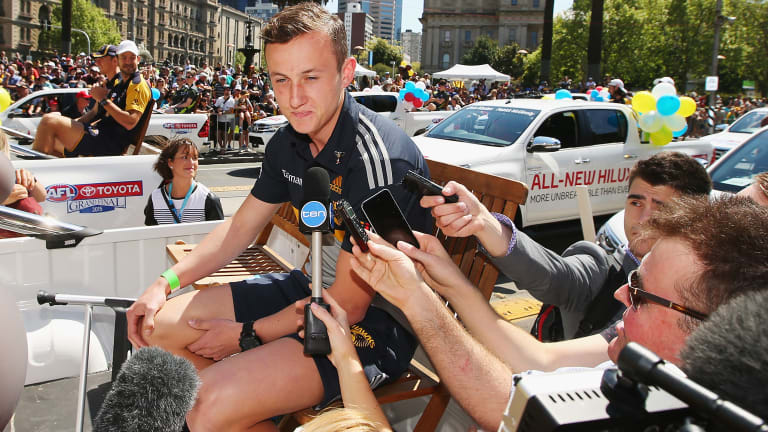 Former Hawk Billy Hartung speaks during the 2015 grand final parade, having been dropped from Hawthorn’s team.

Derek Kickett's dumping for the 1993 grand final led to him leaving Essendon with wounds that never recovered, while Mark Blake's dumping for Geelong's 2007 flag resonated for a while, too. Mark "Bomber" Thompson will never forget the frosty reception he received at Blake's family home in Geelong when he drove there in grand final week to break the news. Kevin Sheedy never got to Kickett in 1993.

By consensus, it was dodgy kicking (and less-than-elite decision-making with the ball) that caused the doubts in Hawthorn's mind. Clarkson's teams have been famous for their precision delivery all over the field by foot since his arrival at Hawthorn in 2005. So at the end of 2017, despite a season in which the man from the Mornington Peninsula played 18 senior games and averaged more than 20 disposals, Hartung was cut adrift by the Hawks.

Luke Hodge said in 2015 "another opportunity" would come for Hartung, but it did not – at least not at his first club. The Hawks missed the finals last year and, while Hartung was in the team for the pointy end of 2016, the season ended with a semi-final defeat by the Bulldogs.

In fact, the big opportunity might come at North Melbourne, where the emphasis on kicking skills and short passing in particular is slightly less strident. The Kangaroos, with big-marking forwards in Ben Brown and Jarrad Waite, are happy to launch the ball forward to contests much of the time, which means Hartung, who loves to run and carry in the old-fashioned way, might have found the right home at last.

Drafted with the second-last selection last year by North, Hartung is putting his considerable talents and athleticism on show with the Kangaroos, playing four consecutive senior games and averaging 22 disposals as the Roos show up early in 2018.

Hartung the roadrunner, who once kicked 20 goals in a game for Red Hill as a junior, and who was an All-Australian under-18 player at Dandenong Stingrays, was the top player in North's 'Yo Yo' endurance testing at the start of this year and he is still turning over those little legs. "They've got the grunt inside with [Jack] Ziebell and [Ben] Cunnington,'' former North coach Denis Pagan said this week. "So they don't really need that so much. I reckon he'll continue to play wide, and I'll tell you what, if he gets space, he can really run!''

Pagan said the test would come down the track for Hartung as an outside player. "I don't mean to be critical, but in the games when he's gone well … Carlton were pitiful and St Kilda not much better. So it's only going to get harder now.''

On Sunday, Hartung plays against the Hawks for the first time. North have protected him a little, shielding him from media this week despite some requests. Quite often, players who step out for the first time against a club that has rejected them go over the top with emotion.  North also have another former Hawk, Jed Anderson, in their team although Anderson has been through the experience before.

For Hartung, it should be another step along the way. No more or less.