Samara: Could this be the moment Tim Cahill has been waiting for? Will this be the game in which Bert Van Marwijk turns to the Socceroos talisman to deliver the goalscoring miracle he has so often in the past?

Australia has suffered a setback in their quest to escape their group and progress to the second round of the World Cup with striker Andrew Nabbout set to miss the remainder of the tournament after sustaining a serious injury in the 1-1 draw with Denmark. 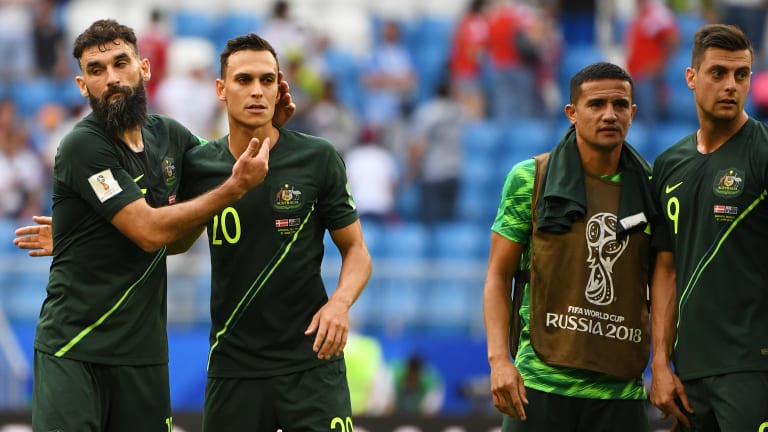 Benched: Tim Cahill (second from right) with teammates after the 1-1 draw with Denmark.

But could that open the door for Cahill to either start, or at least get the chance to make a significant contribution off the bench in the Socceroos must-win game against Peru in Sochi next week?

Australia's starting centre-forward Nabbout suffered a dislocated shoulder against Denmark on Thursday night, requiring a lengthy stint on the sideline. 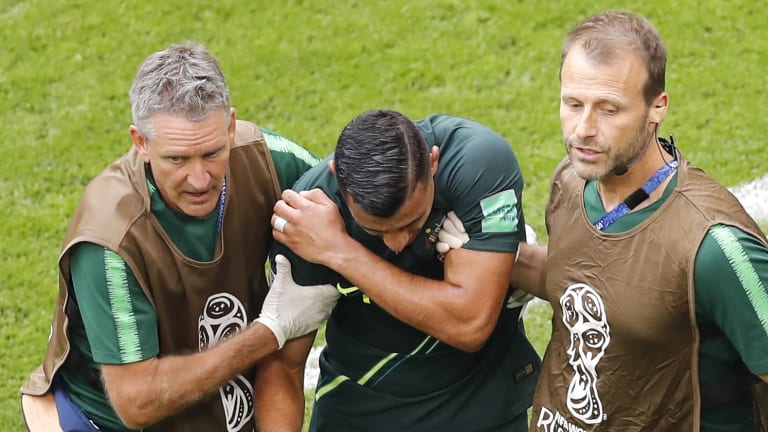 Sidelined: Andrew Nabbout leaves the field with a shoulder injury.

It means Nabbout will not feature for the Socceroos again unless they do the unthinkable and reach the late stages of the tournament, with the injury set to sideline him for about two weeks.

Van Marwijk has preferred the hard running, muscular Nabbout to all other options in the Socceroos first two games because his high energy levels mean he can work, chase, harrass and press from the front.

But with him no longer an option the Dutchman has to make a major decision for a game the Socceroos simply have to win if they are to harbour any hopes of making the round of 16.

Van Marwijk's preference in the two games so far has been to use Nabbout as a sacrificial workhorse for an hour or so and then replace him with Tomi Juric.

But Juric has himself been nursing a knee injury during the lead up to this competition and that has restricted his mobility. The Swiss-based frontman is a big physical prescence, but he is not a noted goalscorer – and this is one match where goals are a necessity and containment will not be an option.

Jamie Maclaren, drafted into the final squad at late notice, has cooled his heels on the bench for both games and not seen a minute.

He is a very different type of player to Nabbout and Juric. Smaller slighter and quick, he is a penalty box predator. He was in fine form for his Scottish club Hibernian in the latter stages of the Scottish Premier League and is the most likely in the squad to pounce on a half chance in the penalty area.

Which then brings the crucial question: Whither Cahill?

The  veteran has, like Maclaren, been an unused substitute during this tournament so far.

His lack of game time this year – 70 minutes only with Millwall – mean he is ill equipped for the role Van Marwijk requires from his starting centre forward. Cahill simply does not have the miles in his legs to do the endless chasing and thankless pressing that Nabbout has done in the opening two matches.

But he is a goalscorer, the man who pops up at the most improbable of times to dig his country out of desperate situations. Yes, that used to happen more in the past than the present, and his recent goalscoring record for Australia – bar that immense brace against Syria – has not been impressive.

But in desperate circumstances will Van Marwijk, a stubborn man who does not like to be told what to do, roll the dice?

Cahill has the experience, the track record and enormous self belief. He is also brilliant in the air, which might well be the best route to goal for Australia against a Peruvian defence not noted for its aerial ability at set pieces.

Certainly there was some surprise that he wasn't used, at least in the dying minutes, against Denmark as Australia sought a way through the giant Danish rearguard.

Opinion on the ground is generally in favour of breaking the emergency glass at some stage and throwing him into the action.

It is likely that Juric or Maclaren will get the nod against Peru. But if ever this was an occasion for even a truncated bout of Timmy Time, this is it.

For Nabbout the injury is devastating. The 25-year-old landed awkwardly following an aerial challenge midway through the second half of the Socceroos' draw against Denmark, extending his arm as he landed and subsequently dislocating his shoulder upon impact.

The former Newcastle Jets man was writhing in pain as he crashed into ground and had to be substituted immediately, replaced by Juric.

Despite the bitter blow that will surely end his World Cup campaign prematurely, Nabbout was hopeful that a quick recovery coupled with progression to the second round will provide him with a slim hope of returning to the field in Russia.

"It’s disappointing. Obviously it there was a lot of emotion running through me after the game. We’ll see how it settles down in the next few days and we’ll go from there. I can’t really say much now because the doc hasn’t had a chance to look at it," Nabbout said.

It's the second time Nabbout has suffered such an injury, dislocating his shoulder while playing in Japan. He was told a recurrence of the first injury will include a shorter recovery period, giving him some hope of playing again at the World Cup.

"I’ve always got positive thoughts on my mind so hopefully if I rehab it quick enough then anything can happen. I recovered pretty quick from the last one," he said."I was back running within a week and a half, two weeks. Hopefully this time – being the second time – it recovers a little bit quicker and we’ll go from there."

It will means Bert van Marwijk will have to change his attacking line-up for the first time since forming camp back on May 20 in Turkey, having kept with the same attacking quarter of Nabbout, Robbie Kruse, Mat Leckie and Tom Rogic for all games, including friendlies.

During the week, van Marwijk suggested Cahill is not considered as a starting option, meaning Australia's all-time leading goal scorer will come off the bench if he's to play in a fourth World Cup.