There is no literal translation for the Japanese word natsukashii. It means longing for something that never was, nostalgia for a moment you know has passed and will never come again.

It’s a beautiful word in a beautiful language and describes beautifully Tokyo’s opening Olympic act, not a celebration but a deft nod to the times in which we find ourselves.

You felt it as the Japanese team entered the stadium, denied that once-in-a-lifetime moment of being greeted by 60,000 proud and partisan voices. Cheering, by the way was not allowed, athletes instead arrived to a smattering of polite applause.

You felt it as you walked around the stadium, before taking your seat as one of the few thousand inside, while millions and millions watched at home.

The locals, those who have paid billions for the privilege of staging this party, gathered on nearby streets just to say they were there, sort of. How you felt for them as they bowed, waved and smiled, the ever-perfect hosts, denied the chance to see a return on their significant investment of time and money.

A small but determined knot of protesters was there too, but that shouldn’t be the story of this night. There is always a disciplined chorus of critics for every Games, though you must understand their point too.

This was not a lavish ceremony like Beijing, it didn’t have the humour, history, swagger and scale of Danny Boyle’s 2012 showpiece. There was no stand-out moment to remember it by, like Antonio Rebollo’s flaming arrow from Barcelona or Cathy Freeman’s cascading waterfall from Sydney, no gaffe either, like Vancouver’s malfunctioning cauldron or Sochi’s four Olympic Rings.

In a country divided by whether to stage these Games or not, organisers sought a modest, reflective and intimate tone, a tightrope they’ll dance in the weeks ahead in what history will judge as either the boldest or stupidest sporting experiment yet. Even the fireworks – an obligatory part of these proceedings – seemed to lack their fizz in deference to a more sombre occasion.

When they write the book on these Games, then, the pandemic will be front of centre of the script—but the Olympics is really about the tales of athletes and the stories behind their stories.

Syria’s civil war has killed around 500,000 people and displaced millions for the last decade. All 12-year old table tennis player Hend Zaza – the youngest athlete here in Tokyo – has known is conflict, but she wore a smile as wide as the Rainbow Bridge as she led her tiny nation into the stadium.

“This is my happiest moment, my greatest ever day,” she said.

So, when you question whether these Games should have gone ahead, think of Hend, whose only ‘normal’ is a world removed from those Olympic platitudes about peace and harmony.

Hend’s compatriot Yusra Mardini fled Syria five years ago, the then-17-year-old treading water for three hours as the cramped boat she escaped in started to sink into the Aegean Sea. She carried in the flag of Olympic Refugee team, 24 hours before her appearance in the 200m butterfly.

“Swimming saved my life and then helped me rebuild my life from absolutely zero,” she said. “Moments like this, they aren’t meant to happen to people like me.”

Hend and Yusra’s stories are a world removed from performance funding, preparation camps and medal targets – and perhaps that’s why these Games really are more important than ever. And why we perhaps shouldn’t judge them in the cold, hard metric of gold, silver and bronze. 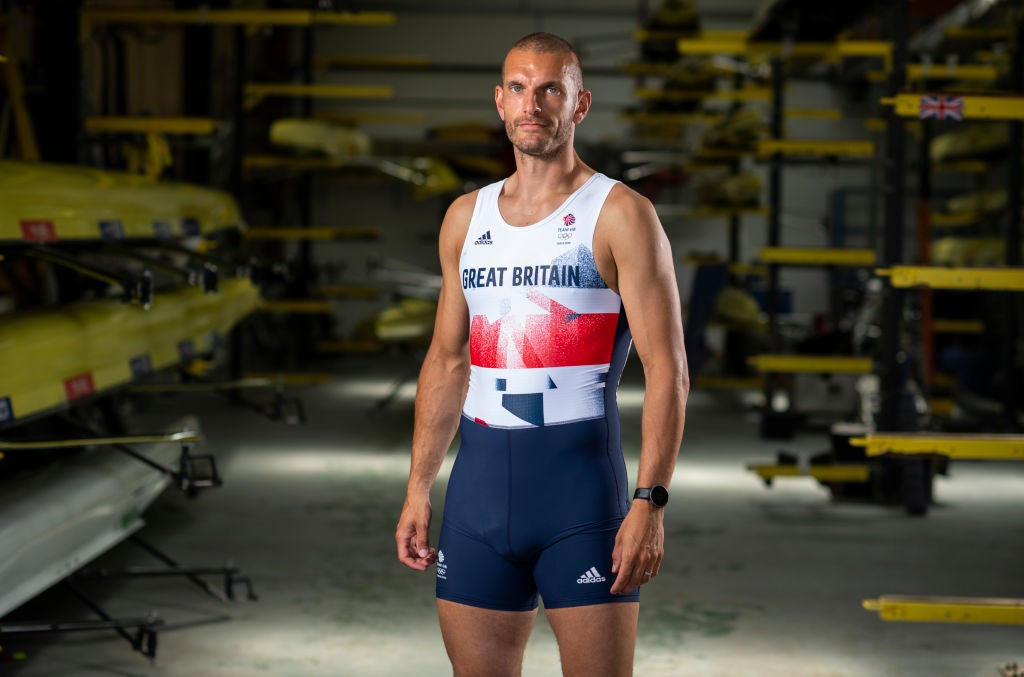 Only 22 members of the 375-strong British team took part, doing their best to play to the tough crowd behind Moe Sbihi, the first British Muslim to carry the flag, and his co-bearer Hannah Mills. Sbihi, a comprehensive-educated kid from Surbiton, didn’t think rowing was for people like him and yet here is, a gold and bronze medallist and standard bearer, whose opening race is tomorrow, live on Eurosport and Discovery+.

The excited buzz that precedes the most iconic moment of the ceremony, the lighting of the flame, was absent.

Perhaps it was no surprise when Naomi Osaka took the role, her opening match with Saisai Zheng, scheduled for Saturday, had been strangely delayed 24 hours without explanation.

Osaka has a complex love-hate relationship with the sport that has made her a millionaire many times over. She often talks of the burden placed on her, the obligations she must fulfil and a never-ending debt she feels obliged to continually repay.

And that’s not unlike Tokyo’s contract with the International Olympic Committee—because these Games are perhaps more about duty and honour than any than have gone before them.

Stream every unmissable moment of Olympic Games Tokyo 2020 live on discovery+, The Streaming Home of the Olympics.