Sally Pearson always figured the Tokyo Olympics would be her swansong, but now that the 2020 Games are closing in, the idea of retirement is confronting for her and raises the thought of whether Tokyo will be her sayonara to competition.

“Definitely I have got my eyes on Tokyo. I want to defend my world title in Doha and go onto the Olympics and then say Tokyo is it,” Pearson said. 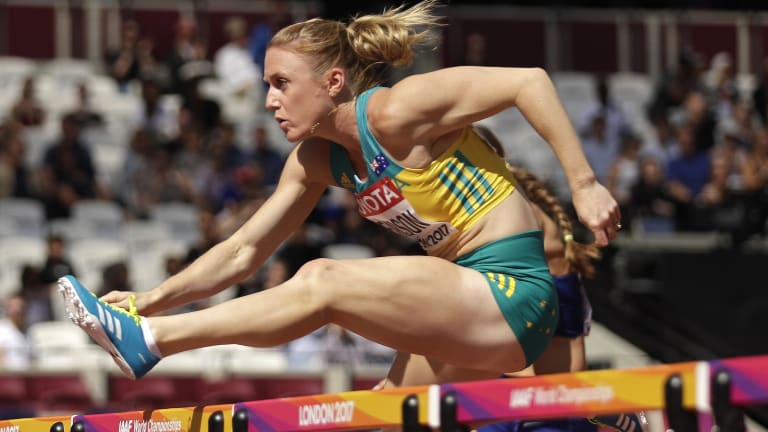 Saying goodbye is hard to do: Sally Pearson will wait to the ‘last minute’.

“But it’s a hard to make that decision because I love it so much, I just love the sport, I love racing.

“For me to pull away after Tokyo, if I do you look ahead at the years after that and and there is LA or Paris [for the next Olympics in 2024] and I am like ‘oh, it would be so good’.

“I missed three years of major competitions [through injury] and I want them back.

“I’ll go to Tokyo and then it will be ‘We have to have a serious talk, Sally'. It will be difficult but it will be a decision we make down the track with all the information.”

The 31-year-old, who coaches herself, said her body now didn’t hold up to the demands of a 20-year-old but she understood better how to manage herself and her training. Pearson would be 37 by the time of the Olympics in 2024.

Jamaican sprinter Merlene Ottey was 40 when she won bronze in the 100m at the Sydney Olympics. She had the longest career as an international sprinter, and anchored the Slovene 4×100m relay team at the 2012 European Championships at the age of 52.

Pearson has joined the board of Athletics Australia in an unusual move in sport for an athlete to be on the governing board while still competing.

That board position is a first foray into management and an eye to what happens when she stops competing.

“I feel like I know it's going to be a challenge and I like that but I have had a huge profile for a long time and I have always wanted to give back to my sport but it's never been the right time to do something like this," she said.

“I think it is time to start implementing these ideas I have [for the sport] and to listen to people who are there and understand the background and what the reasons are we do some things and what the financial situation is.”

Pearson was the athlete who pushed for the formation of the Athlete Advisory Committee which was formed to be a direct liaison with the chief executive of Athletic Australia. Pearson was elected chair of that committee.

When former athlete John Steffensen left the AA board in April, the board applied a provision of the rules which had not been activated for some time but which allowed for an athlete representative on the board. As chair of the advisory committee, Australia’s world and Olympic champion was a logical choice.