We may have seen the upset of the Games on Sunday night.

France beat the United States 83-76 in the men’s basketball, ending the proud basketball nation’s 25-game winning streak at the Olympics. 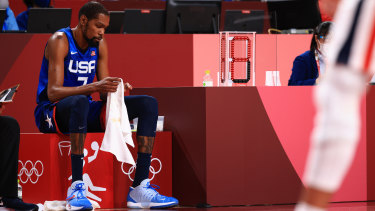 The current Team USA side is hardly the 1992 Dream Team as several superstars decided to skip the Games but they still started the tournament as strong favourites.

The writing may have been on the wall when they lost to Australia and Nigeria in warm up matches.

Those two nations faced one another last night and while the match was scrappy, the Boomers nabbed the result they were after.

The headlines were all for Australia’s victorious women’s 4x100m freestyle relay gold but Brendon Smith was the first Australian to step on the podium in Tokyo.

He claimed bronze in the men’s 400m individual medley. 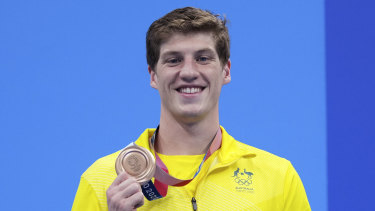 It’s been quite the journey for Smith, who was a surprise medallist.

Chip Le Grand is in Tokyo and he filed this piece on Smith’s lonely journey to Olympic glory.

Recapping a big day in the pool

It was a solid haul for Australia. The star women’s 4x100m freestyle quartet delivered on the only race a gold was truly expected in. 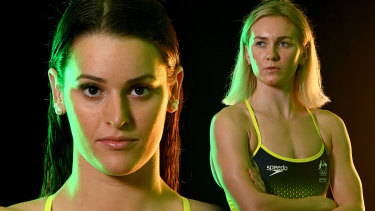 In last night’s heats, Kaylee McKeown put the world on notice as she recorded an Olympic record in her 100m backstroke heat.

Phil Lutton was poolside and filed this report, previewing both McKeon and McKeown’s pursuit of gold on Monday.

Whatever you do today, make sure you are free at 12.20pm.

That’s when Ariarne Titmus and Katie Ledecky will square off in the women’s 400m freestyle final. 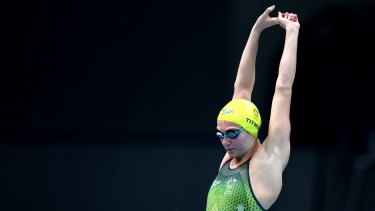 Better swimming judges than myself have been talking about this race as the best of the Games for years now.

One of those judges – Phil Lutton – has been poolside for Titmus’ rise to stardom.

He previewed the clash here.

The highlights to keep an eye on today

Swimming: Emma McKeon, a gold medallist yesterday in the 4x100m freestyle relay, will race first in the 100m butterfly final (11.30am AEST).

Ariarne Titmus, the Australian and world champion, takes on the American Katie Ledecky, a five-time Olympic champion, in the 400m freestyle final (12.20pm). 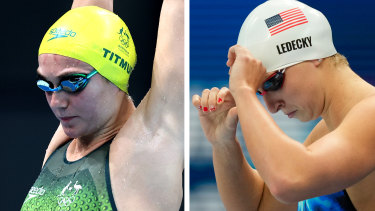 Ariarne Titmus and Katie Ledecky square off in arguably the match race of the Games on Monday.Credit:Getty

And the men will try to emulate the women when they race in the 4x100m freestyle relay, though may find the competition much tougher (1.05pm).

Triathlon: The men’s event is due to begin at 7.30am. Aaron Royle, Jake Birtwhistle and Matt Hauser are the Aussies to watch.

Surfing: Stephanie Gilmore hits the waves again from 8am and Sally Fitzgibbons at 12.12pm. The men compete in the afternoon. 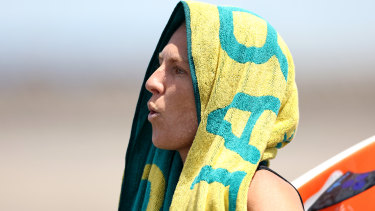 Steph Gilmore is back in action today.Credit:Getty

Skateboarding: It’s the women’s turn today, with Hayley Wilson contesting the street skating from 9.30am.

Table tennis: Jian Fang Lay is up in the second round at 11am.

Rugby Sevens: Australia play Argentina at 11.30am and Korea at 7pm.

Taekwondo: Australian Jack Marton takes on Egypt’s Seif Eissa at 11.45am in the 80kg round of 16.

Hockey: The Hockeyroos will look to capitalise on yesterday’s success when they take on China at 1.15pm.

Water polo: Australia take on the Netherlands in the women’s tournament at 7.20pm.

Hello and welcome to live coverage of day three of the Tokyo Olympics. 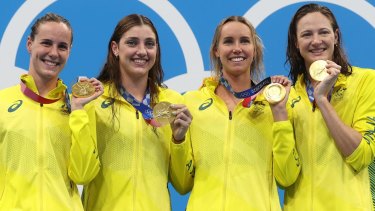 Can Australia win a second gold medal on Monday?Credit:Getty

Australia’s swimmers continue their quest for gold today but they’re far from the only medal hopes in action.

Keep it tuned to this page to find out where to watch the best Australian action, coverage of every medal across the Games, breaking news and much more.