Tom Lynch can't wait for the opportunity to learn more about his craft alongside Richmond champion Jack Riewoldt when he officially joins the Tigers during the upcoming free agency period.

Speaking at the TAB's spring carnival launch just hours after informing the Suns he wanted to join the Tigers in 2019. the 25-year-old said he had already a text exchange with the three-time Coleman medallist. 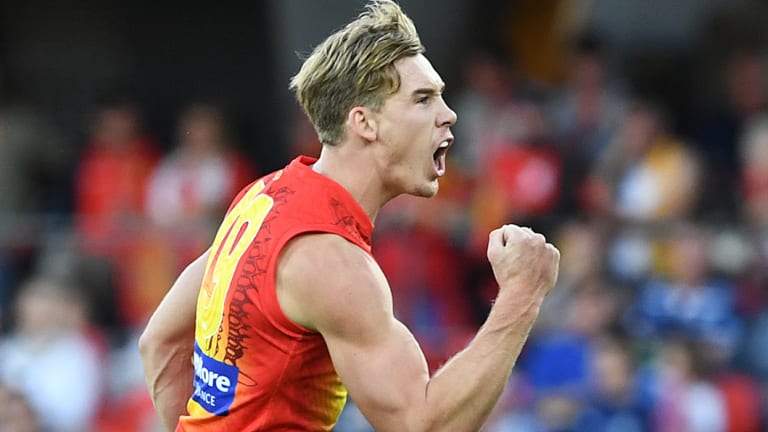 Tom Lynch has told the Suns he wants to move to Richmond.

"It will be nice to play alongside Jack Riewoldt," Lynch said.

Part of the Tigers' pitch to Lynch was that they needed someone to support Riewoldt inside 50 and they saw him as the man to do the job.

"It will be nice to get to know him and the boys over pre-season," Lynch said.

The decision was no surprise, with Fairfax Media reporting Lynch’s intentions at the start of last month.

He said it was strange watching the Tigers play finals as he felt in limbo but he wanted to help them reach their goal of winning another flag.

His manager Robbie D'Orazio said if the Suns had been playing finals then Lynch probably would have remained with the club that recruited him in 2010.

"It is his time to come home, play in front of big crowds," D'Orazio said.

"I remember watching the prelim last year … and I thought Tom Lynch probably belongs out on this ground and he has done everything he can for Gold Coast."

The Suns put out a statement on Tuesday saying they had been officially informed that Richmond would lodge Lynch's new contract with the AFL at the start of the free agency period on Friday.

The Suns can then choose to match Lynch's offer in order to force the Tigers to trade with them.

However the Suns are not expected to match the offer, preferring to take a compensation selection from the AFL which is expected to be pick No.3 in November's national draft.