Group 1-winning trainer Tony McEvoy said he felt "sick in the guts" when he heard that jiggers had been found at Darren Weir's stables in Ballarat.

His reaction was to send correspondence to racing authorities, including Racing Victoria's Integrity Department to ensure they understood the reluctance of both him and his owners to race against Weir-trained horses while the investigation was under way. 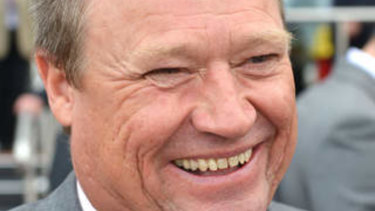 The stewards charged Weir and fellow trainer Jarrod McLean last Friday and ordered that all their horses be scratched until the show-cause hearings were held the following Monday.

McLean, who will contest the charges, is allowed to train horses under his care until the hearing, meaning the group 1 winner Trap for Fools will run in race nine at Caulfield.

McEvoy said he was pleased with the action the stewards eventually took to stand down and then disqualify Weir.

"It's a hard game and I have been building my brand for 10 years and I have just started to see some fruits [for my labour] and to have one of your competitors doing this just makes me sick in the guts," McEvoy said.

"It's a hard game. We all work very, very hard and to see all this come out is just gut-wrenching but I can assure everyone that it is isolated …. It is a tremendous game.

"Ninety nine percent of those in the game are clean and trying hard and loving the game in the spirit that it should be loved."

He commended the racing authorities for the action they took against Weir, who was disqualified from being involved in racing for four years.

McEvoy said the events of the past 10 days had set back the sport but he commended the authorities for their action.

"We have got to work hard to make sure that the integrity of this sport is held very high and get people to be confident to get involved in the game again," McEvoy said.

McEvoy will train six runners at Caulfield on Saturday with mares I'm A Princess and Bring Me Roses running against the McLean-trained Trap for Fools in race nine.