Lewis said the playing group had not reviewed the 65-point drubbing, nor did they plan to.

“We haven’t reviewed it … our review of the season was more holistic,” said Lewis.

“From a playing point of view you’re still hurting … it’s probably still too raw to go back and watch it.”

“For whatever reason, and we still can’t put our finger on it, we had a really bad day,” he said.

Lewis stressed the positives from the 2018 season: “We had two really good games leading up to that and we hadn't played finals for 12 years, so I think in whole it was a really good season.” 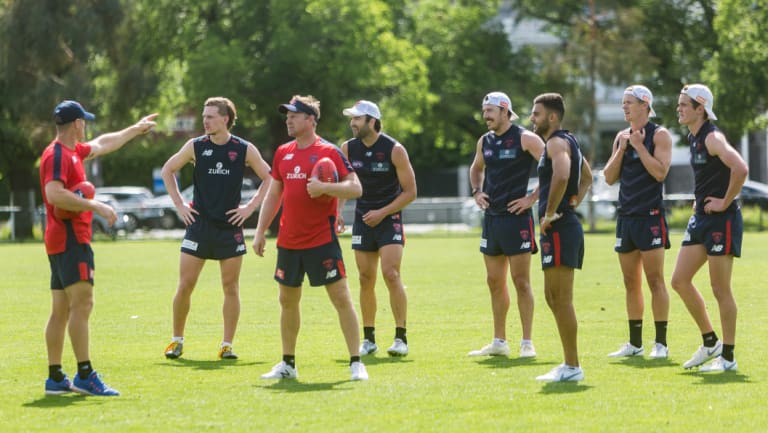 The recruits will be banging down the door of coach Simon Goodwin come round one, and along with fit-again Jayden Hunt and Jake Lever will provide stiff competition for spots in the Melbourne side.

Lever is set to return to training on Monday according to Lewis, after having minor surgery to clean up scarring around his reconstructed knee.

Lewis was sanguine about the possibility of playing VFL football next season if teammates moved ahead of him in the pecking order.

“If you play well you stay in the side and if you don’t you find yourself in the reserves,” said Lewis.

Lewis, who finished third in last season's best and fairest, was calm about the potential for next season to be his last in the league, something he has discussed with Goodwin.

“It could be my last year,” Lewis acknowledged.

“You’ve got to be realistic in that sense. It is the last year of my deal and as a 32-year-old you really need to perform to stay in the AFL system.”

The possibility for a full-stop on Lewis’ career in September 2019 is conditioning the way Lewis approaches this pre-season.

“I’d be kidding myself if I didn’t approach it that way (as his last),” he said.

“The way I’m training and preparing for next year, I certainly want to give it everything.”

The four-time Hawthorn premiership player is still keeping a close eye on proceedings at Waverley Park, tipping midfielders Liam Shiels and Isaac Smith as the “front-runners” for the recently vacated Hawk captaincy.

Defender Ben Stratton, another player flagged as a Hawks leadership aspirant, would be “up there (in the voting for the captaincy) if he wanted to do it,” according to Lewis.

“But he’s the kind of guy who’d want to enjoy the leadership position without being captain,” he said.

Lewis was understanding of Jarryd Roughead’s decision to stand down, saying “perspective changes when you have a young family”.

“Unless you’ve been a captain of a footy club you don’t actually understand how much time of your life it consumes.”

Lewis praised his close friend’s decision to lead the Hawks after a battle with skin cancer.

“It was a very brave decision coming back from what he did,” he said.