FLOYD MAYWEATHER has been crowned the greatest boxer of all time.

The retired 50-0 king is ranked miles ahead of second-placed Manny Pacquiao in the table from respected boxing site BoxRec. 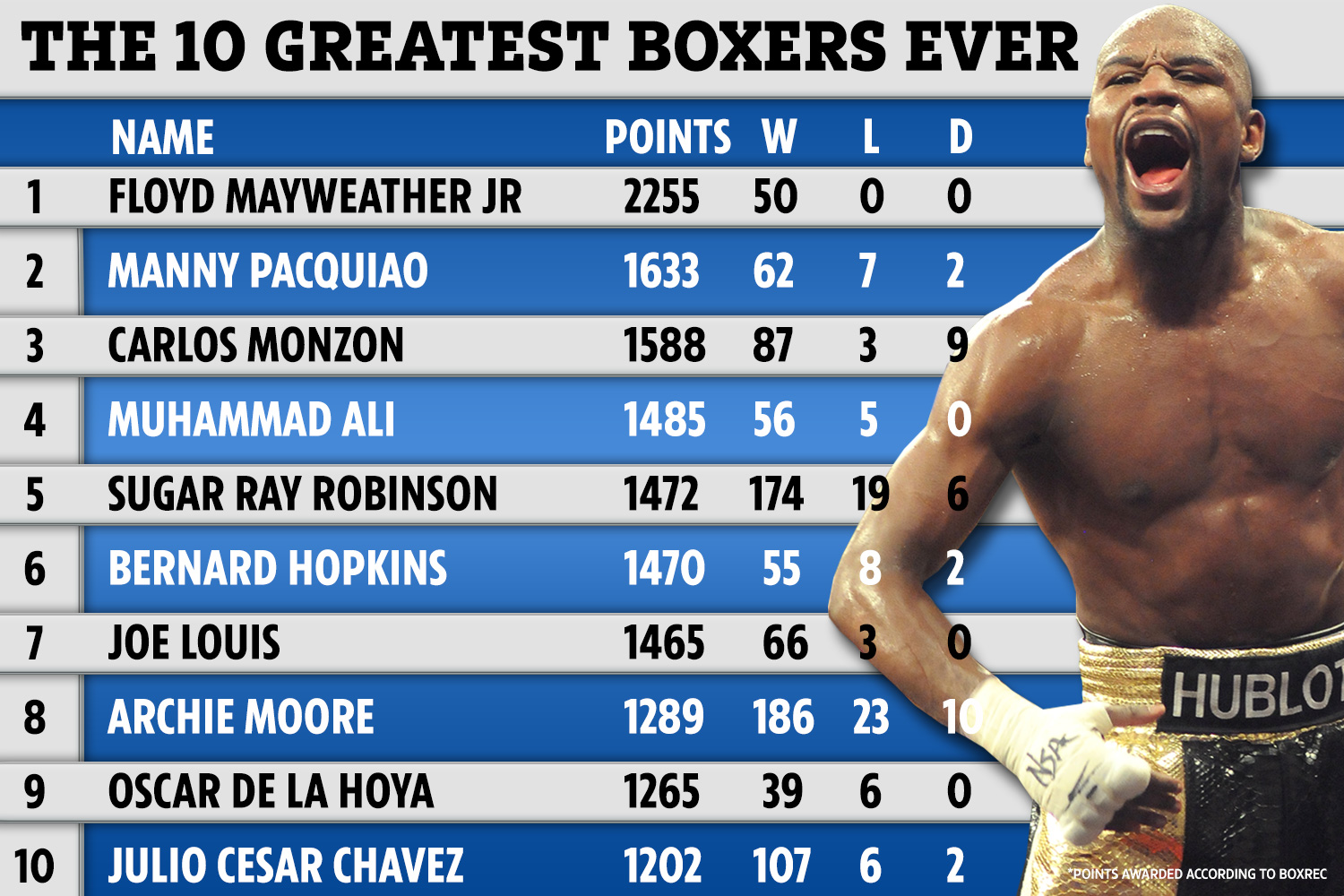 Mayweather, 42, from Michigan, US, never lost during his 21-year professional career and his ranking at the top of the pile is another jab at his fierce rival from the Philippines.

Here, SunSport runs down the top ten – a lucrative list even the likes of Evander Holyfield, Roberto Duran and Rocky Marciano could not make.

'MONEY' held multiple world titles in five weight classes and is not only regarded as one of the greatest defensive boxers ever but the most accurate.

Forbes listed the 5ft 8ins champion as the highest earning athlete in the world from 2012 to 2015.

The only active boxer on the list, Pacquiao, 41, is the only eight-division world champion in the history of boxing.

A current senator in his native Philippines, Pacquiao demolished Oscar De La Hoya into retirement in December 2008, obliterated Ricky Hatton in May 2009… but lost to Mayweather in the Fight of the Century in 2015.

Argentine playboy who died in 1995 held the undisputed middleweight championship for seven years and recorded 59 knockouts during his career.

However, he has been largely banished from the annals of boxing after he was sentenced to 11 years in prison for killing his wife Alicia Muniz in 1988.

No one touches 'The Greatest' for cultural, social and political impact – and his boxing record may well have been even better had he not lost three years of his career after refusing to fight in the Vietnam War from 1967 to 1970.

The image of Ali standing over a battered Sonny Liston is one of sport's most iconic and his Thrilla in Manila win over Joe Frazier in 1975 the most famous boxing fight ever. 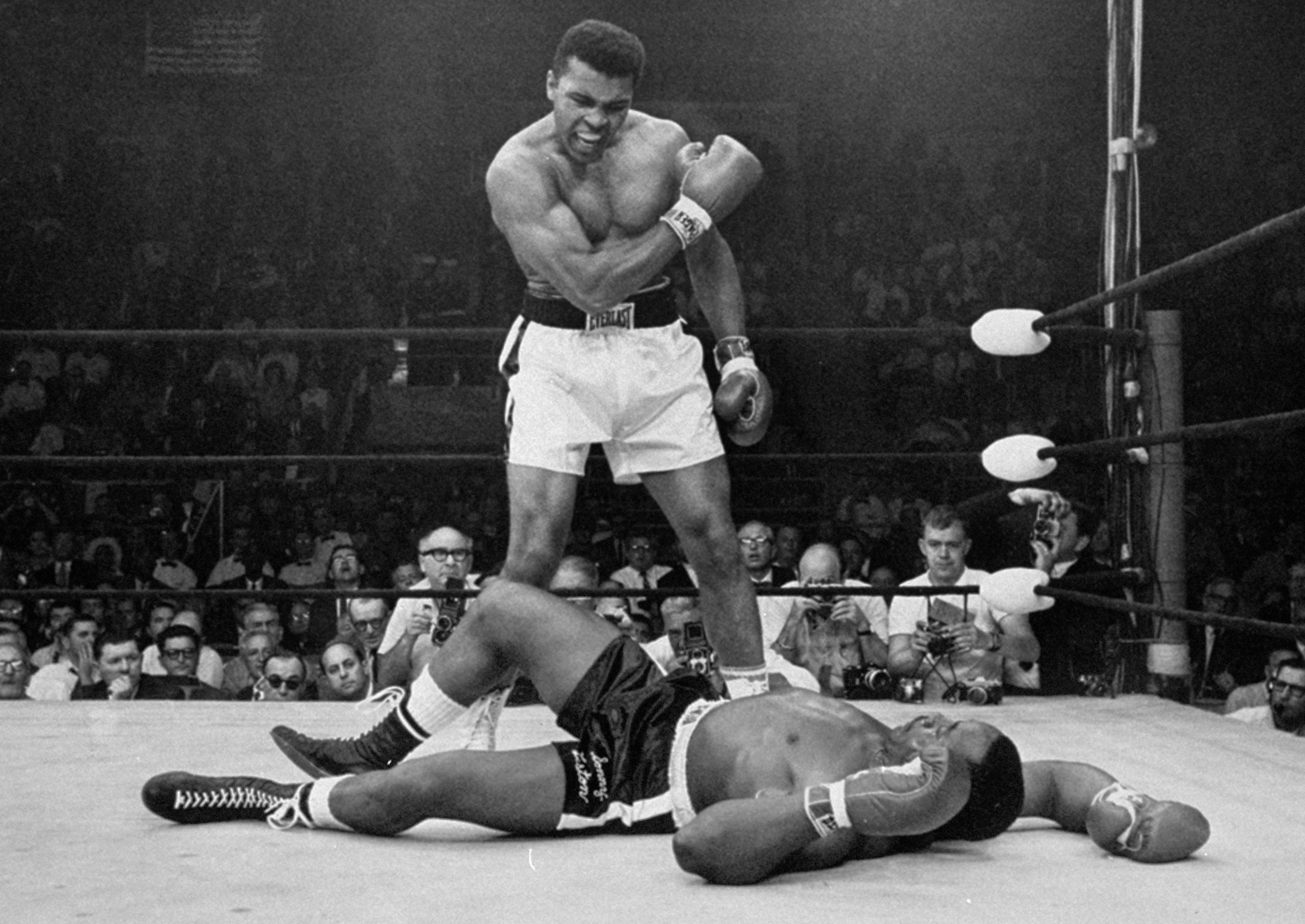 Robinson's performances at lightweight, welterweight, middleweight and light heavyweight were so seminal that they prompted journalists to create the "pound for pound" rankings.

'The Executioner', 54, was famed for his power and ability to pick opponents off on the counter.

He held multiple world championships at middleweight and light heavyweight and credited his mastery of the fundamentals as a reason for his career lasting 28 years.

More than that, he is widely regarded as one of the first black athletes to achieve the status of national hero in the US. He died in 1981.

"Mongoose" is the longest reigning world light heavyweight champion of all time.

He held the crown from December 1952 to May 1962 and though he had a great chin which could take a pounding, he was respected as a highly strategic and defensive pugilist. Died in 1998.

At the time of his retirement in April 2009, De La Hoya, now 46, was the most popular boxer in the world.

He won ten world titles in six divisions and started boxing at the age of five, but is now a successful businessman having founded Golden Boy Promotions.

Mexican competed from 1980 to 2005 and was a multiple world champion in three weight divisions: super featherweight, lightweight and light welterweight.

Chavez, 57, holds the record for the most successful defences of world titles at 27 and, before his first professional loss to Frankie Randall in 1994, had gone on an 87-fight win streak.