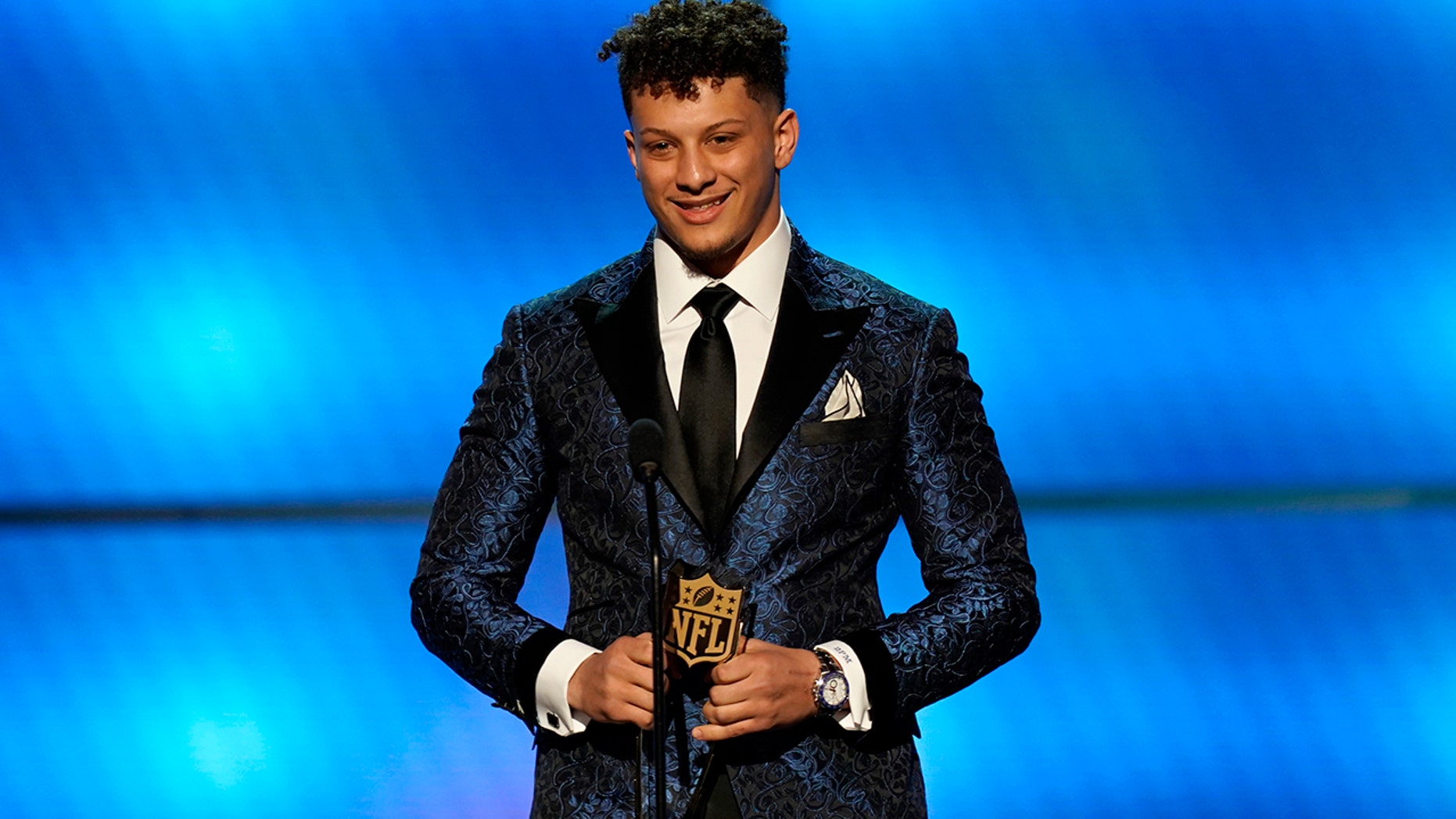 Patrick Mahomes of the Kansas City Chiefs accepts the award for AP offensive player of the year at the 8th Annual NFL Honors at The Fox Theatre on Saturday, Feb. 2, 2019, in Atlanta. (NFL/AP Images)

The Chiefs quarterback landed a pair of honors at NFL Honors on Saturday night, taking The Associated Press 2018 MVP and Offensive Player of the Year awards. In his second pro season, Mahomes led Kansas City to its first AFC title game since 1993 with some of the most creative and clutch plays the league has seen in years.

"I'm so humbled," he said. "This is just the beginning. We've got a long ways to go.

"It is an honor. It's a hard award to win. The next award I hope I can get is the Super Bowl."

Mahomes received 41 votes from a nationwide panel of media members who regularly cover the league. New Orleans quarterback Drew Brees got the other nine.

With only one previous start, Mahomes entered the season as something of a curiosity in Kansas City after the Chiefs traded veteran Alex Smith to open up the job. It didn't take long to erase any doubts as Mahomes led the Chiefs to their first AFC title game since the 1993 season, throwing for 50 touchdowns, 5,097 yards and had a 113.8 QB rating, trailing only Brees. 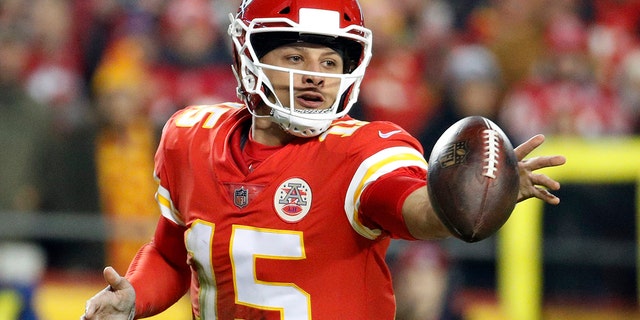 Mahomes' ingenuity — the guy can throw from all angles and make plays inside and outside the pocket — energized the Chiefs' fan base and excited fans across the league.

"The play is never dead. He can find new ways to get you the ball," Chiefs All-Pro tight end Travis Kelce said. "It may look like a screwball, a slider here or there, but it'll get to you eventually."

Mahomes is the sixth straight quarterback and 11th of the past 12 years to win MVP. No Kansas City player had won the award since the Chiefs joined the NFL in 1970.

Earlier, he was selected as the top offensive player, beating Brees 30 votes to 16.

"Yeah, I mean, it's awesome … I got put into a great situation," he said. "I got to learn behind a great quarterback in Alex Smith. I got to be on a team with a lot of playmakers who helped me excel my game and make me look really good on a daily basis. And, then, to be able to go out there and win football games in front of a passionate fan base is something I get the luxury of doing."

Donald, the only unanimous All-Pro this season and the first Rams player selected for top defensive honor, joins Lawrence Taylor and J.J. Watt as players to win the award in back-to-back seasons. Donald led the NFL with 20½ sacks.

"Any time you put a body of work into it and then it pays off," Donald said, "and you're rewarded for it, it means a lot. It's a blessing." 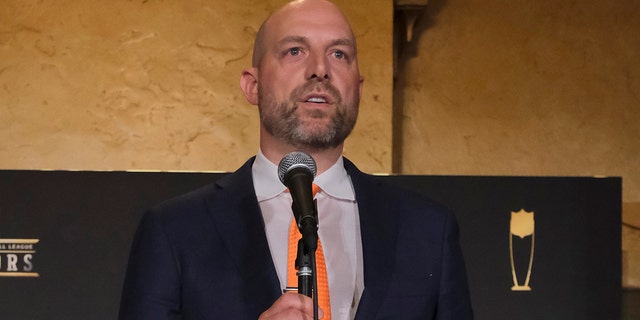 Coach of the Chicago Bears Matt Nagy, winner of the award from AP coach of the year, poses in the press room. (Photo by AJ Mast/Invision for NFL/AP Images)

Chicago's Matt Nagy, in his first season with the Bears, was voted Coach of the Year.

Nagy has overseen the development of quarterback Mitchell Trubisky, who blossomed in his second pro season, and saw a defense befitting the "Monsters of the Midway" dominate opponents at times. He is the fifth Bears coach to win the award, joining team founder George Halas (1963, 1965), Mike Ditka (1985, 1988), Dick Jauron (2001) and Lovie Smith (2005).

"It's crazy to think this is one person, so for me, it's being a part of this organization and for our players," Nagy said. "Just being able to believe in what we wanted to do with our culture and then follow through with it." 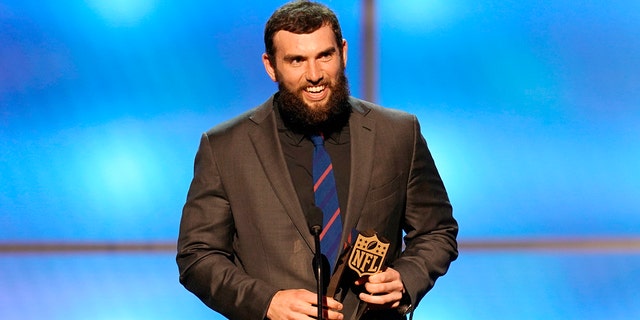 Andrew Luck of the Indianapolis Colts accepts the award for AP comeback player of the year. (Photo by Paul Abell/Invision for NFL/AP Images)

Colts quarterback Andrew Luck was chosen the Comeback Player of the Year, following a lost 2017 season to a shoulder injury with a sensational 2018 campaign.

"I truly believe there are players on every team, every roster that could be Comeback Player of the Year in their own ways," he said. "Honestly, the best part was playing football again — having fun playing football and being pain free." 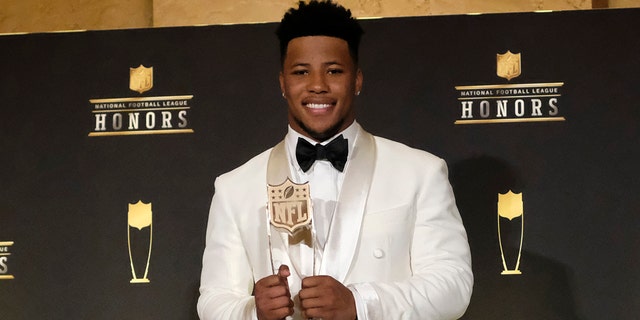 Saquon Barkley, of the New York Giants, poses with the award for AP offensive rookie of the year.  (Photo by AJ Mast/Invision for NFL/AP Images)

Described by some as a "generational running back," Barkley rushed for 1,307 yards and 11 touchdowns behind a weak New York offensive line. He drew 26½ votes and edged Baker Mayfield. The Cleveland quarterback who was selected first overall in the draft, one spot in front of Barkley, earned 21½ votes.

Barkley also made a team-high 91 receptions for 721 yards, and his 2,028 yards from scrimmage led the NFL.

For his work as defensive coordinator of the Chicago Bears, Vic Fangio got the head coaching gig in Denver. He also won The Associated Press 2018 NFL Assistant Coach of the Year Award on Saturday.

"I don't know, I'm very humbled," Long said. "It's hard to feel deserving with those guys on stage and, obviously, this guy right here on the statue. It's a very heavy statue and it makes sense because his legacy is immense. I'm just honored."