Nic Maddinson’s return to the cricket spotlight has been rudely interrupted with the former Test batsman expected to miss four to six weeks after breaking his arm while batting for Victoria on Sunday.

Only two days after making a sublime century in his first Sheffield Shield game for the Vics since moving from NSW, Maddinson was struck on the right arm, near the wrist, by a bouncer from West Australian speedster Jhye Richardson. 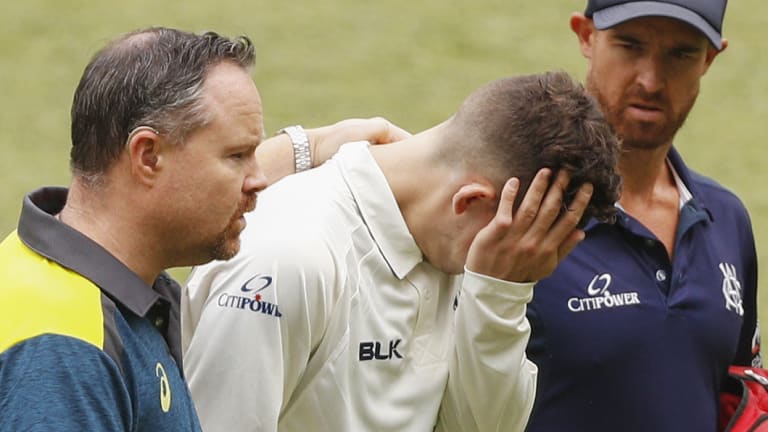 Maddinson, 26, immediately winced and after being assessed by medical staff he retired hurt on 10, with an early tea taken on day three.

Maddinson was taken for scans at Epworth Hospital, with Victoria confirming on Sunday evening that Maddinson's ulna had been fractured and requires surgery.

It is a cruel blow for the left-hander, who moved to Melbourne after being dumped by NSW at the end of last season and had to fight his way into the Victorian setup, having initially missed a contract with his new state.

The injury also comes less than a fortnight from the start of the Big Bash League season where Maddinson – who has played T20 cricket for Australia this year – was set to play a big role for the Melbourne Stars, having joined them from the Sydney Sixers. The Stars remain hopeful Maddinson will still be able to feature in the back half in the tournament. 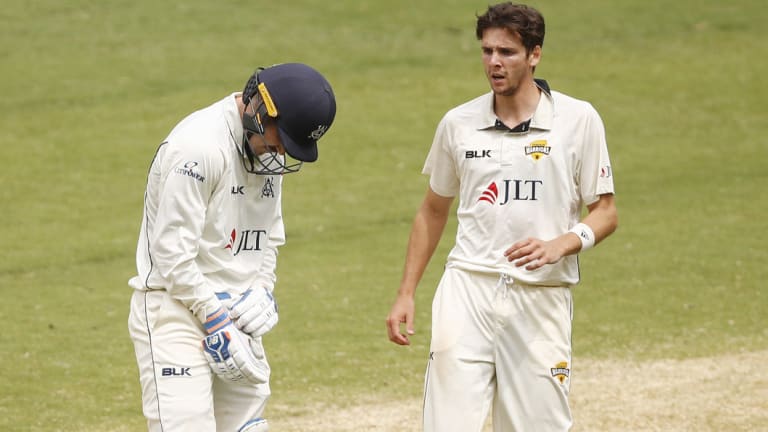 Jyhe Richardson (right) checks on Nic Maddinson after he was struck on the arm by a bouncer.Credit:AAP

There was still plenty to like however from a Victorian perspective, with the hosts poised to push for outright victory on Monday.

Victoria were 0-112 in their second innings at stumps, leading by 240. Will Pucovski and stand-in captain Travis Dean both reached 50 late in the day and remained unbeaten at the close.

The knocks were significant for both players. Prodigious youngster Pucovski is playing his first Shield game since taking a break as he experienced mental health issues, while Dean has had a lean start to the season.

Earlier in the day, left-arm tweaker Jon Holland returned to form by ripping through WA's middle order. A plucky 80 from Ashton Turner frustrated Victoria's charge, but Holland bowled with discipline either side of lunch to finish with 5-65, his eighth first-class five-wicket haul. 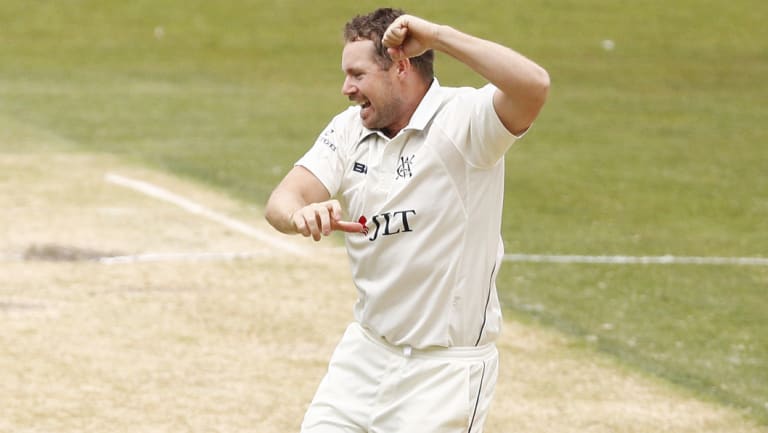 "The wicket is playing pretty well, so it's going to be difficult to take 10 wickets tomorrow," Holland said.

Holland struggled to make an impact during the recent Test tour of the United Arab Emirates and broke his finger while batting late in the second Test, delaying his return to state cricket. He said he had received a little bit of feedback from national selector Trevor Hohns, who was on duty at the MCG on Sunday, but acknowledged his international chances were likely to be limited going forward.

"I probably didn't bowl as well as I would have liked in the UAE, and didn't get much result," Holland said.

Meanwhile axed Test batsman Marnus Labuschagne was 58 not out at stumps on day three with Queensland 2-164 in pursuit of 414 against Tasmania in Hobart. Earlier, veteran George Bailey made 109 for the Tigers in their second innings, while Mitchell Swepson took 4-99 for the Bulls.

In Sydney, Moises Henriques fell one run short of a century as NSW posted 8-541 declared in their first innings against South Australia. In-form paceman Daniel Worrall was limited to just 10 overs due to a back complaint. The Redbacks reached stumps at 0-18 in their second innings, trailing by 143 runs with a day to play.