Adam Scott says changes made during the past two years are beginning to pay off as he eyes a return to the winner's circle.

Scott has made coaching changes, putting adjustments, trialled playing in three-week blocs and in tournaments immediately before the four majors. 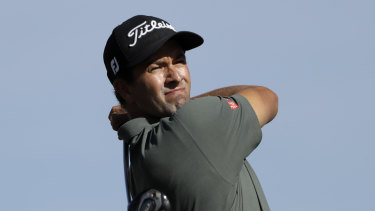 Adam Scott is hoping to use his good form at Torrey Pines as a springboard.Credit:AP

The process reached its low point in the first half of last year when Scott struggled to qualify for the US Open and plummeted to 76th in the world rankings.

But the former world No.1 is on his way back from the doldrums, having come runner-up to Justin Rose at Torrey Pines last month, improving his ranking to No.31.

Although the Queenslander's drought is almost out to three years, Scott feels he is on the cusp of reclaiming his top form as he prepares for this week's Pebble Beach Pro Am in California.

"I have made lots of changes over the last few years and think my game is close," Scott said on Wednesday.

"Obviously, one week [at Torrey Pines] doesn't compare to three straight years of me playing at the highest level [between 2013 and 2016].

"But I can see now my good golf is the highest level, which is encouraging."

Scott reunited last year with former swing coach and brother-in-law Brad Malone, who worked with Scott in the years leading up to his historic 2013 Masters win at Augusta National.

At Torrey Pines, smooth-swinging Scott found success in adopting an arm-lock putting grip with a longer putter, ranking in the top 15 on the greens at the Farmers Insurance Open.

"If you ask Brad, I'm swinging the club really well and that confidence compounding over the next month could be really positive before the majors and big events this year," Scott said.

"Now, I feel like I'm going to have a good score every time I tee it up and I haven't had that consistency for a while. I'm on my way to getting it again," Scott said.

The father of two has also tweaked his schedule to fall in line with the PGA Tour bringing its calendar forward one month this year.

The 38-year-old is making his third start at the Pebble Beach Pro Am when he would usually still be on a break in Australia.

Scott is joined in the field by fellow Australian Jason Day, who finished runner-up at Pebble Beach last year.