La Vendee: Richie Porte, Australia’s big hope for victory in the 3351km Tour de France that starts on Saturday, took a lot from observing the four times defending champion Chris Froome win the Giro d’Italia in May. He liked what he saw.

“It was nice to watch him win the Giro and I hope he's buggered. He might be,” a smiling Porte, the leader of the BMC Racing team, said of his former British Sky teammate. 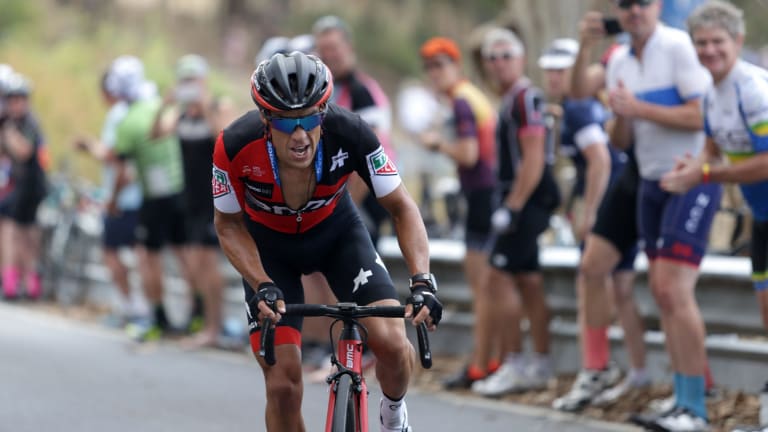 The 33-year-old, whose sights are set on at least making the podium, did not go as far as to say that he expects Froome to fade due to a Giro effort that made him the third rider to hold all three grand titles at once after wins in last year’s Tour and Vuelta a Espańa. But Porte did raise the possibility of it.

And recent history suggests the prospect of Froome fading is even a probability.

After all, no rider has won the Giro and Tour in the same year since Italian Marco Pantani in 1998.

Porte also knows how hard racing both events is, let alone winning them. He rode the Giro and Tour in 2011 as a domestique rather than contender, and for the retired Spaniard Alberto Contador, who won that Giro then faded to fifth in the Tour.

Porte recalled that Contador "crushed it in the Giro … but couldn't back it up in the Tour.” He added of Froome: “Chris was at the Giro with a strong team and here in the Tour with arguably a stronger team. If anyone is able to do it, then perhaps it is him. He's won the last four grand tours he's done. I know that team, riding there for four years. He's here with the goal of winning it. He's probably done the right work to do that. Like I said before, I hope he is tired.”

If Froome, 33, shows any sign of fatigue, Porte believes that he will be attacked from all angles, especially from those favourites who could lose early time in Monday’s stage three team time trial at Cholet. They are Colombian Nairo Quintana (Movistar), the 2015 and 2013 Tour runner-up, and third place getter in 2016 who won the Giro in 2014 and Vuelta in 2016; and Italian Vincenzo Nibali (Bahrain-Merida), who won the 2014 Tour, the 2013 and 2016 Giro and 2010 Vuelta.

“Guys like Vincenzo and Nairo are not going to give him an easy day,” Porte said. “If [Froome] does have a bad day, there are quite a few guys ready to end his winning streak.”

But many know that “if” is far from a given in the Tour, especially in light of Froome’s recent successes, and the added motivation from being cleared this week by WADA and the Union Cycliste Internationale for an excessive level of salbutamol recorded during stage 18 of last year’s Vuelta.

All Porte would say on Froome’s case, which was made public after being leaked, was to blame whoever publicly released his ‘presumed Adverse Analytical Finding’. The  process was meant to have been kept confidential pending the outcome.

“Whether you like Chris or not, he had the right to have his privacy respected,” Porte said when asked about the issue. “I think that's more the story, where did the leak come from?”

Top on Porte’s mind is his performance in the Tour, and the fact that trying to win it or make the podium, is not just about beating Froome, but other riders too. With Froome, Quintana and Nibali as contenders are Quintana’s Spanish teammates Alejandro Valverde, who was third in 2016 but crashed out on stage one last year, and Mikel Landa, who was fourth last year; Frenchman Romain Bardet (Ag2r-La Mondiale), who was third last year; Colombian Rigoberto Uran (EF Education First-Drapac), who placed second in 2017; Dutchman Tom Dumoulin (Team Sunweb), who won the 2017 Giro and was second to Froome in it this year; Briton Adam Yates (Mitchelton-Scott), who was fourth in the 2016 Tour; Ireland’s Dan Martin (United Arab Emirates), sixth last year; and Dane Jacob Fuglsang (Astana), seventh in 2013. 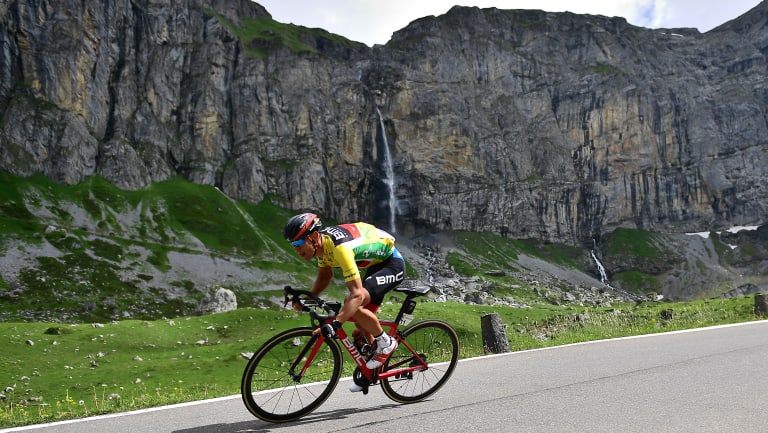 In fine form: Porte during his Tour de Suisse victory.

“You can't get transfixed on one guy. There are so many twists and turns in the Tour. I don't think there's one favourite overall,” said Porte, whose best overall result is fifth in 2016 and who was well placed to better that last year until he withdrew after a high-speed crash descending the Mont du Chat in stage nine.

Asked about the expected impact of a three-pronged attack from the Spanish Movistar team with three of their riders – Quintana, Valverde and Landa – being among those favourites, Porte said: “It's easy to have those options, but you have to use them wisely. Who knows how harmonious it is in that team. It's hard enough having two leaders, let alone three.”

Importantly, Porte and BMC are ready to take them all on.

Porte is in super form off the back of his recent overall win in the Tour du Suisse. Since then he has trained at his base in Monaco, and undergone a training camp in the French Alps.

With his wife Gemma, Porte has also spent precious time with his new baby Luca, born just before the Tour du Suisse.

However, Porte also knows that at his age, opportunities like what awaits him won't come around forever.

“I'm not getting any younger,” Porte said. “We have a super team this year. The first nine stages are pretty tricky, but we have the horsepower to get us through the first nine stages. I'm super motivated for this Tour. We had the jersey on the first day in the Tour de Suisse, and the guys were incredibly strong. I hope for good luck and no bad luck on the road.”

Coming up this weekend on the Tour:

Stage one on a flat north to south route that hugs the Atlantic Ocean coast should provide the first foray of helter skelter bunch sprinting. For the overall contenders like Porte, the priority will be to avoid any crashes and/or losing time from splits in the bunch caused by any crashes or wind.

Sunday: Stage 2 – Mouilleron-Saint-Germain to La Roche-Sur-Yon, 182.5km: Stage one will provide a form guide for what to expect in this second stage that follows an anti-clockwise land route which should again end in a bunch sprint. Apart from a fourth category climb early, the stage is again mostly flat and offers Saturday’s winner a chance to exert authority and defend the yellow leader’s jersey for another day, or for those who he beat to get their own back.