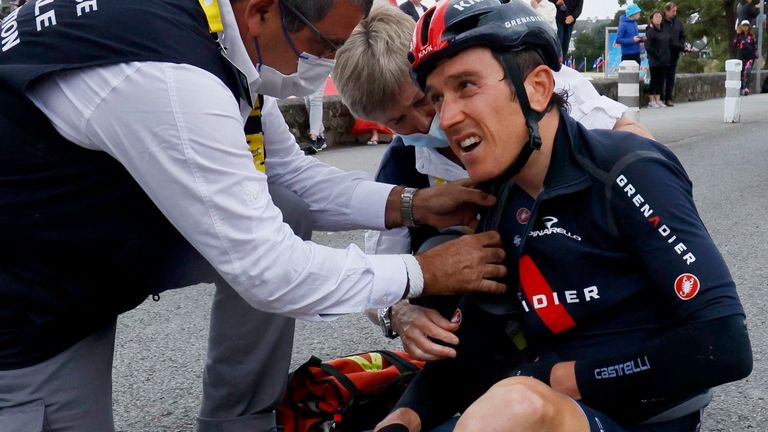 Geraint Thomas will be reassessed on Tuesday morning after a scan revealed he did not suffer a fracture in a crash during stage three of the Tour de France.

The Ineos Grenadiers leader dislocated his shoulder after coming down in damp conditions early in the stage from Lorient to Pontivy, but continued on after race doctors managed to put his shoulder back in place at the roadside.

Thomas finished the stage 26 seconds behind winner Tim Merlier, who claimed his first victory at the Tour, and Alpecin-Fenix’s second in as many days. Merlier’s team-mate Mathieu van der Poel retains the race leader’s yellow jersey.

Following a post-stage scan and x-ray we're pleased to confirm @GeraintThomas86 has not suffered a fracture in his right shoulder. He will be reassessed in the morning before stage four #TDF2021 pic.twitter.com/Rgy0yBmZfF

On a crash-strewn day, one of the race favourites, Primoz Roglic, also suffered a painful tumble and lost time, while defending champion Tadej Pogacar was held up by an incident inside the last four kilometres.

Australian sprinter Caleb Ewan crashed within sight of the line, bringing down former world champion Peter Sagan in the process. Ewan sustained a broken collarbone, and later had to abandon the Tour. Roglic’s Jumbo-Visma team-mate Robert Gesink also left the race after coming down in the earlier incident with Thomas. 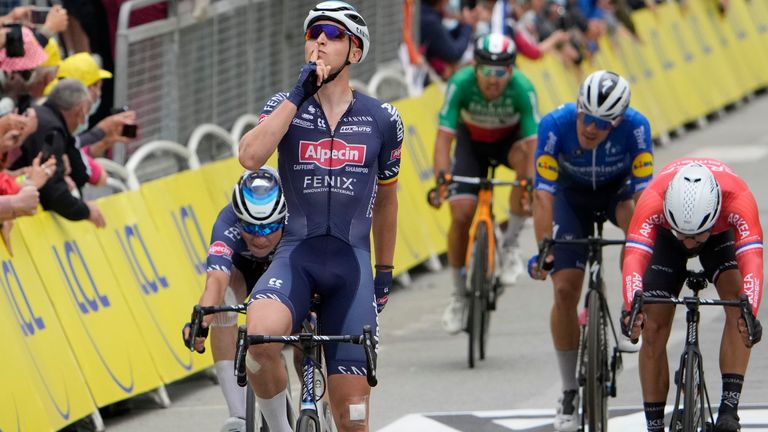 Mark Cavendish rolled in more than two minutes down after surveying some of the damage in the finale.

“I just count myself lucky I didn’t come down,” said the Manxman, who will hope for better when stage four heads to Fougeres – scene of his 2015 victory – on Tuesday.

“I saw Caleb when I was crossing the line and he didn’t look good, I just hope he’s OK. It looked sketchy. Though I didn’t get to sprint I think I was fortunate today.”

Amid the chaos, Van der Poel, Julian Alaphilippe and Richard Carapaz were the notable general classification riders to make it over the line in the front group, but there were time losses throughout the field with all but Ewan’s crash coming outside the final three kilometres.