The 800-meter women’s race in the Diamond League meet in Doha, Qatar, on Friday included only the best of the best female middle-distance runners. And it was the last chance for athletes affected by a new ruling on testosterone levels to run in a women’s race without medical intervention.

That ruling, which requires these athletes to take hormone-suppressing drugs and goes into effect Wednesday, began a week unlike any other in track and field history when it was delivered on May 1.

Two of the affected women entered the race in Dubai almost immediately, an act of defiance that became the latest salvo in a heated debate over whether competitors who track and field’s world governing body has determined are intersex athletes should be allowed in women’s races.

The debate has centered on a conflict between gender identity and athletic fairness, in part because it comes at a time when biology is no longer seen as the sole determinant of gender. And these athletes, who include South Africa’s Caster Semenya and Francine Niyonsaba of Burundi, identify themselves as women.

But the ruling is not about social norms. It is about sports and who should qualify to run in a handful of women’s races between 400 and 1,500 meters. And it is narrowly constructed, focusing only on athletes with a rare chromosomal makeup. Although the ruling has been widely characterized as saying that any woman with naturally high testosterone levels cannot compete in a women’s category without taking drugs to reduce her testosterone levels, that is not what it says.

The decision, issued last week by the Swiss-based Court of Arbitration for Sport, applies only to those defined by the International Association of Athletics Federations, or I.A.A.F., as intersex athletes. To be affected by the ruling, an athlete must have an X chromosome and a Y — “the standard male chromosomal pattern,” said Dr. Joshua Safer, executive director of the transgender program in the Mt. Sinai Health System. People with the combination of an X and a Y have long been defined as male. Women have been defined by two X’s.

The presence of a Y chromosome can lead to the development of biological characteristics associated with maleness, including higher levels of testosterone.

In addition to having Y chromosomes, the affected athletes must have what is called a disorder of sexual development, which means they have genitalia that are not typically male or female, Dr. Safer said. And, the ruling says, they must have testosterone levels in the male range, which is substantially higher than what athletes with two X chromosomes can naturally attain. 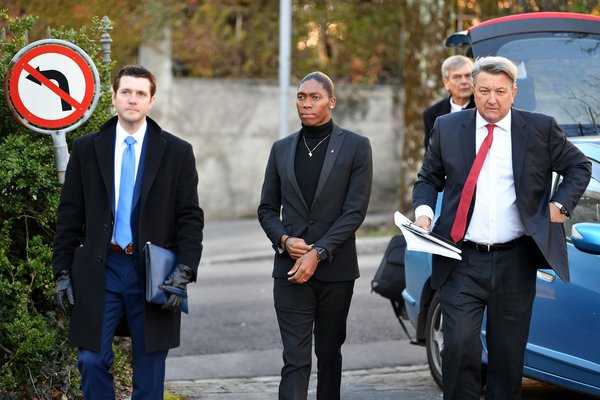 That implies they have either testicular tissue or actual testes, though intersex people often have ambiguous genitalia.

The first- and second-place finishers in the Qatar race were Semenya and Niyonsaba. The ruling specifically cites Semenya as an affected athlete, but Niyonsaba has said she, too, will be affected by the decision. Specific details of their biology have not been officially revealed. Both say the ruling is unfair.

In Qatar, Semenya and Niyonsaba blew away the competition — Semenya’s time was 1 minute 54.98 seconds. Niyonsaba’s was 1:57:75. Coming in third with a time of 1:58:83 was Ajee Wilson of the United States, who holds the American record in the event. Fourth was Nelly Jepkosgei, the third-fastest Kenyan in the world. Her time was 1:59. Fifth was a four-time N.C.A.A. champion, Raevyn Rogers, who finished in 1:59:07.

The question that has rankled the running world for a decade is whether the XX athletes have a chance competing against those who are intersex. Anyone competing at that level has to be a superb, well-trained athlete. Testosterone alone will not propel a runner from back of the pack to the podium.

But, according to a yearslong study from scientists working with the I.A.A.F., the extra testosterone helps, at least in shorter races. Endocrinologists agree that testosterone provides advantages that are not available to athletes with two X chromosomes. It increases the number of red blood cells, allowing more oxygen to get to muscles. It increases the size and power of skeletal muscles that produce more powerful strides.

Physiologists say that is why there are separate races for men and women. The best women in the world never have times as fast as those of the best men.

“The tension is between having something that feels fair to everybody and trying to be liberal in accepting every given individual who is participating,” Dr. Safer said.

The reasoning behind the ruling and the regulations that will go into effect Wednesday was that, yes, it would discriminate against the rare individuals with XY chromosomes and a disorder of sexual development, also called D.S.D. The condition as defined by the ruling is extremely rare — but there are no reliable estimates on how often it occurs, Dr. Safer said.

But, defenders of the ruling say, the alternative is to discriminate against the millions of XX athletes who do not have the advantage testosterone brings — unless they inject themselves with it, which would disqualify them from races.