The attacking midfielder signed a five-and-a-half-year deal on transfer deadline day keeping him with the club until June 2024. 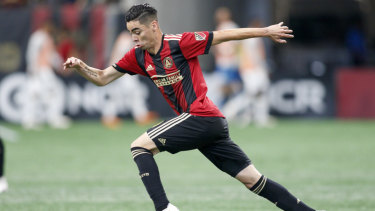 "The league is very competitive, this is a historic club, and Rafa Benitez himself were the main reasons why I am here now," Almiron told Newcastle's website.

"I think it is a great responsibility, something beautiful for me, and I will try to offer the best I can to repay the trust the club put in me."

Newcastle also announced they have signed former Italy under-21 international wing-back Antonio Barreca on loan from Monaco until the end of the season.

Arsenal also delved into the market with Spain international midfielder Denis Suarez arriving on loan until the end of the season from Barcelona. 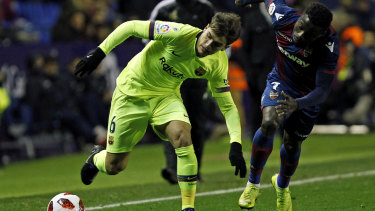 "We are very happy that Denis Suarez is joining us," Emery told the club website.

"He is a player we know well and I have worked with him at Sevilla. He brings us quality and options in many different attacking positions, so he'll be able to help the team."

Another Spain international is heading to the Premier League after wing-back Jonny Otto signed a permanent deal with Wolves after impressing during a spell on loan from Atletico Madrid.

The 24-year-old, who has played 22 matches for Wolves since arriving last year, signed a contract until 2023, the club said.

Media reports said the deal, which was the first major signing of transfer deadline day, is worth around £18 million ($23.65 million).

"The truth is that it was very easy to decide," he told Wolves' website.

"They are treating me very well, there are great staff, great team mates and great supporters. It is a big club and really, I am very happy to be here."

"From the first moment I thought that I came to a great club with great aspirations and I think things are working very well." 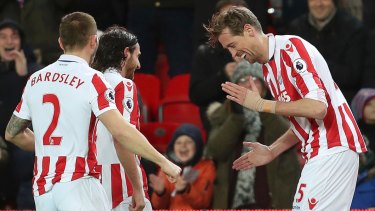 At age 38, Peter Crouch (right) is back in the Premier League.Credit:AP

Peter Crouch is back in the Premier League after completing a surprise deadline day move from Stoke to Burnley.

The 38-year-old former England striker has traded places with Wales international Sam Vokes, who has joined the Potters for an undisclosed fee.

Crouch, whose previous clubs include Tottenham, Liverpool and Aston Villa, has scored 108 goals in 462 top-flight games throughout his career.

He has joined the Clarets on a short-term deal until the end of the season, with manager Sean Dyche hoping the veteran can provide an extra boost in the battle against relegation.

Meanwhile, Manchester United forward Anthony Martial has signed a new deal that will keep him at Old Trafford until 2024.

France international Martial has made 162 appearances in all competitions for United and scored 46 goals since joining from French Ligue 1 side Monaco in 2015.

United have the option to extend the deal by a further year.

‘‘I’m loving my time at this club,’’ Martial said in a statement. 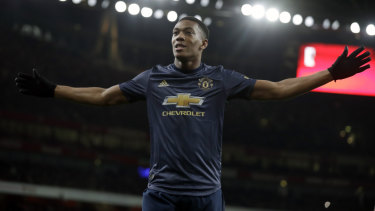 Manchester United’s Anthony Martial has signed a new long-term deal with the club.Credit:AP

‘‘From the day I joined I have been made to feel part of the United family and I have been incredibly humbled and overwhelmed by the warmth and love of our fans, who continue to amaze me with their support.’’

‘‘Anthony is one of those naturally gifted players that any coach would love to work with,’’ Solskjaer said.

‘‘For a young man, he has a good footballing brain. When coupled with his exceptional talent, that makes for a player with an exciting future ahead of him.’’