There are still three weeks remaining until Brad Fittler settles on his NSW side for the first game of the State of Origin series and Tom Trbojevic is racing against time to force his way in after an audition before the Blues coach that did not go to plan.

Fittler was on the sideline as part of the Channel 9 commentary team as Trbojevic went directly up against the other candidate for the Blues' fullback spot, James Tedesco, at Allianz Stadium on Sunday. 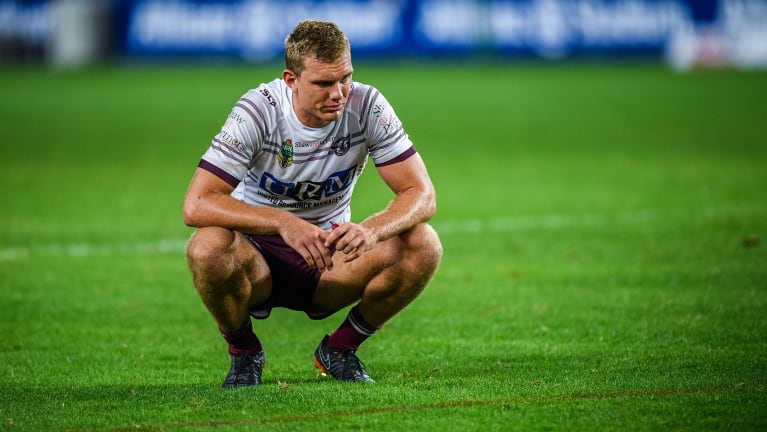 Dejected: Tom Trbojevic after the game.

The Sea Eagles No.1 was not only left disappointed by a two-point defeat, Manly's fifth in a row, but by an error-riddled personal display.

Trbojevic put down two high balls and made another handling error in attack during the second half and Manly coach Trent Barrett lamented the number of mistakes his team were making despite having improved their attitude.

"I thought Turbo had some brilliant touches, as he always does, but again he came up with a couple of errors at crucial times that we've just got to get out of our game across the board not just Tom," Barrett said.

"He'll be in there tomorrow watching his video and looking to improve. He's young but it's no excuse for us at this level. We've got to cut them out. He hurts as much as any one. It's a learning curve.

"He's still in the infancy, I suppose, of his first-grade career and he's going to play a hell of a lot of rep football down the track and he'll do a good job if he's chosen. But there are some things that we all need to tidy up across the board."

Under a salary cap squeeze and having been hit by injuries this season, Barrett is hopeful he won't be short another player against Brisbane on Saturday night after Dylan Walker was left grimacing by a cannonball-like tackle from Roosters winger Joseph Manu.

Walker, who the coach shifted to the halves rather than promoting out-of-favour Jackson Hastings, finished the game and is not considered in great doubt.

However, Barrett was concerned by the tackle itself, which was not penalised, and said he had raised the issue in general with referees official Tony Archer last week.

"I"m certainly not having a crack at the Roosters here but [the tackles] are dangerous," Barrett said.

"If we had have lost Walker there or if we do with a knee injury…he hyper-extended his knee pretty bad…it's just a dangerous tackle and there is more and more of them creeping in. Across the game, it's an awful one."

Roosters coach Trent Robinson said Manu had not been penalised because he tackled Walker "on the quad, above the knee".