Collingwood captain Scott Pendlebury has warned the Pies their buoyant 2018 is no guarantee of being reprised this year, as several stars work through their own training programs at the Magpies' Gold Coast camp.

The Pies have dissected the positives of what it meant to reach last year's grand final, and the events of that day when they led by two goals early in the final term. But they have also reflected on the heartbreaking final minutes when a controversial goal by Dom Sheed in time on gave the West Coast Eagles victory. 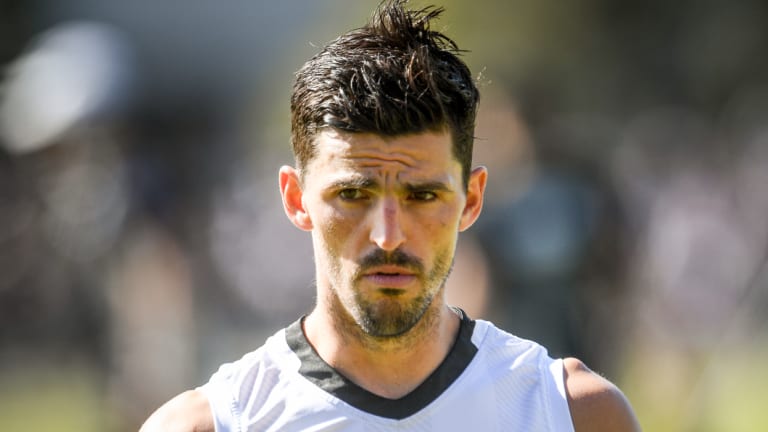 Scott Pendlebury says the Pies aren’t resting on their laurels as they prepare for season 2019.Credit:Justin McManus

Just returning to September last year was a breakthrough for the Magpies, having missed the finals since 2013, but that good work can be quickly lost, as the Western Bulldogs have discovered.

"As a group, when we got back in, we had a look at it [the grand final] – just a few things that we want to learn from. While it is disappointing, you have got to acknowledge the game and how it went down and what we can learn from it because we can't just wipe it," Pendlebury said.

"We took a few learnings from it but there were also a few things we did right on the day to put ourselves in a position to win a grand final, to get to the grand final. We learn from it but the journey starts again now. Just because we were there last year, doesn't mean we get the right to even get back to finals, so we know we have got to earn it.

"There doesn't seem to be too many guys or really anybody that's dropped their head or are still disappointed about the [grand final]. [It's] get back to work, as I said before. We know it's a new journey so just trying to rip into 2019."

The Pies used their Gold Coast camp last year to embrace a new game plan built around forward pressure and will hope this week's trip can provide a similar springboard.

They had match simulation on Monday but not all players, including Adam Treloar and Jordan De Goey, took part. Midfield ace Treloar had hamstring surgery last season but returned for the finals, while explosive goal-kicker De Goey nursed a foot issue through the second half of the season. He had been in full pre-season training until just before Christmas when the Pies denied he had strained a hamstring and had only sat out because of gastro.

"They are on their own programs. Last year they were both managed towards the back end with 'Ads' coming off that double hamstring surgery, and Jordy as well. When they are out there, they will be in full match simulation, but they are not out there at the moment," Pendlebury said.

Pendlebury said Daniel Wells was "tracking pretty well coming off that pretty horrific injury with his foot last year" while small forward Jamie Elliott had eased any concerns over a pre-Christmas hamstring issue.

"He is back running and kicking. I think that [hamstring fears] was a bit dramatised," he said.

The skipper said the Pies were hoping for a strong year from Darcy Moore, the potential swingman who managed only seven senior games last season, and none after round 20, because of hamstring issues.

"He is an impressive specimen, Darc, a great athlete and he is only getting better the more he can get out there and train. So, hopefully this year, we can get him on the park more often than not and he certainly adds a lot to our group," Pendlebury said.

All but confirming he will remain as skipper, Pendlebury said Dayne Beams, in his second stint at the club, and former Bulldog Jordan Roughead has settled in well and provided even more depth.

"We did have a lot of injuries last year but I don't think it was a big issue for us. We covered really well. You talk about having a squad mentality and we displayed that. So it's no different," he said.

"It probably brings to light how important it is because last year guys got opportunities when they they probably didn't think they would. Now when you say it, guys know that can happen.

"I think competition for spots is always hot. The more guys that get a taste of senior football and finals football and things like that, it really drives the hunger over the pre-season to try and get in and get a spot."