Newgate Farm boss Henry Field can’t wait for unbeaten Triple Crown winner Justify to stand as a stallion in Australia after watching the colt he helped buy win the Belmont Stakes on Sunday.

Field was trackside for the final leg of the Triple Crown in New York as Justify continued the incredible partnership of WinStar, the China Horse Club and SF Bloodstock, which started in Australia. 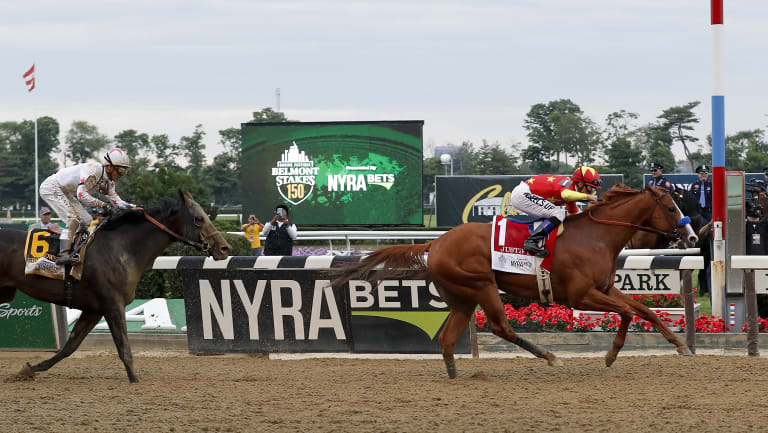 Superior: Justify carries the China Horse Club silks to victory in the Belmont Stakes to complete the Triple Crown.

“He would be the most valuable stallion outside Frankel ever to stand in the world, and we are fortunate to be part of the story,” Field said. “It was the day of lifetime to be here and see him make history, and he will be coming to Australia.”

Field has a habit of finding group 1 winners for SF Bloodstock, starting with Golden Slipper winner Capitalist , then Russian Revolution and now Justify.

“The only way we can be competitive with the big boys of the breeding world is by backing ourselves and finding these horses as yearlings,” Field said. “Capitalist, Russian Revolution and Justify didn’t cost $1 million between them in the ring but would be worth up to $200 million after their racing deeds. 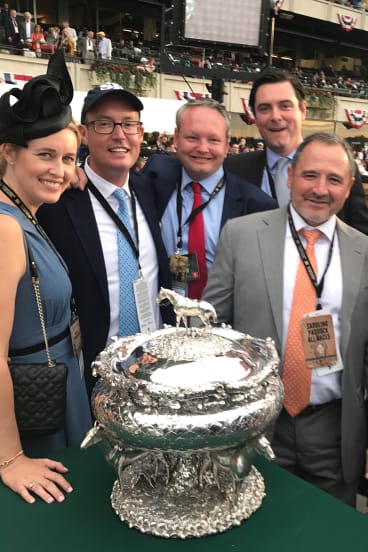 “When Justify arrives next year, we would have had the top-priced first-season stallion for three years, and that only comes from the backing of the China Horse Club, WinStar and SF. It is a dream really.”

Field spotted Justify at Keeneland Sales and was convinced he was the horse of the sale.

“He just had a confidence and an aura, like Capitalist and Russian Revolution. These horses have big walks and a presence,” he said. “They are mature and make you want to buy them.”

Field watched the race with the buying team, which included SF’s Tom Ryan and China Horse Club’s Michael Wallace. Carrying the  China Horse Club silks, the Scat Daddy-Stage Magic colt led all the way in the Belmont Stakes to become the 13th Triple Crown winner and only the second to do it unbeaten. The win capped the career of 52-year-old jockey Mike Smith, and was trainer Bob Baffert’s second Triple Crown winner after American Pharoah three years ago.

Baffert admitted that after Justify’s Kentucky Derby he felt there was a Triple Crown possibility.

"He was showing me the same signs [as American Pharoah], he showed me that same brilliance. Superior horse. I mean, he could have won every race on the undercard today. He's just that kind of horse," Baffert said.

Justify is expected to race on  and contest the Breeders Cup Classic in early November.