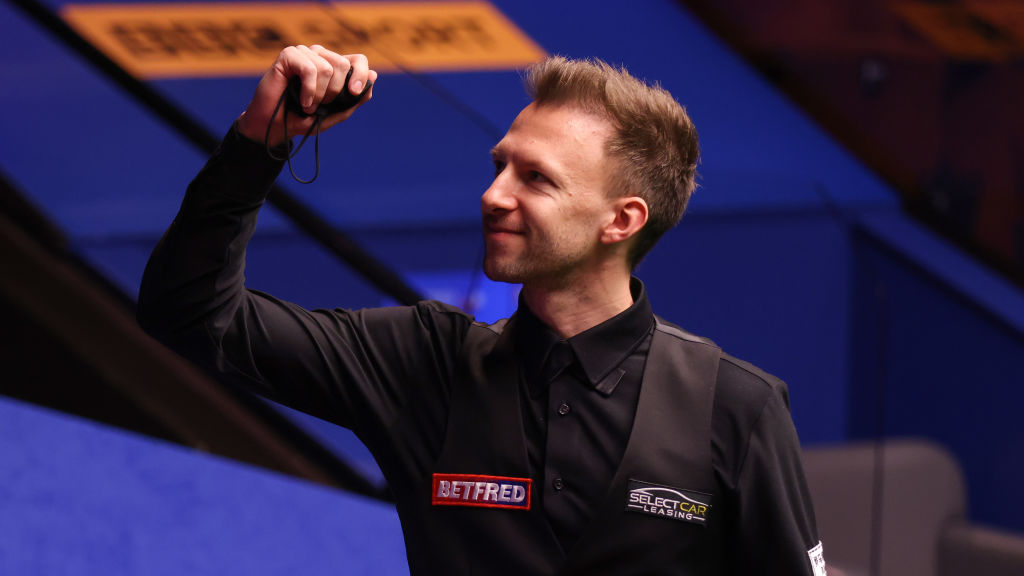 Judd Trump is going to test himself against some of the top pool players on the planet at the US Open next week and, although his preparation has been far from ideal, he is taking the opportunity to test the waters of the American market.

One of snooker’s biggest stars is heading to Atlantic City to see how he gets on in the world of 9-Ball, but he knows how tough it is going to be given that he has barely played the sport in years.

His US Open campaign begins on Monday against Joe Magee and the Ace is still yet to get hold of a pool cue, but with an intense few days of practice ahead, he is hoping to at least get through the first round.

‘I’d be happy to win a game,’ Trump told Metro.co.uk of his US Open chances. ‘We left it so late and I’ve just tried to experiment and do as much as I can with no snooker tournaments going on.

‘I’ve not even got a proper cue at the minute [Tuesday], I haven’t played since I was a kid, really. I expect absolutely nothing, I’m going there to see if I could ever do it more, if I could play pool and go back to snooker and not lose too much feel or anything. It’s a feeler event to go out there and test the water.’

Asked if he has snuck in any practice yet he said: ‘None. Absolutely none.

‘I always like to be prepared, I don’t like going with the attitude that I’m just there to enjoy it, that’s not what I’m about, I like going there knowing I can win it.

‘Deep down I know I can’t win it, but I’m getting a cue, I’ve got somewhere to practice for the next three days, I’ve got a table when I arrive so I can get going straight away.

‘I’ll have four or five days and that’s hopefully enough to win one or two games and see where I am, see the kind of level I’d need to get to and other snooker players can see where they need to be. It’s beneficial for everyone, I think, to try and make snooker and myself bigger in America.’

Trump knows that he will have something of a target on his back with the stars of the pool table out to prove that snooker players can’t just turn up and take them down.

‘All the top pool players are going to be gunning for me,’ he said. ‘In that way it helps that I haven’t really played, I haven’t got anything to lose, but in the future if I play again I’d certainly not be going in with that attitude, I’d put the work in, maybe put two months in over the summer to get better.

‘I don’t know my first round opponent, I’m hoping he’s as bad as me.’

The Juddernaut is not expecting to come home with the trophy, but he is hoping to come back with a new level of exposure in the States and some understanding of how snooker and pool can develop there and back in the UK.

‘It’s a new adventure,’ he said. ‘It’s nice to be able to see a bit more of America, try and promote my name and try and benefit both snooker and pool, try and make cue sports as big as possible.

‘I’ve seen the US Open on TV a few times, the Mosconi Cup as well. I’ve heard it’s the next sport that Matchroom are really pushing and looking to make as big as possible. I like all the ideas that Matchroom have with all their sports at the moment, the way they do it appeals to my age group.

‘It’s something I want to be involved with. It’s much more up to date, more modern and more in line with the year we’re in and values I want and who I want to appeal to.

‘To be a worldwide sport you’ve got to have the backing of America, I think. Pool has the potential to do that, whereas snooker is still struggling, that’s why I’ve gone over there to suss out the market and see what can be done.

‘Those team events against America are another level, the men’s and women’s golf. I’ve heard the crowds are going up by 20 per cent every year in the Mosconi Cup so who knows where it could be in five years, it could be 5,000-10,000 seat arenas. It’s got the potential to move on, get really big and that’s why I’m getting involved now.

‘I’ve never played in America before. In the UK everything’s quite polite except that rowdy crowd in London [at the Masters] and I can imagine America being similar to that.

‘There’ll be a lot more noise. It’s not good when you’re losing and I’m probably going to lose so it’s not good for me, but when you get on a winning streak in that kind of environment you can feel invincible.’

The world number two has snooker in mind during this foray into pool, with a dream of his to start cracking America with the sport he has dominated in recent years.

Judd has teased that he will likely be showing his skills with a snooker cue in the States in the near future, with an announcement on the way that will ‘send shocks through snooker’ in terms of breaking America.

‘We’ve been approached a couple of times and with one place we’re really close,’ Trump said of plans in the US. ‘There were a couple of different cities, one absolutely massive city that came in to try and get me.

‘It’s places that I didn’t think would even know anything about it. I’ve seen pictures of the clubs and hopefully that will get announced in the next couple of days and it will be amazing for snooker.

‘It will be amazing to get into doing exhibitions in America and if snooker is ever going to get big in America that’s probably how it’s going to have to start. Just like exhibitions you’d do in the UK but on a bigger scale, I’m hoping we can pull that off, I know it’s close and they’re serious. Hopefully that will be announced soon, it can send shocks through the snooker world and give some hope.

‘To get snooker over to America and back into Canada and to feel like I’ve helped the future of snooker, I’d take a lot of pride from that.

‘It’s a lot of hard work and hopefully behind the scenes, World Snooker can do a good job, maybe start an invitational event out there and who knows where it can go?

‘It’s got potential, it’s going to be tough because you’ve got to capture the attention of American sports fans. Sports there seem very in your face, so maybe we’ll have to change the format at first. Six reds or something like that, to grow the game, like in cricket with The Hundred and T20, maybe they have to do that.

‘Anything is bonus for snooker and I think anyone would be keen to get over there to grow the sport.’

Trump plays on the opening day of the US Open on Monday 13 September live on Sky Sports.