Canberra FC stretched their unbeaten run to eight games this season but it was Tuggeranong United who stole the show in round eight of the Canberra premier league on Sunday.

Tuggeranong went down 3-0 against the Monaro Panthers but scored four goals in the final 22 minutes to snatch victory in Googong. 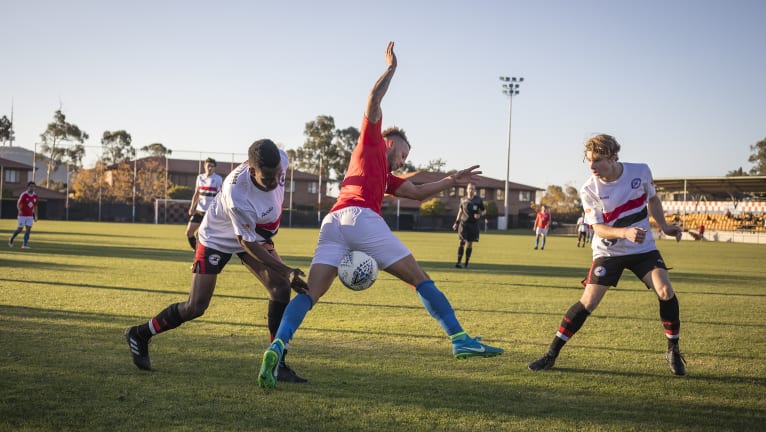 Woden-Weston’s Bul Juach and Canberra’s Thomas James fighting for the ball on Sunday.

The Panthers were denied their first win since the opening day after United striker Aisosa Ihegie completed the remarkable victory a with an 89th-minute goal.

The comeback began when Monaro defender Ed McCarthy was shown a straight red for stopping a certain goal with his hands and Shane Murray made no mistake from the spot.

Ihegie pegged another one back with a sharp finish in the 77th minute and Andrew Slavich levelled the scores with seven minutes left, before Ihegie completed his brace.

Tuggeranong coach Mitch Stevens was initially at a loss for words to describe the win but ultimately it down to their belief in each other.

"It's a hard one to explain because it was a whirlwind final 25 minutes but the the funny thing was at half-time we were down 2-0 but we weren't playing poorly," Stevens said.

"It just felt like we needed to tweak a few things and I rolled the dice with a few changes and got a bit lucky, but it just highlights these guys believe in one another and we know we can score goals.

"We’re approaching the half way point of the season and we're five wins and two losses which is the foundation of a really successful season.

"People had questions about this group but today we showed you can't count us out at any time and we’re going to be right up for it this year."

Monaro coach Zoran Glavinic said their finish was "a joke" but emphasised they'll look to make amends when they face Tuggeranong in the FFA Cup fifth round on Wednesday.

"That was a hard one to swallow, to be 3-0 up then go and capitulate and concede four goals in the 25 minutes… you don't lose from 3-0, you can't lose from there, that’s a joke," Glavinic said.

"It's all about momentum in football nowadays, they saw we were down and kept pushing and creating chances so credit to them.

"The heads were down in the change rooms but I need to lift them for Wednesday, we've got the talent, just finishing the game is the problem.

"Three points today gets us back in the mix and would have made things more positive for us but losing today really hurts the club. We should have been smarter and better."

Canberra were made to work harder than a 4-1 scoreline suggested after their win against Woden-Weston marked an eighth straight in all competitions.

Coach Paul Macor fired a warning shot to the rest of the competition and said his men were just getting warmed up.

"I believe they can get even better, for the majority of the game the boys were in second gear so it will be frightening to see what they can do when they step it up," Macor said.

Meanwhile, Canberra Olympic cruised past the Cooma Tigers 3-1 and the Riverina Rhinos drew 0-0  with Belconnen United.