It was one of their "worst performances" against a resurgent Woden Weston outfit that is certainly "no flash in the pan".

But Tuggeranong still kept its unbeaten record in tact with a 2-0 win over Woden Weston in a top of the table clash in round four of the Canberra premier league at Greenway Oval on Sunday. 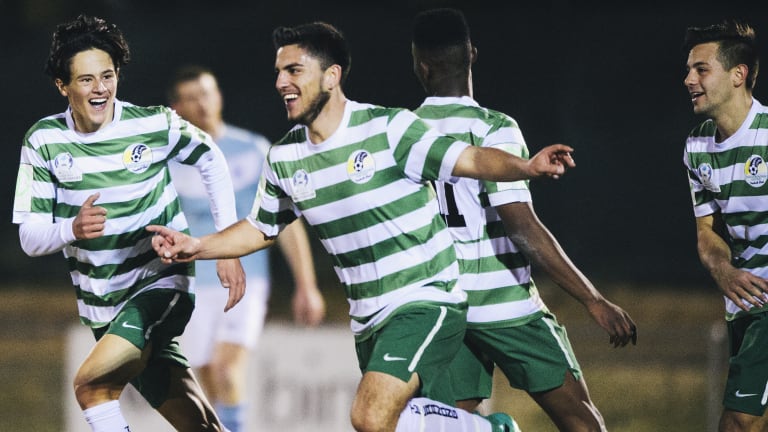 Tuggeranong have continued their winning ways.

Tuggeranong coach Mitch Stevens was rapt with the way his squad bounced back from an FFA Cup qualifiers loss to the same opposition during the week to clinch the win.

What made it more special for the Tuggeranong mentor was the fact they did it for their driving force on the sideline in injured vice-captain Cam Doherty.

"Plenty happens off the pitch to be successful on it. Sometimes it’s a few wins that make people sit up and take notice," Stevens said.

"We worked very hard in the pre-season, we worked hard with the guys on and off the pitch about expectations, about how we treat people, how we do everything.

"When it’s all coming together and you’re winning games then good footballers want to come and be a part of it.

"We drew on the fact that someone like [Doherty], what he gives for us and does for us. We wanted to do something for him, for one of our teammates, that’s what he pulled on and we got the result."

It was one of those good footballers that hammered the final nail into the coffin.

An own goal late in the first half left Woden's hopes teetering precariously before debutant Mate Barisic rubbed salt into the wound with a 66th minute strike.

"It was his first ever appearance for the team. We’re really pleased because he is a very good young player," Stevens said.

"When you start putting some wins together and building a good culture, good young players want to come and play for you so we’re excited to have him and I think he is going to be a massive player for us this year."

Gungahlin United showed signs of life early before they fell victim to a firing Canberra FC, who maintained an undefeated start to their premier league campaign with a 3-1 win at Deakin Stadium.

Ben Obst gave underdogs Gungahlin an early lead when he found the back of the net off the back of an assist from Nicholas Rathjen.

Just 15 minutes went by before James added a second goal to his name when he struck truly from the penalty spot to give his side a 2-1 lead.

Jordan Lamb put the result beyond doubt with an 84th minute goal to secure Canberra's spot in the top four for another week.

Meanwhile, the Monaro Panthers slumped to a 3-0 defeat on their home turf at the hands of the Riverina Rhinos which led coach Zoran Glavinic to slam his senior players in the search for answers.

Canberra Olympic had collected their second win on the trot when they notched up a 3-2 win against Belconnen United in the grand final rematch on Friday night.