Tunisia’s head coach has admitted their goalkeeper faked an injury during two World Cup warm-up matches so that his team-mates could break their fast for Ramadan.

Goalkeeper Mouez Hassen appeared to feign injuries during two friendlies against Portugal and Turkey to coincide with sunset, when the fasting period ends.

And head coach Nabil Maaloul revealed it was a deliberate tactic used so his players could drink some water and eat some snacks while Hassen received treatment. 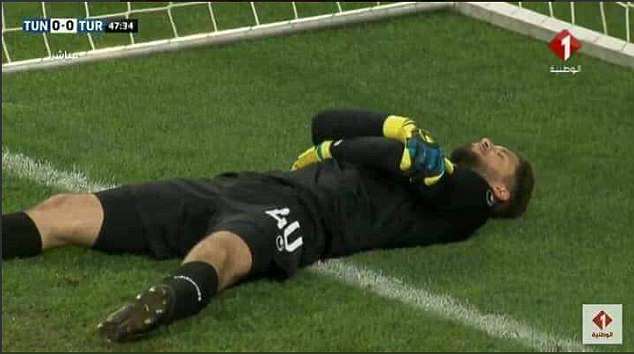 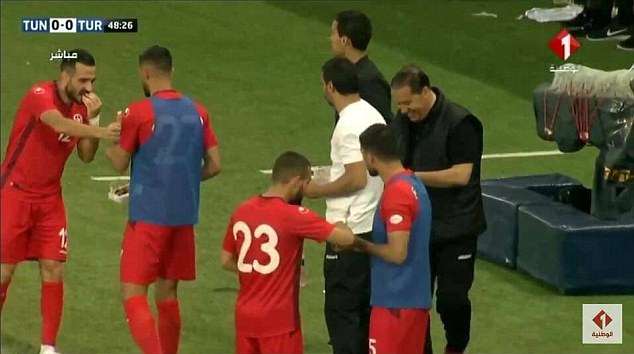 ‘That is indeed my strategy. I prepared it because we have many players who are fasting,’ Maaloul told the BBC.

‘It didn’t go very well in the first game [against Portugal] because Mouez didn’t quite understand when I told him to go down to allow the players, as well as the staff, to break fast.

‘I sent over [midfielder] Yassine Meriah, but he still didn’t get the message. But it was easier for the second match since we informed him in advance.’

Hassen went down early in the second half of Tunisia’s games against Portugal and Turkey coinciding with sunset. 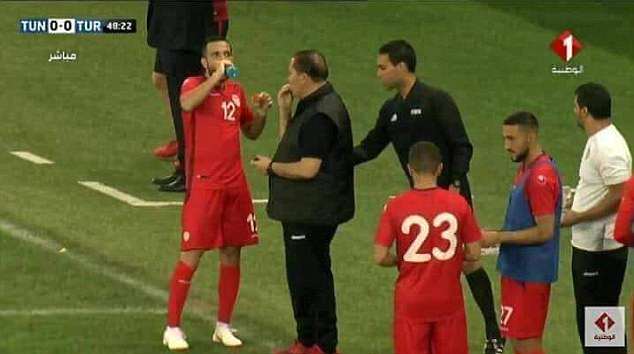 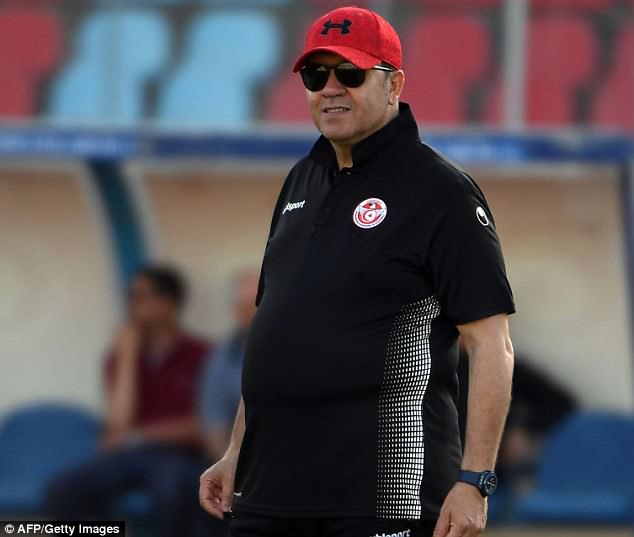 As he lay on the pitch receiving medical treatment his teammates rushed to the sidelines to drink water and snack on dates. In both matches they bounced back to finish 2-2.

Ramadan will be over by the time World Cup warm-ups finish and the tournament begins in earnest.

During their first match against Portugal, Nice keeper Hassen went down in the 58th-minute with an ‘injury’.

Ramadan is the holiest month for the estimated 1.84 billion Muslims around the world, regarded as the month the holy Quran was revealed to the Prophet Muhammad.

This year, Ramadan runs from May 15-16 (depending on the country) until the evening of June 14.

Hundreds of millions of Muslims will be refraining from eating, drinking and smoking from sunrise (Suhoor) until sunset (Iftar).

Observing Ramadan is one of the five pillars of Islam and the fasting is accompanied by spiritual reflection, worship and acts of charity.

While most Muslims are expected to observe Ramadan, exceptions are made for pregnant women, the disabled, the elderly, or if there is a danger to life by keeping the fast.

Children are also exempt from fasting.

Just six minutes later, Tunisia – who are in England’s group at the World Cup – scored and the game finished 2-2.

On Saturday against Turkey, Hassen lay flat on his back after a corner in the 49th-minute, allowing his team-mates to leave the pitch for food and water. He stayed down for around a minute.

Tunisian sports reporters were the first to point out that Hassen’s injuries both coincided with sunset, which is when Iftar – or the breaking of the fast – begins.

Freelance reporter Souhail Khmira tweeted that there is ‘an agreement’ between the players and their goalkeeper to break their fast in this way.

It does not appear that Turkey, another mostly Muslim nation, had any such arrangement in place when they played Tunisia.

Hassen has since been teased on Twitter, including by fellow footballer Chaker Alhadhur, who joked: ‘It’s all right now, we know you were pretending.’

In response, Hassen tweeted ‘I was injured bruv’ alongside laughing emojis.

Hassen was not punished during either game by the on-field officials, and is unlikely to face any subsequent punishment because proving the injury was not genuine is virtually impossible.

The Tunisian football federation has yet to comment on the timing of the two injury breaks.

Hundreds of millions of Muslims around the world are observing Ramadan at the moment. It is a month of self-discipline where Muslims refrain from eating, drinking, smoking and having sex from sunrise to sunset. 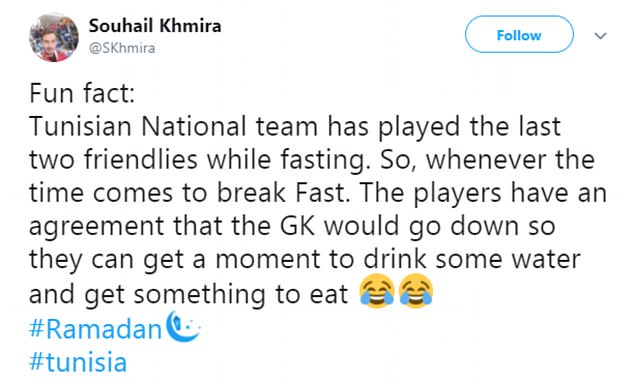 However, some sportsman choose to interpret the rules more loosely. For example, it is understood that in the recent Test series against England, Pakistan’s cricketers did not fast on match days.

Ajmal Masroor, a London-based Imam and member of the Muslim Council of Britain, said in 2011 that the wording of the Quran would allow for someone taking part in a special event to eat during Ramadan and fast at another time.

He told Goal.com: ‘If a footballer was to say to me that “I can’t fulfill my professional obligations if I fast”, I cannot deem this as an acceptable reason. 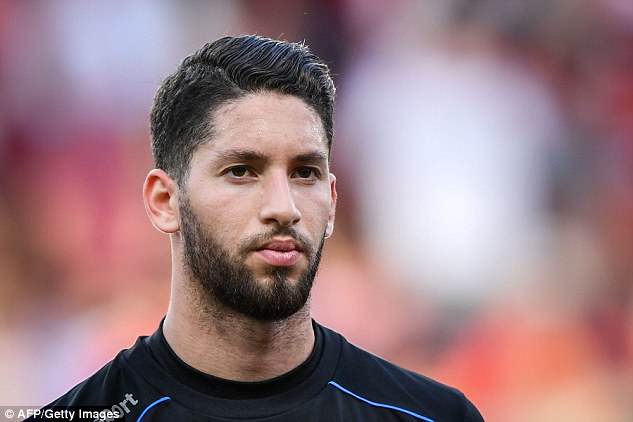 ‘However, you have an event like the Olympics coming up during Ramadan. This is possibly a once in a lifetime opportunity for an athlete.

‘If there is a World Cup during Ramadan then similarly an exception can be made – but it’s a case by case example.’

Nick Worth, who has served on the medical staff of West Brom, Bolton, Fulham, Man City and Sheffield United, has helped guide many footballers through Ramadan.

Ultimately, he said, it will be down to the individual players and their spiritual advisers about how strict they want to be and whether exceptions can be made. 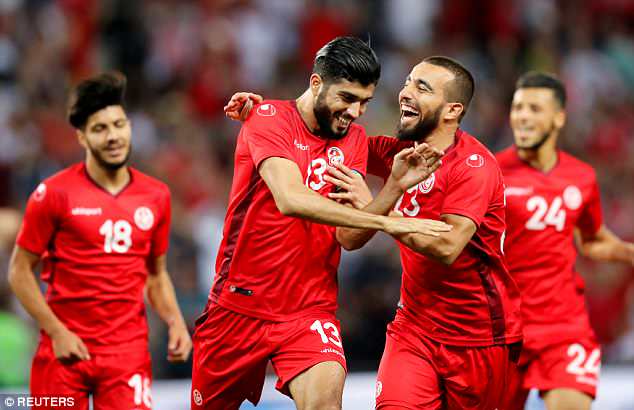 The High Egyptian Islamic Council even issued a fatwa in 2012 allowing its athletes to eat and drink during Ramadan, which fell during the London Olympics.

Fortunately, Tunisia and the other predominantly Muslim countries competing at the World Cup won’t have to worry during the tournament – Ramadan ends on June 14, the day the World Cup kicks-off.

However, Tunisia do have one more friendly to play before Ramadan finishes – on June 9 against Spain – when all eyes will surely be on Hassen.

Tunisia take on England in their opening World Cup match in Volgograd on June 18.