Turkey Kurds: The bitter politics of the football pitch 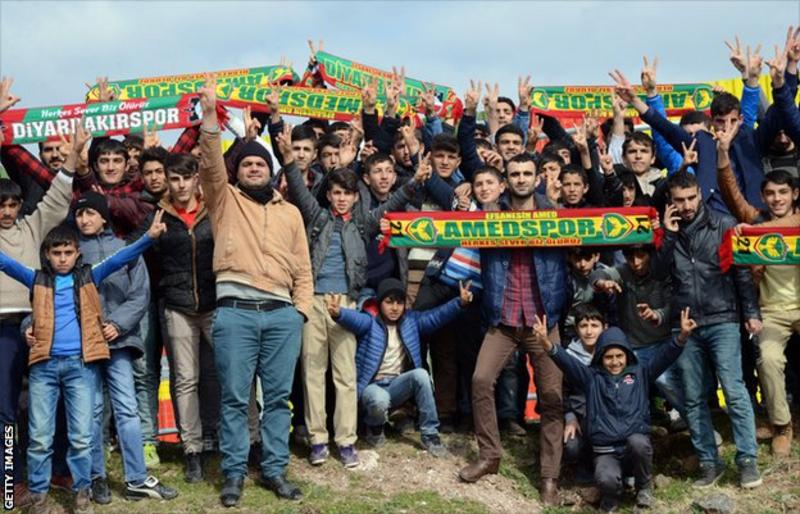 If ethnic tensions in Turkey are reflected on the football pitch, then Amedspor and their Kurdish following are at the very centre of the field.

The club represents the Kurdish-majority city of Diyarbakir in south-eastern Turkey, about 120km (75 miles) from the Syrian border, with a population of about one million.

Mahsum Kazikci, a passionate member of Amedspor’s “Resistance” fan group, reflects the feelings shared by many fellow supporters when he speaks of the “racism” the club faces.

“There is a saying: ‘We will win by resisting’,” he says.

“When Turks say it, there is isn’t any problem, but Amedspor fans can’t even write it on a banner. Despite this we will never change our personality, our way. We will continue on this path. We are a legal fan club of a legal football team.”

The club was founded in 1990 but in 2014 they rebranded – “Amed” comes from the Kurdish name for Diyarbakir and its surrounding region.

This new name is just one of the reasons behind the pressures they have faced in recent years.

They are a long way from the top of Turkish football – they are not even vying for the top places in the country’s third highest division – but their games are often overshadowed by conflict and confrontation between fans.

That is, when their fans are not banned from attending matches.

I visited Diyarbakir on a sunny Spring Sunday when Amedspor had a home game against Sancaktepe, a team from Istanbul.

None of Amedspor’s supporters were allowed in to watch. The reason for the ban stemmed from a mysterious incident in early March.

Mansur Calar, an Amedspor player, was accused of slashing rival players with a razor blade during a home match with Sakaryaspor, a team from Adapazari, on 2 March.

Sakaryaspor said their players had also been attacked as they inspected the pitch and again during the warm-up.

After the game, on social media, players shared photos of their necks showing scarring. Pro-government media outlets called Calar a “terrorist with a razor blade”.

The Turkish Football Federation banned him for life and imposed a fine of 25,000 lira (£3,500; $4,550). The penalty was later reduced to a 20-match suspension, but he still faces a judicial proceeding.

Calar says he is the victim of “a political campaign against Amedspor”.

“It’s nonsense,” he tells BBC Turkish. “How could a football player possibly bring a razor blade and wound his opponent? It’s impossible.

“It was like a derby for us so yes, I was a bit aggressive. But those scars were made by my nails, not a razor blade. I was taking guitar lessons and my nails were a bit long.”

“Things I did not do went viral, out of control on social media,” he says, blaming “fake news” for the bans imposed.

“When we go to an away game, the rival team’s supporters chant racist slogans against us,” he adds.

“This is hard to take psychologically. Amedspor are under immense pressure and we struggle under these conditions.”

It is common to see grey wolves at Amedspor’s away matches – it is a symbol adopted by Turkish nationalists. Giant Turkish flags are also waved and slogans such as “Kurds out, terrorists out” and “This is Turkey, not Kurdistan” are shouted.

In 2016, Amedspor executives were beaten by a mob in the capital Ankara after a game against Ankaragucu.

In 2017, Amedspor’s German-Kurdish player Deniz Naki, who had been previously convicted of supporting the outlawed Kurdistan Workers’ Party (PKK) militant group, was banned for life and accused of “spreading separatist and ideological propaganda” through his social media posts.

Amedspor’s chairman, Ali Karakas, draws a parallel between such reactions and the “polarised political atmosphere” in Turkey.

“Football is at the centre of politics in Turkey,” he says.

“Some circles use it as a means to express their political views, as it appeals to large and young masses. And in today’s Turkey, where politicians use a discriminatory tone, that is reflected on the pitch.”

Turkey has a long history of struggle and violence dating back to the 1980s between the PKK and the Turkish security forces. About 40,000 people have been killed since the PKK took up arms against the Turkish state.

While the current AKP government made efforts towards reconciliation after coming to power, the Kurdish-majority south-eastern region of Turkey enjoyed only a few years of peace, between 2012 and 2015.

Since 2015, Diyarbakir and its wider region have been at the centre of another phase of urban warfare between Kurdish militants and security forces. 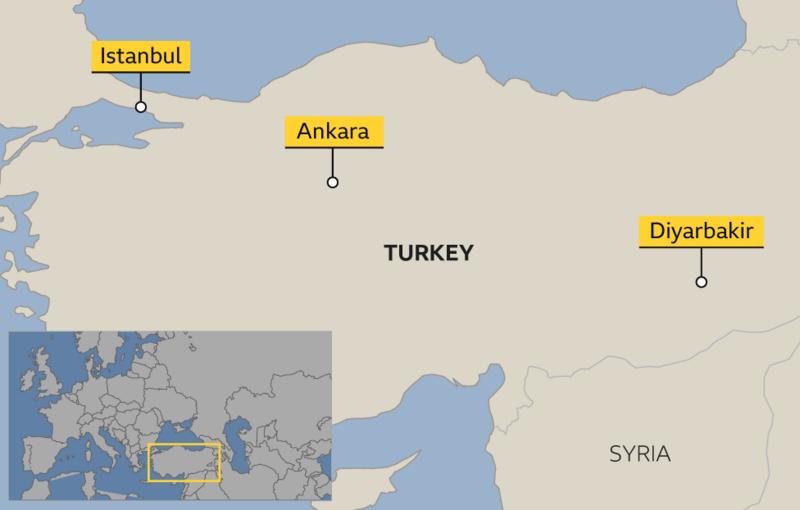 Between July 2015 and December 2016, Turkey imposed curfews and boosted security in the region, amid political turmoil. PKK militants declared self-rule in many areas, digging trenches and building barricades in the streets. Turkish security forces retaliated with military operations.

According to the Office of the United Nations High Commissioner for Human Rights, some 2,000 people were killed in the conflict and more than 355,000 people were internally displaced, escaping the fighting on their doorstep.

In February 2016, as the violence in the region reached its peak, Amedspor players walked on to the pitch holding a giant banner that read “Children Should Not Die, They Should Come to The Match”.

With this slogan, fans and the team were accused of “making terrorist propaganda” and they received a series of penalties. Supporters have been banned from over 60 away games over the past three years. “Security reasons” were given as justification.

Since then, many of their slogans and banners have been deemed “ideological propaganda”.

When I visited fans at the Resistance club, they were painting a banner in support of Mansur Calar ahead of their next home game, against Sancaktepe.

It read: “Mansur Calar is not alone”. They hoped to get it into the stands where they were not allowed.

But come match day, when I stepped inside the deserted stadium, neither banner nor fans were anywhere to be seen.

Supporters later told me delegates of the football federation had prevented them from displaying it.

“We are legal fans of a legal club that play in the Turkish league,” says Mahsum Kazikci.

“We support our team the same way as other team fans do. And we’ll continue to do that.”

“What shall we do?” asks fan club leader Ramazan Tugay. “If it’s a crime to say: ‘Mothers should not cry but watch their kids play football’, what shall we say? We want to shout for peace in football.”

“We are citizens of this country but we also have distinct a language, culture and identity. We are Kurds and we are Amedspor’s Kurdish fans. Nobody should ignore us,” he says.

The region and its Kurdish identity are seen as “the main reasons for the hostile attitude” the club faces, according to Amedspor’s female fan club leader, Beritan Akyol.

She adds: “We are used to the bans and punishments as these lands are deemed as a potentially criminal region.”

This sentiment is also present around the matches of Amedspor’s women’s team, who play in Turkey’s top division. Fans who are not allowed to watch Amedspor’s male team’s home games often rally behind the women’s team instead.

Complaining about the heavy security presence in a match against the region’s other Kurdish-majority team, Hakkarigucu, Amedspor’s female players emerge from the changing rooms and are heard saying: “What is this, are we going to a war or a football ground?”

Only a few days later, on 23 March, Amedspor manage to get permission for their fans to attend an away game in Istanbul, against Eyupspor. It is only the second away match in over three years where Amedspor supporters are allowed into the stands.

There is again a heavy police presence, the security forces are quite intimidating. But with the fans’ eyes on the pitch, and police officers’ eyes on the fans, chants are heard from the Amedspor stands in support of both teams, rallying behind a message of unity.

“Amedspor – Eyupspor! Hand in hand, arm in arm, both teams unite! Peace in the stadium! Hey, pro-government media, do you hear us? Do you see us chanting for peace?” 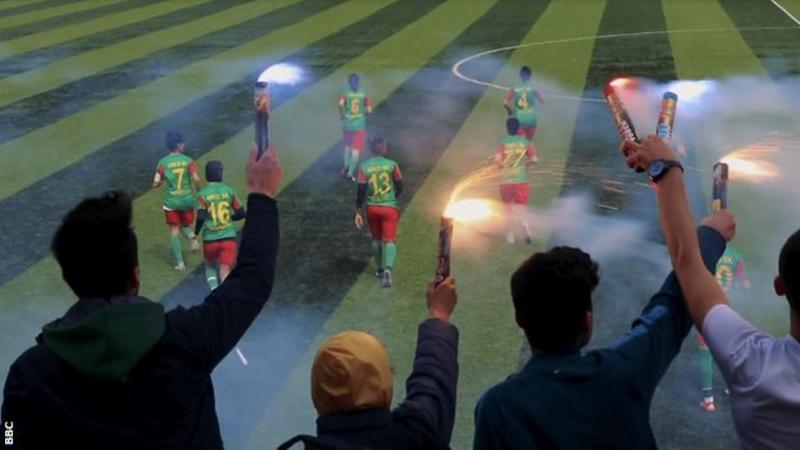 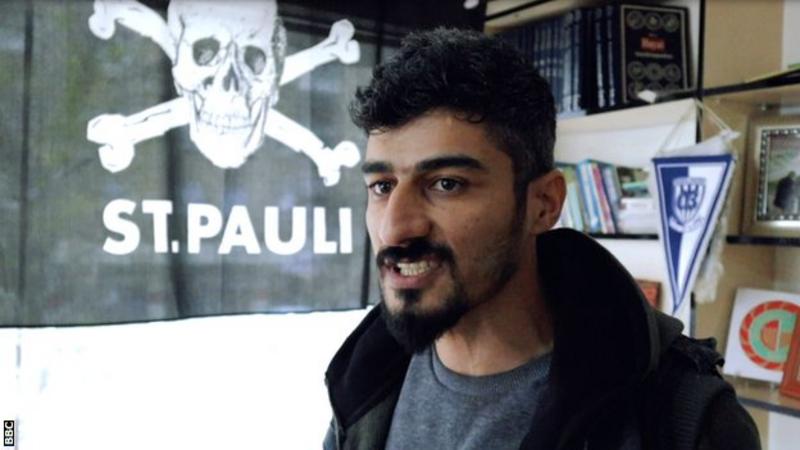 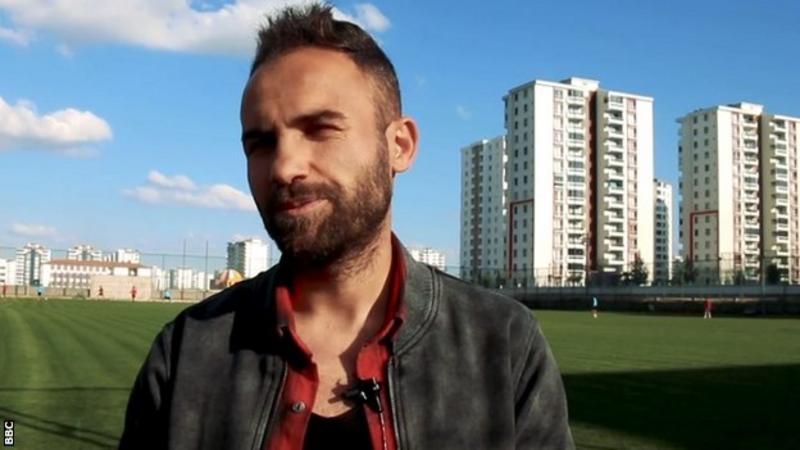 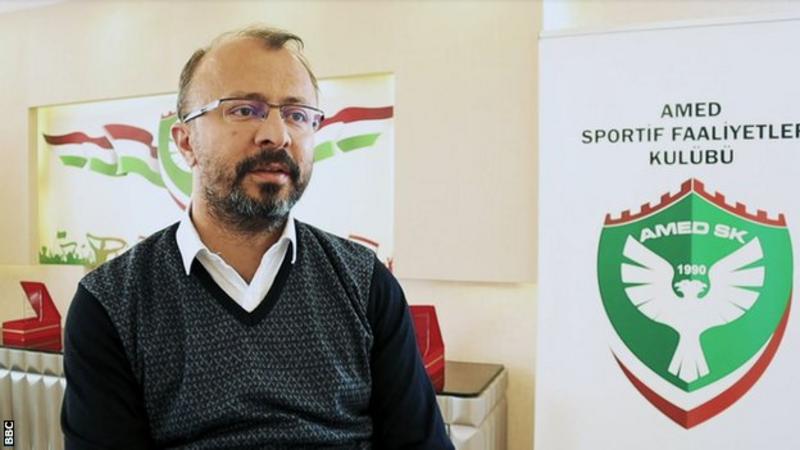