The Kangaroos and Tonga could play a Test on American soil this year, with New York and Utah pitching to host the historic event.

The 2025 World Cup will be staged in the US and officials are keen to take premium rugby league content to the region in the lead up. An international between England and New Zealand will be played in Denver on June 23, with an option for the game to be staged there for following two years. 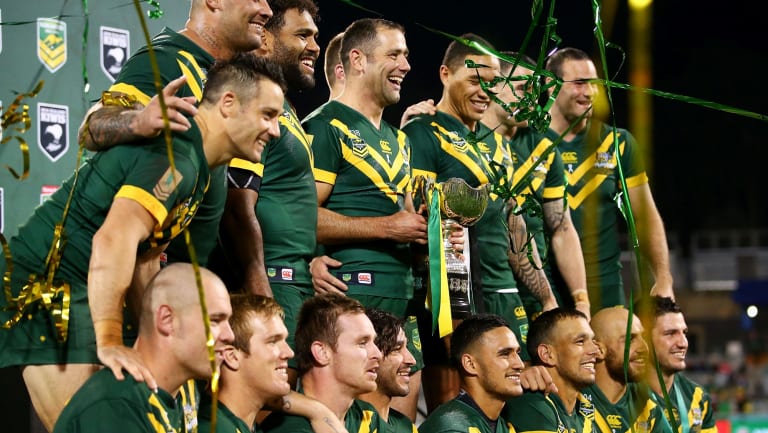 On top of the world: Plans are being hatched for the World Cup-winning Kangaroos to play Tonga in the US this year.

The NRL is also looking to take the opening game of the 2019 season to North America, which would mark the first time a game would be played there for competition points.

Fairfax Media can reveal there are two separate proposals to bring an Australia-Tonga international to the States. One is via the consortium attempting to establish a professional New York franchise seeking to eventually enter a team into the English Super League. The proposal is for the Test to be staged at Red Bull Arena, the home of Major League Soccer team New York Red Bulls. The ground has a capacity of 25,000 and organisers believe a sellout is a distinct possibility.

The consortium, which is trying to replicate the success of Canada’s Toronto Wolfpack, hopes the event will add credibility to their bid for a team in the Big Apple.

The other proposal comes from a consortium of business people wanting to bring the game to Utah. Their plan is for the game to be played at the 20,000-seat Rio Tinto Stadium, the home of MLS team Real Salt Lake. 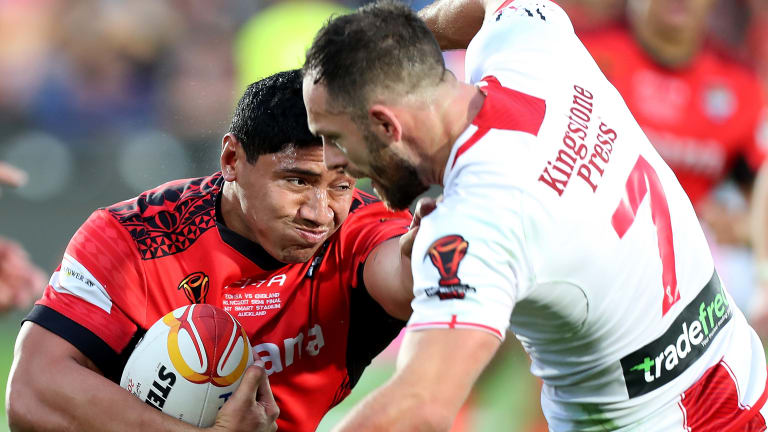 Tonga – one of the success stories of the World Cup after beating New Zealand on their way to the semi-finals – would have plenty of support in Utah. One in four US Tongans lives in the "Beehive State" and organisers believe they won’t have any trouble drumming up interest.

There are alternate plans to take the game to more traditional markets, such as Brisbane’s Suncorp Stadium and Mt Smart Stadium in Auckland. However, secret talks with officials involved in the US proposals have been positive, with their chances likely to improve if the Denver Test is deemed a success.

The Kangaroos are scheduled to play a match against New Zealand at the end of the year, but Australia coach Mal Meninga is keen to add an additional fixture to the calendar. Qatar has been mooted as a potential destination for an Australia-Tonga clash, but the US could present less logistical issues should officials decide to explore a non-traditional market.

Tonga has the potential to become an international powerhouse, but the nation’s development has been hindered by a lack of playing opportunities. Tonga will take on fierce rivals Samoa at Campbelltown in the Pacific Test during the representative weekend, but there are no other fixtures slated. It makes it difficult for the nation – bolstered by the high-profile defections of Jason Taumalolo, Andrew Fifita, Manu Ma’u, David Fusitua and Sio Siua Taukeiaho – to build on the momentum generated during the World Cup.

“The big thing everyone needs to remember is they don’t have a lot to commit to,” Tonga coach Kristian Woolf told Fairfax Media last month.

“We need something for those guys to commit to and that’s meaningful games going forward.

“At the moment it’s very hard for those guys to go out on a limb and make that [eligibility] decision when there’s so much uncertainty going forward.

“The international calendar for the next four years only really involves England, New Zealand and Australia.

“We need to find a way for us to fit in somewhere. We’ve obviously had discussions with Australia and the game everyone would love to see is us playing New Zealand again.

“Unfortunately, that’s not going to happen in 2018.

“We need the people at the NRL and the international rugby league need to want that that happen as well.

“The biggest thing we need going forward is to settle on some meaningful games that help us to continue to be competitive.

“We’re in the top four in the world at the moment and we’d love the ability to push on with that. The only way to do that is playing games.”