Tom Mitchell's hopes of claiming a maiden Brownlow Medal remain intact after he was fined for striking Todd Goldstein in an off-the-ball incident as match review officer Michael Christian laid 12 charges from five games across Saturday and Sunday.

Hawks youngster Ryan Burton has also escaped suspension for his third-quarter collision with North Melbourne's Shaun Higgins on Sunday which left the seasoned Roo concussed and in hospital. Higgins was cleared of any serious injury but required cosmetic lip surgery on Monday. Christian was of the view that Burton's bump was to the body and that he could not have reasonably foreseen a clash of heads.

The news was not as good for Port Adelaide's Lindsay Thomas who has been sent straight to the tribunal for his hip and shoulder on Geelong's Scott Selwood at Adelaide Oval on Saturday night.

Hawk James Sicily is also heading straight for the tribunal after being charged with serious misconduct over an incident in which he is alleged to have stomped on the calf of North's Shaun Atley.

Hawks ball magnet Mitchell was cited by Christian for an off-the-ball incident involving Roos ruckman Goldtsein in the second quarter of Sunday's fiery clash at Etihad Stadium, but has escaped with a $1500 fine.

A free kick down the field was paid against Mitchell, who had begun the round as the $4 Brownlow favourite but had slipped to second favourite by the end of it. 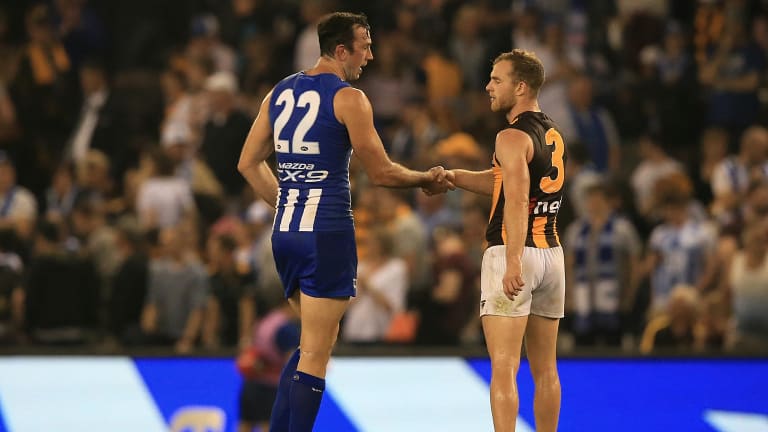 Thomas, in his debut for his new club, had run past the ball when he elected to crash into Selwood, sparking a melee.

Joel Selwood will need to beat the charge to take on Sydney on Saturday.

Thomas has a long rap sheet but new AFL rules mean there are no carry-over points.

Kangaroos youngster Cameron Zurhaar can accept a $2000 sanction  for a shove on David Mirra which led to the Hawk crashing into the fence.

Brownlow medallist Patrick Dangerfield can accept a $2000 fine for rough conduct made to Port's Justin Westhoff.