Australian punter Michael Dickson was selected in the fifth round of the NFL draft on Sunday morning, with the Seattle Seahawks taking him with the 149th pick, before hulking offensive lineman Jordan Mailata was selected by the Philadelphia Eagles shortly after in the seventh round.

Dickson, 21, was given the Ray Guy Award in his final college season at Texas, which is awarded to the best punter in the country – he was later named MVP of the Texas Bowl, in his last game for the Longhorns. 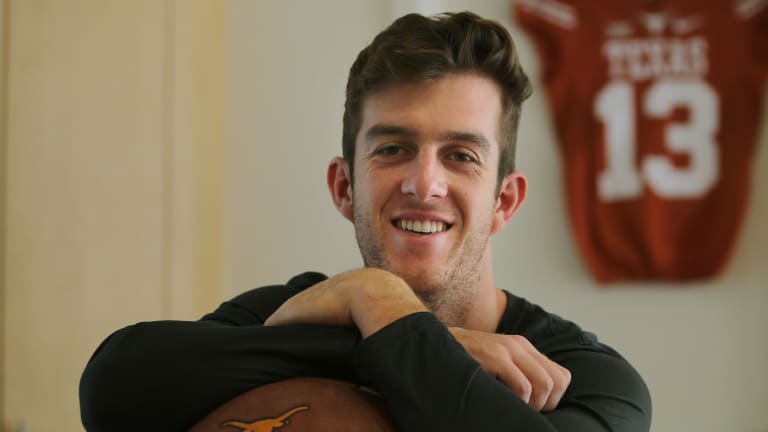 Taking a punt: Michael Dickson was the first kicking player selected in this year’s draft.

He becomes the first Australian drafted by an NFL team since defensive lineman Adam Gotsis was taken in the second round by the Denver Broncos in 2016.

Just a couple of hours later, the giant ex-South Sydney Rabbitohs forward Jordan Mailata was taken in the seventh round by the current Super Bowl champions, the Philadelphia Eagles.

Despite never playing college football, Mailata's huge 203cm, 155kg frame was intriguing enough for the Eagles to use the 233rd pick on. Mailata will play as an offensive lineman for Philadelphia.

"I reckon he’s still the largest bloke I’ve come across in rugby league," wrote then-Rabbitohs coach Michael Maguire for The Players Voice earlier this week, when recalling his first meeting with Mailata back in 2016.

"I remember one game against the Warriors at Redfern Oval. For some reason, they kept kicking off to him. He would run 50 metres every time, carrying a bunch of defenders with him and leaving others scattered around the place."

The Seahawks traded up seven places to take Dickson, handing the 156th and 226th picks to Denver for the right to move up in the draft – the punter is the second Australian drafted by Seattle in the last few years, who also drafted defensive lineman Jesse Williams in 2013.

"Doesn’t feel like real life. So honoured and thankful to be a part of the Seahawks," Dickson tweeted on Sunday morning (AEST).

With NFL teams in a constant battle to stay under the salary cap, incumbent Seahawks punter Jon Ryan, who is the 11th-highest earning player on the team, could be cut to both save money and to make room for Dickson, who was the first kicking player drafted this year.

Dickson spent three years in Texas, after leaving Sydney in 2015. A Swans academy player, his future seemed set to involve the Sherrin before making the switch to American football – a gamble that has definitely paid off today.

With the similarity in skillset to Aussie rules, it's no shock that Australia has continued to churn out punters who have gone on to have success both in the college football scene as well as the NFL – Dickson is one of the latest players to have success linking up with Prokick Australia, a coaching service that helps develop and transition home-grown talent into the American game.

Dickson's Ray Guy Award in 2017 saw the honour won by an Australian for the fifth straight year. Tom Hornsey won it punting for Memphis in 2013, before Tom Hackett for Utah in 2014 and 2015. When Hackett graduated, his replacement at Utah was fellow Aussie Mitch Wishnowsky, who won the award in 2016.

Hackett and Hornsey are currently NFL free agents, who also serve as US-based coaches for Prokick.