Kyler Murray, a first round Major League Baseball draft pick and potential star quarterback, has made up his mind and will pursue a career in the NFL.

The 21-year-old announced on Monday that he was "firmly and fully committing my life and time to becoming an NFL quarterback". 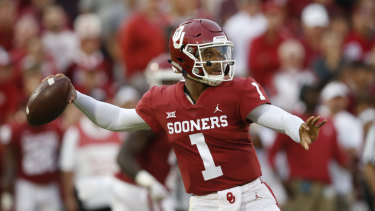 Given his relatively small 180cm frame, success in professional football is not guaranteed, but Murray said he will ready himself for the NFL draft rather than fulfilling the minor-league contract he signed last summer with the Oakland A's.

"Moving forward, I am firmly and fully committing my life and time to becoming an NFL quarterback," Murray announced on Twitter.

"Football has been my love and passion my entire life. I was raised to play QB and I very much look forward to dedicating 100 per cent of myself to being the best QB possible and winning NFL championships.

"I have started an extensive training program to further prepare myself for upcoming NFL workouts and interviews. I eagerly await the opportunity to continue to prove to NFL decision makers that I am the franchise QB in this draft."

Oklahoma's Heisman Trophy winner last season, Murray was the ninth overall selection by the A's in the 2018 MLB draft last June and received a $US4.66 million ($A6.6 million) signing bonus, which will be voided if he confirms his pursuit of the NFL.

Although the A's were hoping he'd choose baseball, they were increasingly pessimistic the longer his locker in their spring-training clubhouse remained empty.

"Things have certainly changed since the draft," Billy Beane, Oakland's executive vice president of baseball operations, said. "The situation is fluid right now [based] on a historic college football season that the young man had."

Although NFL talent evaluators gravitate toward taller quarterbacks, the success of diminutive stars like Russell Wilson and Baker Mayfield have caused some NFL scouts to reconsider that preference.

Murray is now preparing for the NFL combine, which begins on February 26, rather than spring training.

"Quarterback is a very demanding position, as is being a Major League baseball player," Beane said.

"To say somebody could or couldn't, I'm not here to say that. Something like that is something that is part of our private discussions."

Murray's accountants will be busy sort out the situation now that he has announced his decision.

He was to receive $US1.5 million within 30 days of the approval of the contract by Major League Baseball and $US3.16 million on March 1. 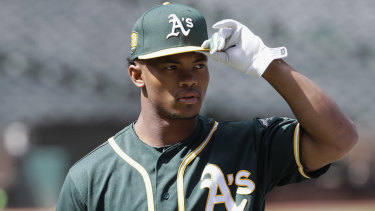 Murray had been drafted by Oakland in the first round last year.Credit:AP

His NFL draft status remains unclear, but he appears a safe bet to get drafted in the first round. Mayfield, the No.1 overall pick last April, can expect to earn just under $US33 million over his rookie contract with the Cleveland Browns, including a signing bonus of more than $US22 million.

Murray will likely receive eight figures of guaranteed money if he is taken anywhere in the first round, so following his heart also makes financial sense.