Ryan Hollins wanted to share a message for his U.C.L.A. Bruins on the eve of their Final Four matchup against Gonzaga.

“Because of what we did and the success that we had, Mark Few is going to try and put those boys in the dirt,” Hollins said. “They better have their hard hats ready, because they’ve inherited a rivalry that they don’t even know they’re stepping into, to be honest.”

Hollins played center on the U.C.L.A. team that engineered one of the most remarkable N.C.A.A. men’s tournament comebacks in the last generation. In 2006, U.C.L.A. frantically and improbably erased a 17-point deficit against Gonzaga in the regional semifinals, a rally that ended Adam Morrison’s storied college career.

In the aftermath of the game, Darren Collison, then a U.C.L.A. guard, said he had no words to describe what had happened. That sentiment rings true 15 years later. “I’m still speechless to this day,” Collison said Thursday. “That whole entire game, things weren’t going well for us for up until the last five or so minutes.”

Few coached Gonzaga then and now. Hollins played under Few at the Pan American Games in 2015. “He was still very aware, very aware of what had happened in that comeback and that they shouldn’t have let it happen,” Hollins said.

That U.C.L.A. team relied on mental toughness and adhering to the principles of Ben Howland, the head coach. The second-seeded Bruins planned to trap Morrison and run Derek Raivio off the 3-point line. But they found a team just as resilient in Gonzaga, seeded third.

Morrison started like the all-American he was and wore out Arron Afflalo, U.C.L.A.’s primary wing defender. “Adam Morrison was going to the line, talking trash, saying splash,” Hollins said. Morrison and Afflalo got into it at one point. “Arron throws him to the floor, and we always joke, Arron goes full Compton right there.” 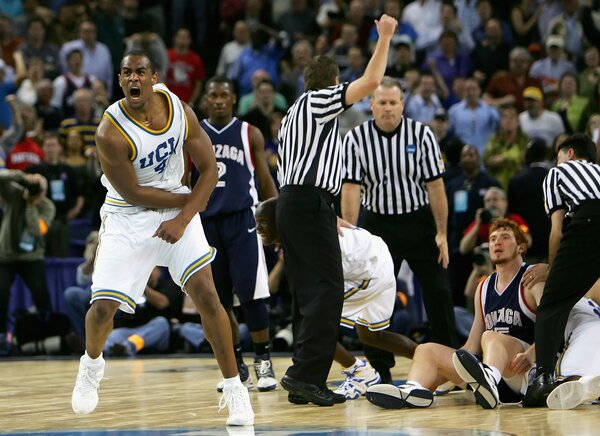 “I felt like I had been there before,” Bozeman said. “I was a fifth-year senior at the time. I think I had seen everything, to be quite honest. My whole thing wasn’t about Adam Morrison. It was just pretty much about doing my job and using my length.”

Later, people told Hollins that they turned off their television at about that time. The Bruins, though, were just warming up.

“It got to the point where it wasn’t even in Ben Howland’s hands,” Hollins said. “It was about us.”

U.C.L.A. made inroads early in the second half and trailed by 9 points with about three minutes remaining.

“In the moment, you are never giving up, and you focus on keep fighting to the end and staying together, going through the process that it takes to pull something like that off,” said Jordan Farmar, a starting guard.

Gonzaga center J.P. Batista’s foul sent Hollins to the free-throw line with 19.7 seconds left and the Bruins down by 3. Hollins, shooting about 60 percent from the line for the season, converted both of his one-and-one free throws to bring U.C.L.A. within a point.

“I was blacked out,” Hollins said. “For some odd reason, normally you stare at the rim. I remember staring at the entire backboard.”

Farmar stole the ball from Batista as Gonzaga tried to get possession over the half-court line and quickly delivered a crisp pass to Mbah a Moute for the go-ahead bucket.

Mbah a Moute clinched the win by diving and knocking the ball away as Gonzaga’s Raivio hurriedly tried to answer.

“The only way that a guy 6-foot-8 steals the ball from a guy 6 feet tall without fouling him is to literally run and slide on the floor like he’s a rock band musician coming in onstage,” Hollins said. “He runs full speed and slides and grabs the ball. It’s insane.”

Once the buzzer sounded, Hollins went to Morrison, who had shot 10 for 17 but missed his final four shots.

“Because he was crying, I wanted him to know how amazing he was and to never drop his head because he had a huge future ahead of him,” Hollins said.

Hollins and Bozeman then held their hands up. Hollins noticed the eerie quiet inside the Oakland Arena.

U.C.L.A. fell to Florida in the championship game. The visit was the first of three consecutive Final Four appearances and a renaissance of the storied program, which has won 11 N.C.A.A. championships over all.

“Just to remember yourself as a child, watching March Madness and seeing all those legendary moments and wanting to be a part of it,” Farmar said, “and then actually having that opportunity and then 15 years past that moment, people are still talking about how that was the best game they’ve ever witnessed or whatever everybody’s own personal anecdotal evidence or experience, it’s pretty special.”

Hollins directly traces his professional success to the Gonzaga game.

“I’m definitely not who I am today, literally, without that game,” he said. “That game meant so much more because losing in the Sweet 16 versus making it to that next weekend, that’s everything. You only get defined in college basketball by winning in March Madness, sadly so. You can be a memorable team, but making that second weekend, that is everything. I’d probably go undrafted.”

The schools have never met this deep into the tournament. This Final Four matchup presents a different kind of matchup for the West Coast’s premier men’s basketball programs.

Gonzaga, undefeated and the tournament’s top overall seed, is chasing perfection. The Bulldogs breezed to the Final Four, crushing U.S.C. in the Elite Eight. Their closest result was a 16-point win over Oklahoma in the second round of the tournament.

U.C.L.A. trailed Michigan State late in a First Four matchup before beating B.Y.U., Abilene Christian, Alabama and squeezing past Michigan to qualify for the Final Four.

Labeling U.C.L.A. as an underdog may be an understatement. Gonzaga is a 14-point favorite, the largest Final Four spread since 1985 when the tournament expanded to 64 teams.

“Hopefully history can repeat itself.”