CHARLESTON, S.C. — For those who hate seeing good things happen to Duke, this United States Women’s Open is not for you, as the former Blue Devils teammates and champions Yu Liu of China and Celine Boutier of France are tied for the lead after three rounds.

Yu rallied from four shots behind when the round began with a five-under-par 66 on Saturday to reach seven-under 206 over all. Boutier, her good friend and fellow starter on the 2014 N.C.A.A. championship squad, shot a 69.

“I don’t know about other people, but when I see Duke players playing well, I kind of want to play well, too,” Boutier said.

There has been plenty of that recently. Duke won another N.C.A.A. title last week, and this week at the Country Club of Charleston, the sophomore Gina Kim, an amateur, has been near the top of the leaderboard much of the tournament. Yu and Boutier kept that going to set up a showdown for a major title.

“It’s a major championship,” said Yu, 23. “Everybody is out there trying to win, and we’ll be very focused.”

Yu remembers the 25-year-old Boutier driving her to dinners and generally looking after her younger teammate. They kept their friendship after going professional, spending time at Symetra Tour and L.P.G.A. events.

Yu and Boutier were a stroke in front of Lexi Thompson, Jaye Marie Green and Mamiko Higa of Japan, the surprise leader the first two rounds.

Boutier held the lead at eight under until she made her only bogey of the round, on No. 16, after stubbing a chip and needing a 21-footer to limit the damage. She won the Vic Open in February in Australia for her first L.P.G.A. Tour title. 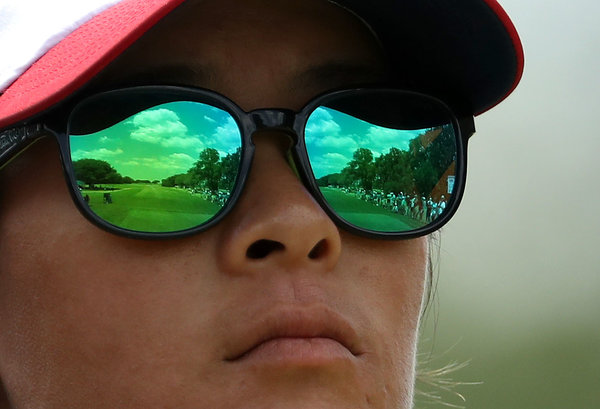 Yu, in her first U.S. Women’s Open, made six birdies in a 13-hole stretch to move up after starting four shots off the lead. She has not won on the tour.

Thompson powered her way into contention, going eagle-birdie on the 15th and 16th holes for a 68. Green shot 68, her second sub-70 showing this week after entering with just one round in the 60s in five Open appearances.

Higa had an up-and-down round of three birdies and three bogeys to lose the lead she had held much of the week. She finished with her second straight 71.

Boutier had a 25-foot birdie attempt on the final hole, but her putt went a foot or so past and she finished with par to close a long day.

She was among 45 players who could not finish the second round on Friday because of a weather delay and had to return before sunrise to complete four holes.

But Boutier stayed patient — and pounced when her opportunities came. She had a 10-foot birdie on the ninth to tie Higa, then moved ahead with a 12-footer for another birdie on the 13th.

The 23-year-old Yu had few expectations playing her first U.S. Women’s Open and fell five shots off the lead with a bogey on No. 3. But she had six birdies the rest of the way and will play the final group with one of her best friends on tour.

“We probably won’t talk much,” Yu said with a laugh.

Thompson, who tied for fifth in this event last year, looked as if she was fading with consecutive bogeys on the 10th and 11th holes to fall five shots behind. She rallied by reaching the par-5 15th in two and making a 30-foot putt for eagle. Her approach on the next hole landed 5 feet away, leading to a birdie that left her a stroke behind.

Higa was the tournament’s stunning story line early after shooting a 65 on Thursday — the lowest debut ever in the U.S. Women’s Open — then notching three birdies in six holes after a two-hour storm delay to keep her lead.

But bogeys on the seventh, 10th and 12th holes knocked her back. Higa recovered with a birdie on the 14th and parred home to stay in contention.