I used to have this recurring dream when I was a kid. It’d always start on a Tuesday, with me named in the St George Dragons’ first-grade squad. The forthcoming match would always be against South Sydney, to be played at Kogarah’s Jubilee Oval the next Saturday afternoon. But all week prior to game day, it’d always properly chuck it down; Jubilee would end up better resembling the Sea of Galilee. Thus, the venue would always be changed at the last minute; the game would be played on the floor of my lounge room. Nowhere else suitable was available, on such short notice.

The players from both sides and the presiding referee (Mick Stone would officiate, every time) would get changed in the bathroom. The laws of the game would by necessity be ‘‘adapted’’ – everyone had to scurry on their knees instead of run; the ball would be supplanted by a pair of rolled-up socks. St George always won, never by less than 30 points. The only injuries were carpet burns. 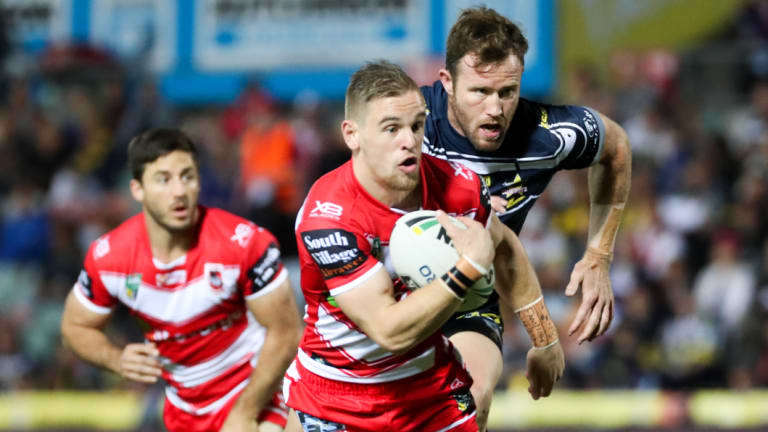 Valuable: Replacing Matt Dufty with Jarryd Hayne was just the tip of the iceberg of crazy ideas this week.Credit:AAP

You get my drift – dreams are almost always trippy, ridiculous gibberish. Sometimes, though, not so much as actual, real life. Take this week’s mutterings, that St George Illawarra might spear fullback Matt Dufty in a complot to jag the signature of one Jarryd Hayne.

I don’t care if it’s always been Jarryd’s real dream to wear the Red V; I don’t care if he’ll play for minimum wage (not that the NRL would ever acquiesce to that); and I couldn’t give a rodent’s hind quarter if Hayne might serve as mentor to some impressionable Dragons players. The Dragons replacing breakout star fullback and local junior Dufty with Hayne would be a very bad idea with no identifiable upside, which ain’t all that well thought out.

St George Illawarra’s interest in Hayne was not, however, the most insane proposition I encountered this week. Sitting squarely on that mantle is the notion that it’s a reasonable concept for the NRL to introduce rules severely constricting the right of professional coaches to enter into contracts regarding – or even negotiate the terms of – new employment arrangements. So it’s supposedly mooted, the NRL is considering a system where coaches would be suspended; clubs whacked with monetary fines. Apparently, the NRL and its clubs are contemplating a contracting system that would prevent coaches from signing new deals or even entering into pre-contract discussions until they’ve less than a year to run on their current agreements.

As best I can decipher the rationale, the rules would be designed to avert situations such as Wayne Bennett’s, where he’ll coach the Broncos in 2019 although he’s already signed to coach the Rabbitohs the year after. The justification for the proposed rules seems to be that if similarly strict rules are accepted as a means of controlling the movement of players, why shouldn’t coaches be accepting of the same regime. Indeed, one unnamed club CEO was quoted in the media this week musing that the penalties imposed on coaches having the temerity to negotiate with prospective alternate employers more than 12 months before his (or her) current role ends, should be ‘‘unbelievably substantial’’.

Apparently, it’s hoped ‘‘whistleblowers’’ would dob in coaches signing deals in defiance of the rules. With the utmost of respect to the said unnamed CEO, I can’t actually remember the last time I’ve read something so shortsighted and idiotic, championing the restraining of the trade and rights of coaches for no good reason.

The player draft in Australian rugby league was declared illegal by the courts back in 1991. Rugby league has imposed a salary cap since 1990 without its players really challenging it. A salary cap is a restraint on players’ trade but quite possibly not an unreasonable one considering the twin justifications of ensuring the financial viability of individual NRL clubs (making sure they don’t send themselves broke) and therefore the economic position of the league as a whole; and ensuring a far and wide scattering of playing talent between the 16 teams, thus manufacturing unpredictability in outcomes and sustained interest.

But the same logic can’t be applied to justify impinging on the otherwise free rights of professional coaches, to do the best for themselves in a highly volatile environment. Football coaching is a remarkably speculative and unpredictable profession even in calm times; one would be best advised to not take out even a five-year mortgage based on a forecasted future coaching income.

Coaches are sacked with relative ease, and any number will inevitably learn that precise fate in 2019. There’s only ever 16 spaces in this game of musical chairs at any one time, and there’s no real economic argument that can justify attempting to prevent or materially curtail the normal contractual rights of coaches and coaching staff enjoyed by employees in other professions.

Yes, the optics of a coach signing up to coach a rival team in two years’ time aren’t the prettiest. Yes, it’s bound to be turbulent and cause disruption, for Bennett to coach Brisbane next year when he’s heading to Souths thereafter, and Anthony Seibold vice versa. Yes, the presence of a departing coach might be akin to having termites chewing away at your house.

However, if those are the problems, rugby league clubs need to deal with the issue as would Macquarie Bank or PWC. You don’t see those organisations petitioning for the introduction of a closed contracting ecosystem, which serves to stomp on the rights of individuals. If ever there was a time for the coaches to form a union (as has been mooted), then that time is now.

In the absence of consent given by the coaches upon whom such draconian regulations might seriously impact, it’d be a brave move for the NRL to attempt to legislate to control their otherwise free movement. Doing so would constitute a restraint of trade that’s probably unreasonable, and anti-competitive conduct that might be illegal.