Usain Bolt has been tabled an official contract by the Central Coast Mariners but the man who would be his coach, Mike Mulvey, says he knows nothing about it, suggesting there is no room for the Jamaican sprint star in his A-League attack.

The Mariners made the offer to Bolt's management over the weekend, with the news breaking while the Mariners were playing their season opener against Brisbane Roar on Sunday. 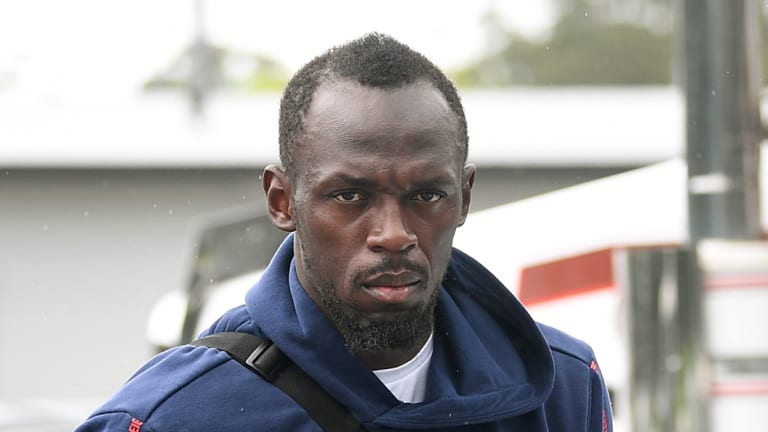 Confirmed: A contract offer has been made to Usain Bolt by the Mariners. Credit:AAP

Sources suggest the deal is worth $150,000 – a long way short of the $3 million that had previously discussed with Bolt’s management. And while it would allow him to conceivably begin playing A-League football immediately, Mulvey’s reaction would suggest not everyone at the Mariners is on the same page when it comes to the eight-time Olympic champion.

Bolt was reportedly in Melbourne considering his options. His long-time agent Ricky Simms confirmed to Fairfax Media that Bolt had received a contract offer but did not provide any further detail.

"In response to the media stories, yes, Usain has been offered a contract. I do not want to make any further comment at this stage," Simms told Fairfax Media.

The Mariners declined to comment while Tony Rallis – the Australian intermediary who helped orchestrate Bolt's indefinite trial – also went to ground, saying he was not permitted to speak about the matter.

It's understood Football Federation Australia has not provided any financial contribution and was unaware of the club's pitch to Bolt.

Mulvey was pressed on Bolt's status in his post-match press conference after Central Coast's 1-1 draw with Brisbane and said it was all news to him.

"That's for a few pay grades above my level," Mulvey said.

"I do appreciate how important this story is for the rest of the world. But you have a look at our frontline today and you wonder if he could get into any of those positions, wouldn't you? I don't know anything about what you're talking about and that's god's honest truth."

Bolt, 32, has made modest improvements since linking up with the Gosford-based club but has not looked up to professional standard on the basis of his two pre-season friendly appearances.

Neither one was against an A-League opponent and while Bolt scored two goals in the second match, against a makeshift team of NPL players from Sydney's south-west, he still looked a long way from the grade in his general play, movement and awareness.

His sheer marketability was always going to make the prospect of a full-time deal tempting for the Mariners, especially considering they are the smallest club in the A-League.

The Mariners took the lead against the Roar in just the fourth minute at Suncorp Stadium, and against the run of play. Brisbane had gone close to opening the scores themselves, but as soon as their move crumbled, they were caught out by a rapid counter-attack from the visitors.

Connor Pain finished it off, and was unlucky not to have added a second goal in the 30th minute when his long-range shot smacked the inside of the right post.

The Roar otherwise dominated the first half but went into the sheds without registering a shot on target, with high-profile recruit Adam Taggart the prime culprit up front.

Taggart missed twice from close range, first toe-poking wide from a cross before then spraying his shot high and wide despite being all alone in front of goal.

The former Perth Glory striker eventually found the net in the 65th minute, drawing the Roar level – but not before he had butchered two more clear first-half chances and had a penalty shout chalked off by the VAR for offside.