Usman Qadir has his legendary father’s blessing despite turning his back on Pakistan in the hope of playing for Australia.

Qadir, 25, the son of Pakistani leg-spinning great Abdul Qadir, burst onto the Australian domestic scene on Wednesday, taking 3-50 on debut for Western Australia as the Warriors crushed Victoria by six wickets in their JLT Cup match at Junction Oval. 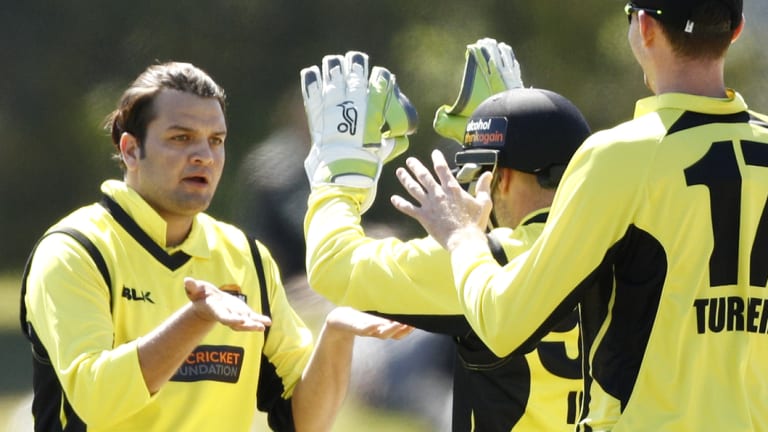 Usman Qadir with teammates after snaring a wicket against Victoria.

A leggie like his dad, Qadir jnr used his wrong-un to good effect, and got plenty of flight and bounce.

He played first-class cricket in Pakistan, where his record was modest, but moved to Australia in 2016 and last summer played grade cricket in Sydney.

Qadir had previously harboured ambitions to follow his father and play for Pakistan, but became disillusioned with the running of the sport in the country, which he says was infested with politics.

He has already signed as a replacement player with the Big Bash League’s Perth Scorchers, and is eyeing a move to WA to play grade cricket, and potentially in the Sheffield Shield.

Longer-term though he is hopeful of following in the footsteps of Fawad Ahmed by obtaining Australian citizenship, with selection in the Australian squad for the 2020 World Twenty20 on home soil is goal. 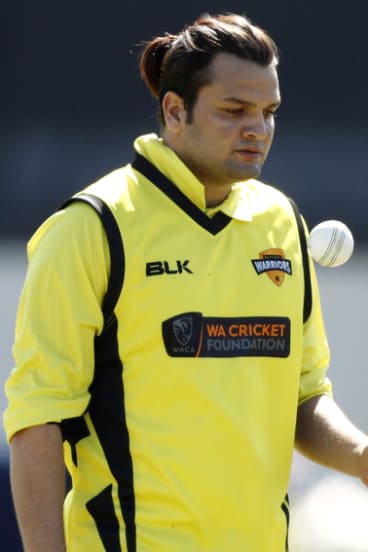 “No more Pakistan. I want to play for Australia definitely, 100 per cent. Because I did not get any chances in Pakistan,” Qadir said after WA’s win on Wednesday.

“There is politics. I did not get any chances [in Pakistan].

“Hopefully I will perform well in Australia and grab the chance to play.

“Hopefully I will get citizenship in two years’ time. My goal is to play for Australia at the 2020 World T20.”

Abdul Qadir took 236 Test wickets for Pakistan and is widely considered to be one of history’s greatest leg-spinners. He also served as Pakistan’s chief selector last decade, and spent a season playing district cricket with Carlton 20 years ago, where he unsurprisingly dominated.

Usman Qadir said his dad had backed his decision.

“He said ‘feel free to do whatever you want to do. You are grown up and can make your own decisions, and I’m with you, I’ll support you',” Usman Qadir said.

The Warriors moved five points clear atop the JLT Cup standings after claiming the bonus point on Wednesday.

Victoria won the toss and elected to bat on a good batting deck but lost regular wickets, failing to build momentum.

Peter Handscomb top-scored with 57, while Glenn Maxwell – again batting at No. 5 – failed to take advantage of what could have been a lengthy stay at the crease, gone for a quick-fire 25, caught at deep fine leg by Qadir off the bowling of Andrew Tye, who was named man of the match for his 3-47.

That WA would win never looked in any doubt after openers Josh Philippe (65) and Josh Inglis (42) got the Warriors off to a quick start.

Former Victorian Marcus Stoinis finished things off in a hurry by smashing 47 not out from 26 balls.