At worst, Bert van Marwijk may only have 72 meaningful hours in charge of the Socceroos.
At best, he could have a few more weeks.

Australia's final World Cup group-stage game against Peru in Sochi in the early hours of Wednesay morning, as well as the match being played simultaneously by France and Denmark, will define not just the Socceroos' fate at Russia 2018 but van Marwijk's tenure with the team. 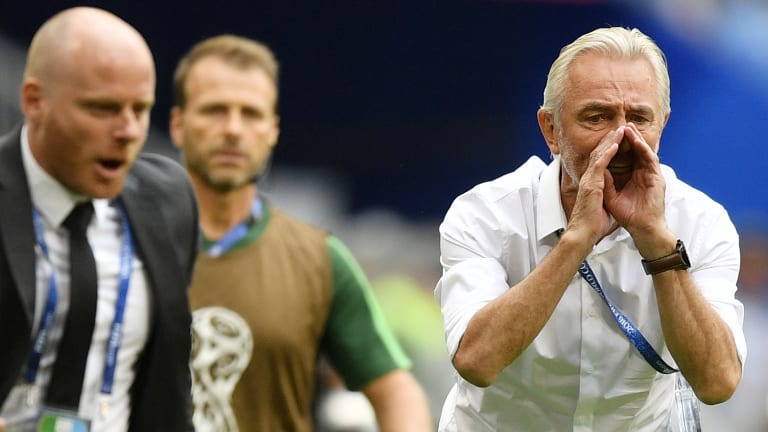 Now hear this: Bert van Marwijk is direct and uncompromising.

Beat Peru (with France beating Denmark in a low-scoring encounter) and he will be hailed a hero as Australia would then almost certainly progress on goal difference to the knockout phase.

Van Marwijk would then have equalled the effort 12 years ago of his iconic predecessor, Guus Hiddink, who led the golden generation of Socceroos stars to the round of 16, where they only succumbed to eventual winners Italy from a last-minute Francesco Totti penalty.

A win against Peru but failure to qualify would mean he has matched the feat of another Dutch coach in Pim Verbeek, who led a fractious Socceroos squad in South Africa 2010. That team recorded one win (over Serbia), an unlucky draw (with Ghana) and a heavy loss (to Germany) in their three games, failing to get out of the group stage despite securing four points. 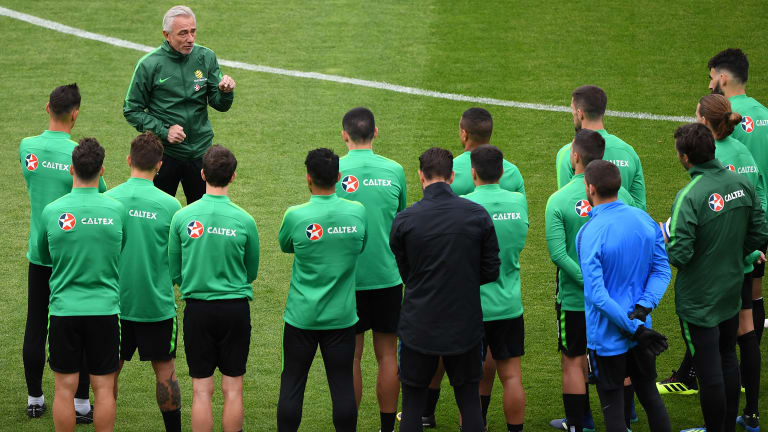 One team: Bert van Marwijk’s bond with the Australian players is growing, and the Socceroos have adapted to his tactics with gusto.

Whatever happens, van Marwijk's class of 2018 have already outperformed the Ange Postecoglou-led team of 2014, who lost all three games (3-1 to Chile, 3-2 to The Netherlands and 3-0 to Spain). They might have won plenty of plaudits for their first two performances but the reality was a tournament record that read no points, three goals scored and nine conceded.

But it would be too simplistic to judge van Marwijk's contribution to Australian football solely by the results achieved in this World Cup alone.

Yes, his tenure has been short and his time to work on players limited, but from a tactical viewpoint he has achieved an awful lot in a short time.

The ageing Dutchman (he is 65 but is still lean and trim and his greying locks are swept back while his chin sports a fashionable five-day stubble most of the time) has earned a reputation for tetchiness, certainly with the media.

His face clouds over and he looks daggers at persistent questioning about his line-up and his tactical plans. His brow furrows and his face sets in a stoic mask as he emphasises how he will not speak about his game plans or selection no matter how much the Australian media and public at home want to know.

On a handful of occasions he has threatened to end press conferences and briefings and simply walk out if the inquiries persisted.

Dutch journalists covering the Socceroos (and there are a handful because The Netherlands has failed to qualify for this World Cup and van Marwijk is the highest-profile Dutch representative in Russia) say that this is nothing new.

''He is a tremendous coach tactically and is always close to his players but he never likes to talk with the media if he can avoid it,'' said one.

''He does not talk about team selection because he wants to keep the unity of the group. He always wants players to be sharp and not to know, for them all to think they might have a chance of playing. He wants them to work and stay together, not to break into little groups.''

That is his public face. Behind the scenes he has clearly developed an affinity with a group of players whom, he says, have surprised him with their capacity to absorb his tactical information and execute it almost to perfection.

The mask of grumpiness dropped slightly in a briefing leading up to the match with Denmark when he admitted that the attachment he now had to his players was growing.

"When you work every day you're getting closer so we all were very disappointed about the result [against France]  … everybody saw I think maybe a completely different Australia. That makes us proud, everybody, especially for me, the players are most important, not so myself.

"I don't know if I am surprised [at their improvement]. I hoped but I didn't know that before. The only thing I know is the way I wanted to work and I hoped that they will improve. But they really improved.'' 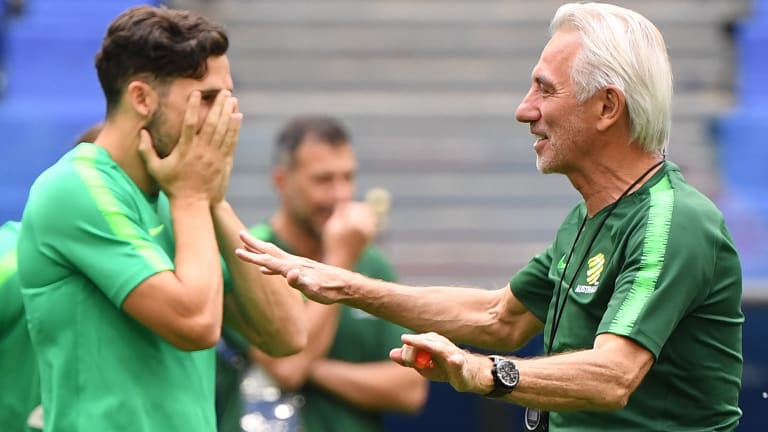 Anyone who was in Oslo at the end of March for van Marwijk's first game in charge would hardly have thought it was the same team in action against France and the Danes.

In Norway, where they lost 4-1, they were awful. Van Marwijk and his coaching team had only had a few days with the squad and precious little time to inculcate his philosophy.

But even he must have been surprised at how often they capitulated against the rather basic Norwegians. Afterwards, he complained that the players had taken his instructions too literally and had failed to think instinctively enough for themselves when the occasion demanded.

Five days later they were better in a rather lucky goalless draw with Colombia in London (their opponents had a goal disallowed and struck the woodwork as well as missing a penalty) but the team showed that they had already absorbed some of the van Marwijk message.

The change he has wrought since then thanks to a lengthy training camp in Turkey and two friendly matches against non-World Cup qualifiers has been phenomenal.

His tactics are not complicated and he doesn't change things. He sticks with a basic 4-2-3-1 with a hard-working centre forward who is as much a front-line defender as an attacker – a sacrificial role carried out in the first two games by Andrew Nabbout.

He likes his team to defend in numbers, stay compact and in their shape, play out quickly and be quick in transition – hence his willingness to make teenage tyro Daniel Arzani a regular second-half substitute.

It's not rocket science, and he doesn't vary it much. He started the same team in both games and used the same substitutes in both matches, too.

What he gives the players is self-belief and certainty and a consistent message and passage of play. They also trust him, and why wouldn't they? This is a man who took a team to the World Cup final in 2010 and also won a European trophy (the UEFA Cup) with his club side Feyenoord: he knows what he is doing and what he is talking about.

Van Marwijk, on the evidence of his stint with Australia, doesn't believe in making things too hard for his players. It is a strength, although critics will say it is a weakness and means that he cannot change things up when improvisaton off the bench is needed.

His retort is simple.

"When you change it all the time, it is very difficult for the players … in Holland, a lot of times coaches say we can play four or five systems and I always say the coaches can, but the players cannot.

"It is very difficult to play in the system with 11 players and 12 substitute players, all to think in the same way, the system must give you the strength to play, and get more and more confidence every day."

It is hard to say what his legacy will be, but one thing is certain: under the Dutchman, Australia have approached this World Cup in a radically different way than they would have under his predecessor, Postecoglou.

There has been no manifesto from Van Marwijk, no statements of national intent, no talk of an Australian style or playing set up expressing a national culture.

There have been no statements about adopting a risk-taking attititude, no talk of the Socceroos imposing themselves on opponents, of trying to go head to head with a team like France.

It is about maximising resources to gain the best results in the short term. Is it pragmatic? Yes. Is it exciting? The fans can be the judges, but it's fair to say that the Socceroos have been very much in both games they have played, and it's hard to disagree with their coach that had they had an ounce of luck they might have, at the very least, two points by now and perhaps even four.

They certainly have never been in danger of shipping three goals a game, as they did under Postecoglou in Brazil, and at this point they have scored only one goal less than his predecessor's team did in their two games (although both from the penalty spot).

Whisper it quietly, but this might actually be the best Australian style for a nation whose footballers are generally strong, powerful, athletic and mentally strong, if not always the most technically gifted. If those strengths are played to, the collective might outweigh any shortcomings.

What he will do in the final game remains to be seen, but perhaps a final word on van Marwijk's impact is best delivered by an opposition coach, Denmark's Age Hareide.

"The World Cup is tough, that's just the way it is. They are very organised and hard to break down. France was lucky to beat them. It's not that easy."