Last year's Sydney to Hobart winner Jim Cooney has questioned organisers' hasty decision to cancel the famous race a week out from the start date, as COVID-19 cases continue to decline across the state.

The race was cancelled on Saturday after the Tasmania government announced no visitors were allowed from the northern beaches, except those returning home or essential workers.

Around 150 Sydney to Hobart sailors live in the area and one-third of the fleet would have been affected by the border ruling. 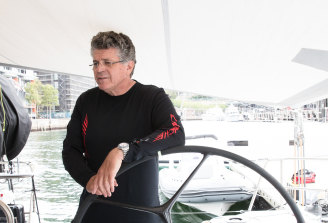 Cooney and his family planned to sail Willow  in this year’s race after selling the famous supermaxi to Russian interests this yearCredit: Janie Barrett

"With the benefit of hindsight, we possibly could have held off for a few more days and watched to see what the case numbers were doing because they seem to be reducing now rather than increasing," he said.

On the day of the race's cancellation, 23 locally acquired cases were recorded before the number of new cases rose to 30 on Sunday.

The number of new cases began to fall on Monday, with just 15 recorded before eight local cases were detected on Tuesday.

"From our perspective, the pain was already gone whether the decision was made last Saturday or Christmas Eve it wouldn't have made any difference to us," Cooney said.

"We would have been happy to keep going and hang on and hope for the best and then if a decision was made Christmas Eve, then it wouldn't have been any more painful for us.

"Nothing happens much in the last few days."

In response to Cooney's comments, the Cruising Yacht Club of Australia reiterated their original reasons to cancel the race and said nothing had changed for the Tasmanian government.

Previously, Sydney to Hobart boss Noel Cornish explained one of the biggest hurdles to the race was the inability for CYCA staff to get down to Hobart and set up for the finish of the race.

Cooney said he believed an alternative solution might have been found if organisers had more time to consider more options.

"Potentially there could have been further discussion in between state governments with idea like if everyone in the race was tested on race morning, by the time we got to Eden the results would all be known," he said.

"And any boat who was 100 per cent negative would be allowed to continue and any boat that had positive tests would have to turn around and go back.

"I'm not critical of the decision…if we had a bit more time there may have been ways to think around it."

The race is now being replaced by a "virtual regatta" with a Sydney to Hobart online event being ran by the CYCA.

Competitors sail the race in an online sailing simulation game, which uses current weather data and their navigational skills on a computer or via mobile.