Melbourne Victory's new Swedish striker Ola Toivonen is not due to link up with his new club until mid-September, but that will still leave him more than a month to bed in with his new teammates ahead of Victory's A-League season opening clash with cross-town rivals Melbourne City.

The World Cup goalscorer – he netted for the Swedes in their narrow loss to Germany in Russia in June – will give coach Kevin Muscat a much needed boost in the goalscoring department, although he will have to work hard to get up to match fitness following his extended post-World Cup break. 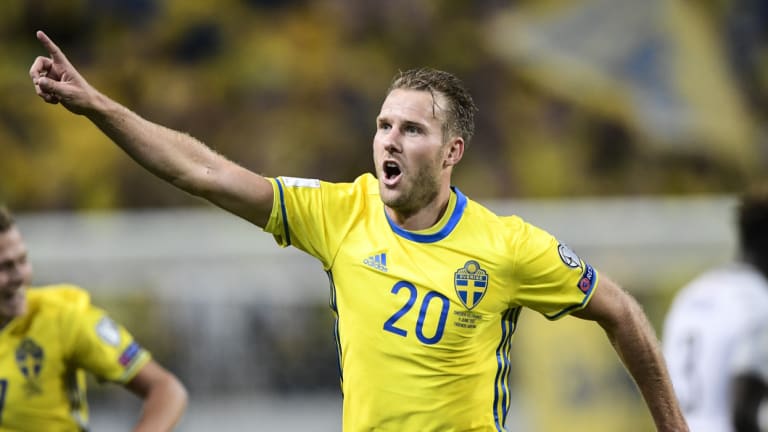 At present only the inexperienced Kenny Athiu (this is only his second A-League campaign) is a recognised frontman on the squad's roster, although Victory does boast a host of attacking options from midfield and wide areas through players like Kosta Barbarouses, James Troisi and Japanese superstar Keisuke Honda.

The latter has been with Victory for several weeks now and is gradually building up his fitness.

Like Toivonen, he played and scored in the World Cup in Russia, scoring Japan's equaliser in a group phase game against Senegal.

Muscat said Victory would be adding to their stocks, and an attacking player is likely to be in their sights.

Honda has yet to make a start for Victory – he sat out the team's ill-tempered pre-season game against Brisbane in Morwell at the weekend – and is not expected to line up when Victory play host to Western Sydney Wanderers in another A-League pre-season fixture next weekend. 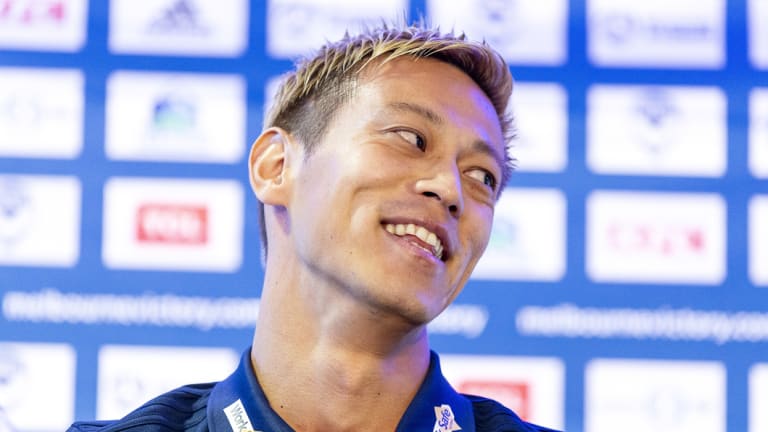 Keisuke Honda is yet to take the field for Victory.

That game will be played in Ballarat, continuing the club's policy of taking preparation matches to regional Victoria.

Victory still have one visa spot left on their roster, and one role for an under 23 player.

Muscat gave a debut on Saturday to new signing Georg Niedermeier, a German centre back who joined the Australian champions after two years at Freiburg.

The 32-year-old has a distinguished track record however, having spent six years (making 86 appearances) for German powerhouse Bayern Munich at the start of his career before spending another seven years with VFB Stuttgart.

The game against Brisbane ended 1-1 with the Roar reduced to 10 players at the end after Tobias Mikkelsen was sent off.

Niedermeier got some minutes and Muscat said he was pleased that he had got his first appearance under his belt. He would have liked to have used him for longer but the wet weather and the soggy surface ensured that the coach did not want to put a crucial defender still short of match fitness under too much pressure.

''It was one of those days, the conditions weren't great and the pitch was pretty heavy because of the rain but it was a worthwhile hit-out for the boys.

''A lot of players weren't available and we tried quite a few different things with our structure.

''We were hoping to get a little bit more out of Georg but with the pitch being so heavy with the rain we erred on the side of caution.''

''We continue adding to the squad. We are getting Nick (Ansell) back, Georg and Keisuke have started full training with the team.

''We will have some more bodies arriving in the next week or so.

"In the last 15 or 20 minutes I thought our level of fitness was good.

''We look forwad to seeing Ola here in the next week. A lot of work has gone on to get to this point. He is another good quality player, but his characteristics as a person are also exactly what we are looking for.''