Melbourne Victory cult hero "King" Kenny Athiu has continued his rise from part-time journeyman to full-time professional by inking a two-year deal with the A-League champions.

Originally signed on-loan from NPL powerhouse Heidelberg United, the 25-year-old took time in adapting to the pace and demands of full-time professionalism, but came good in the latter stages of the season with several impressive cameos off the bench. 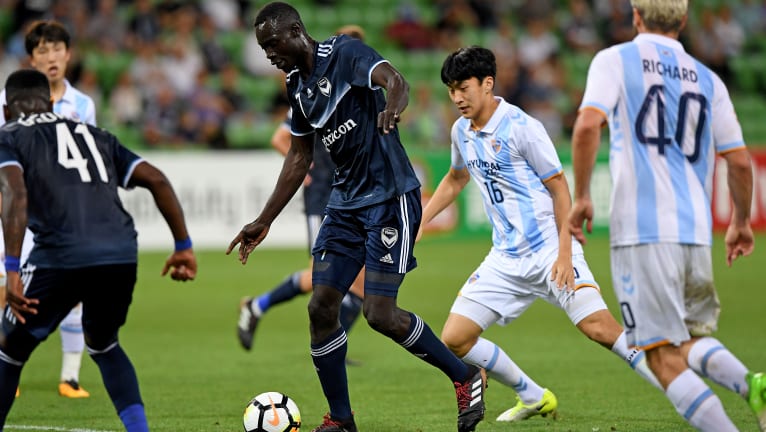 All hail the King: Kenny Athiu has signed on for two more years at Melbourne Victory.

"Kenny absolutely deserves this new contract," Victory coach Kevin Muscat said. "He's worked incredibly hard over the past six months to get himself into a position where he now has the physical capabilities to play at the top level.

"We saw him come into his own late in the season, not only getting himself a couple of goals, but more importantly he made an impact off the bench and influenced games.

"Not many would realise this, but it was actually Kenny's desperation that won the ball for Terry Antonis to score the winner against Sydney FC and get us into the grand final.

"Kenny's a big boy who moves well across the ground, so he's going to cause plenty of headaches and we're looking forward to seeing what he can do with a full pre-season under his belt."

"I really enjoyed my first taste of professional football last season, it was a big step up but I had great support from everyone at the club," he said.

Meanwhile, Melbourne City has announced a new coaching structure for its senior men's and women's teams.

Before that, he coached at Western Sydney Wanderers and Sydney FC. As a player, his career spanned more than 20 seasons in the UK (Leicester City), Italy (AC Milan, Perugia), Greece (Kavala), the Netherlands (Roda) and Australia (Sydney United, Hobart Zebras).