No Honda, no Victory?

The Japanese superstar has been missing now since the Melbourne derby just before Christmas, but Kevin Muscat's team has barely missed a beat. 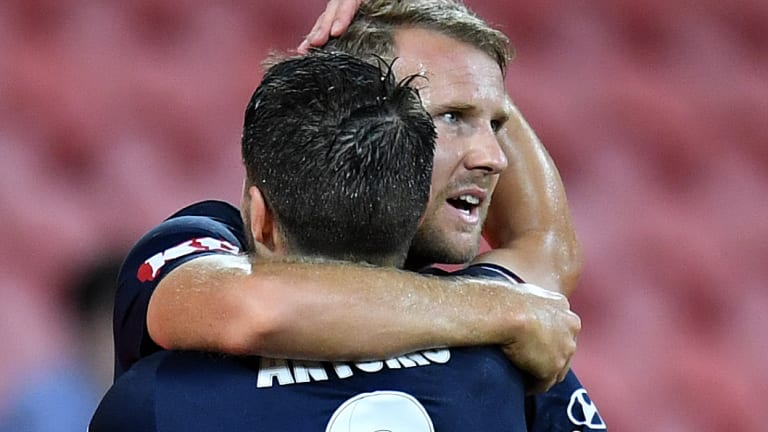 The record 5-0 win over Brisbane (the highest margin they have ever beaten the Queenslanders by) on Tuesday night was a perfect example of the depth of Muscat's squad and the quality of players he can bring in to cover for any who are missing through injury or illness.

That was Victory's fourth game in 11 days, and since Honda went down with a serious hamstring problem Victory have drawn twice and won three times, losing only away from home to Adelaide.

The workload does not ease off, however, as Victory host Wellington on Sunday night and then entertain Sydney in the Australia Day clash on January 26.

Kosta Barbarouses, with a hat-trick at Suncorp Stadium, showed how much he had appreciated being given a rest from the narrow win over Newcastle last weekend, while James Troisi, Terry Antonis and Ola Toivonen were simply too good for their opponents in the final third of the pitch.

Sure, there is no doubt that the navy blues would be better with their marquee man – there are not many imports who have come to the A-League with a better pedigree than Keisuke Honda – but they are managing very well without him, thank you.

Granted, the Roar were poor for much of this game, allowing Victory to do as they wanted for long periods in the match, but it still takes a good side to show the ruthlessness needed to score five goals away from home.

Many were anointing Honda as the greatest import ever to appear in the competition after he had played just a couple of games – that was rather overblown, and his injury record means that he cannot (at least on this season's efforts) be regarded in such light as he has missed too many matches.

But if he continues in the same vein there will be some prepared to argue the case for Victory's other top level foreigner, Swedish World Cup striker Toivonen, whose 15th minute header opened the scoring to put them on the way to their 5-0 triumph

is a man of few words but he does his talking on the pitch.

There have been few forwards to have played in this competition who share his ability to drift into the gaps, escape their markers and find the little pockets of space that give them the time to control the ball and place it beyond the goalkeeper.

His opening header was a perfect example of his talent. There was some excellent approach work by Antonis, whose deft cross found Toivonen all on his own wide of the far post. It was an acute angle, and many strikers would have lacked the technique to do anything much more than head the ball in the direction of the keeper.

Toivonen, however, is at a higher level, and he steered the ball superbly across goal to evade Jamie Young and nestle inside the far post.

Barbarouses, the former Roar player, is, of course, an import himself, but the New Zealander has been around in the domestic competition so long he feels like a local.

He too is one of the sharpest strikers in the competition and has proved his worth down the years. On Tuesday he demonstrated how good he is once more, netting three times including once from a penalty.

The top six on the A-League ladder may look to be sorted out already, but at least the FFA can console themselves with the knowledge that the battle for top spot will go down to the wire.

Perth are on top with 32 points with Victory three points behind on 29 although they have played a match more. Sydney FC – with 26 points and a game in hand – and Melbourne City are all close behind.

If all four can keep their form going then the lack of competition for a top six spot will likely be forgotten in the drama of the fight for top spot.