After learning from his mistakes, Melbourne co-captain Jack Viney believes his well-documented foot troubles are now behind him as he prepares for the most important game of his career on Friday night.

An excited Viney will be picked by the Demons to play in their blockbuster elimination final against Geelong at the MCG – his first game in over two months. 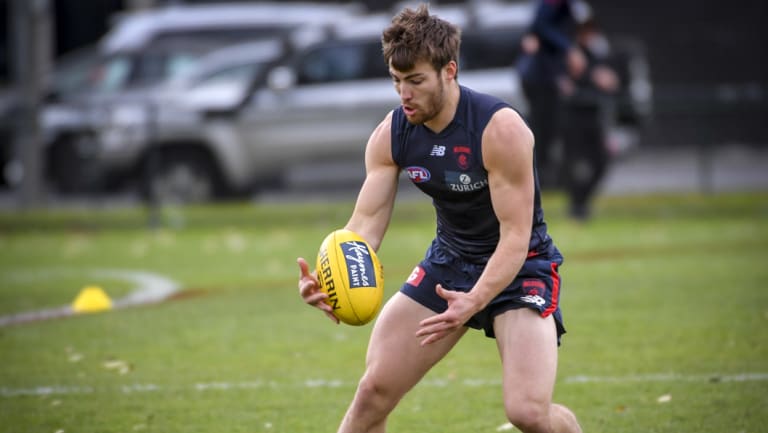 Jack Viney is confident his foot issues are over with.

The 24-year-old’s last 12 months have been dogged by foot issues with a stress fracture, and an expedited rehab program which backfired, not only marring the back end of his 2017 campaign but also forcing him to miss the opening two months of this season.

A stress-related toe injury has sidelined him since round 16, but Viney, who has only played seven games this year, doesn’t envisage he’ll encounter any match-fitness issues against the Cats and reckons he’ll hit the ground running.

Viney has declared his foot “100 per cent” and is confident he won’t experience any more issues with it in the future.

“I’m not stressing about it too hard, I think come post-season we’ll do a bit of a look into it and really dig deep and see if there’s anything we can come up with but for the short-term, I’m pretty confident with it and really happy with how it’s feeling and tracking.

“I’ll be trying to find the tempo of the game pretty early I reckon but once I’ve found it I think I’ll fit in pretty nicely.”

Viney admitted it was frustrating watching on from the sidelines as his teammates went on their emotional rollercoaster journey to the finals, but he was happy to employ a more conservative rehab program this time around.

“I want to play football, I wanted to be out there, you could see the team building,” he said.

“But at the same time it is what it is and I was in a pretty similar position last year where I probably did the opposite and pushed it and didn’t come off good for it so you learn from your mistakes and that made me pretty content just sitting and watching and trying to get my body right for hopefully finals to roll around which it has, which I’m really thankful and grateful for and my body’s feeling good.”

Viney, who admitted he would have been a “touch-and-go” prospect without the pre-finals bye, doesn’t feel any pressure to provide the X-factor for the Demons this week.

Having suffered two heartbreaking last-gasp losses to the Cats this year, the 2016 best-and-fairest winner believes it will be a case of third time lucky for Melbourne on Friday night.

“Some really clear learnings came out of both losses to Geelong which really helped us in a similar position,” Viney said.

“We feel like if we were put in similar positions like we were the last couple of times that we’d be able to handle ourselves much better.”

The Cats look set to head into the game with roughly four times Melbourne’s finals experience. In fact, only four Demons – Jordan Lewis, Michael Hibberd, Nathan Jones and Jake Melksham – have played in finals. But Viney doesn’t think that will be much of a factor.

“At the end of the day, it’s another game of football,” he said. “I think we’ve been trained up really well over the last two-three years to be able to adapt to these kinds of games.”

Viney said he and his fellow midfielders were relishing the chance to go head-to-head with one of the most star-studded on-ball brigades in the AFL on one of the season’s biggest stages.

“Guys like [Patrick] Dangerfield, [Joel] Selwood, [Gary] Ablett to name a few, you grow up idolising these players. To come up against them is a pretty special occasion and our boys love the challenge absolutely,” he said.

Viney said it was exciting for Melbourne to be back in the finals after 12 years because of all the dark times the club had experienced in that time.

“We did come through some pretty dark times and to be in my sixth season now and finally get to play my first final, along with a lot of other people here, it’s a really exciting opportunity,” he said.

“The buzz and thrill of finals is something we’re not experienced with and to see what it’s all about is really exciting, I suppose especially coming from where we have.”

Meanwhile, Viney believes Dom Tyson is a good chance of taking his place in the team just 12 days after breaking his arm.