MINNEAPOLIS — Braxton Key was in Pittsburgh readying for Alabama’s second-round game against Villanova on the evening of last March 16, when he got an “upset alert” on his phone. Virginia was trailing University of Maryland Baltimore County.

“I was like, There’s no way. They’re playing a 16 seed,” Key recalled Monday night. “I turned the game on, and, sure enough, they did.”

Virginia — for the seven of you who still don’t know — lost, 74-54, in the first round of last year’s N.C.A.A. tournament, becoming the first top seed to lose to a bottom seed in 33 years of the full-size men’s bracket.

Key texted his condolences to Virginia’s Kyle Guy, a friend from summer basketball in years past, immediately after. “He didn’t text me back for a couple days,” Key said. “I could understand.”

Alabama lost to Villanova the following day, and Villanova won the national championship. Key, a cousin of the former Virginia great Ralph Sampson, transferred to Virginia and got an N.C.A.A. waiver letting him play this season.

And on Monday night, with essential contributions from Key, Virginia won its first national championship, defeating Texas Tech in overtime, 85-77, just one year after that devastating, infamous defeat.

“I just thought with our work ethic, our drive, and whatever was fueling us from last year, about losing to U.M.B.C., I just thought we had a good chance to win it all,” Key said on the court amid the confetti.

Virginia’s trajectory from last year to this year has to count among the most dramatic in sports. Its players and coach, Tony Bennett, had to have known that anything short of a national championship this season would have been at once credited to last year’s devastating defeat.

This was particularly true after they got a No. 1 seed, the program’s fourth in six seasons. In all six games of this tournament, they were the team with the better seed. There was no game they were not supposed to win, even as observers doubted them every game. It was like walking across a tightrope made of eggshells stretched over very thin ice.

“Not after last year,” said associate head coach Jason Williford. “No one could have thought that we’d do this.”

Indeed. Virginia did not make it easy on its frayed nerves with a series of closer-than-close contests this tournament. It trailed this year’s No. 16 seed, Gardner-Webb, at halftime. It defeated Oregon, a No. 12 seed, by just 4 points. Its regional final against Purdue was salvaged thanks only to freshman Kihei Clark’s pass across half the court to Mamadi Diakite, who forced overtime with a quick shot. Saturday’s national-semifinal victory over Auburn came courtesy of Guy’s being fouled on a 3-pointer with a second left and hitting all three free throws to put his team up 1.

That left Monday night’s final, in which Texas Tech outscored Virginia by 10 in the last 10 minutes, and the Cavaliers were kept alive only by De’Andre Hunter’s clutch 3-pointer with 14 seconds left. 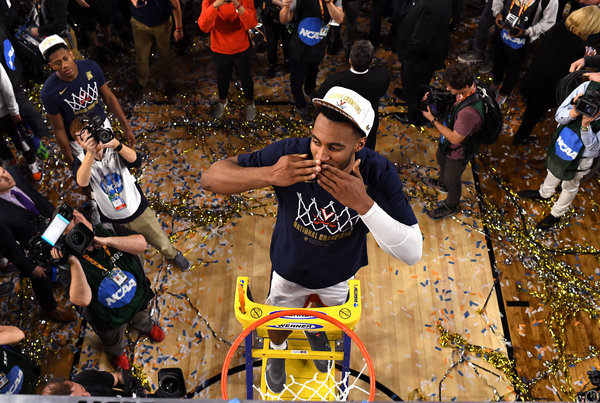 Effectively Virginia’s sixth man, Key was an important but not focal player this season.

But Monday night, Key played 28 minutes — far higher than his season average of 19.8 minutes, even accounting for the five-minute overtime period.

He quietly led his team in rebounds, with 10. He half-blocked Texas Tech star Jarrett Culver’s layup midway through the second half, and then fully blocked Culver’s shot at the end of regulation, preventing what could have been a buzzer-beater to doom the Cavaliers. He no-look assisted on a Guy score late in the second half, and assisted on a Hunter 3-pointer in overtime.

Key’s plus-minus — the statistic that states the score of the game during the minutes a player played — was +18, by far the highest.

Key’s role was, if not precisely part of the master plan, then at least a foreseeable eventuality, according to a Virginia coach. In many ways, it all came back to U.M.B.C.

Last off-season, Virginia’s coaches saw in Key not only a talented, high-character player with ties to the program. They saw a 6-foot-8 jigsaw puzzle piece that fit perfectly into the team that was taking shape following the departures of seniors Isaiah Wilkins and Devon Hall.

In fact, Soderberg said, there was one game in particular from Virginia’s previous season that pointed to its shortcoming when it came to going small: the game in which five players, none taller than 6-5, shot 12 from 24 from deep to beat Virginia by 20 in college basketball’s most historic loss.

“U.M.B.C.,” Soderberg said. “They played five guys smaller than us and hammered us.”

On Monday, because Texas Tech’s starting center Tariq Owens was not playing at 100 percent because of a sprained ankle, the Red Raiders elected to go small, playing lineups with less size — but more speed and mobility — than its country-best defense typically deployed. (It is part of why the game was not the low-scoring, unexciting slugfest that some had feared.)

Texas Tech’s tactical choice prompted Virginia to go small as well, according to Soderberg. And that meant many minutes for Key.

Virginia’s 2018 humiliation and its 2019 triumph seem destined to live on in tandem, a yin and a yang contextualizing and balancing the other.

Perhaps the wedge that separates the two events is players like Hunter, who was the Atlantic Coast Conference sixth man of the year last season and led all players Monday night with a career-high 27 points, yet who did not play in the U.M.B.C. game because of a wrist injury. Or Clark, a freshman this year. Or Key, who arrived last summer with substantial experience yet a clean slate on a team still reeling from the previous March.

“I wish it wouldn’t have happened in some ways,” Bennett said of the U.M.B.C. loss. “Now I say, well, it bought us a ticket here. So be it.”

Key had a less ambivalent take. Referring to the documentary series about extraordinary sports happenings, he said, “We should definitely have a ‘30 for 30.’”