Strathclyde Sirens blew the chase for the Vitality Netball Superleague top four wide open with victory over Wasps on Sunday, while Team Bath secured their place in the semi-finals after beating Surrey Storm.

Ahead of the final bye week of the season, the race for the top-four places was the focus and, after Leeds Rhinos won in the opening game of the afternoon, the pressure was on Wasps and Saracens Mavericks in the latter games.

Wasps were the first to fold, as they were beaten by an inspired Sirens team who ignited their own top-four hopes, before Manchester Thunder hammered Mavs to leave fourth and seventh separated by just six points.

League-leaders Team Bath became the first team to secure a semi-final place – but their target will be on the grander prizes on offer on finals weekend in June – with who joins them very much up for grabs.

Round 16 concludes on Monday when Wasps need to bounce back against a Thunder team who can close in on their own top-four place alongside Loughborough who face London Pulse – wins for Thunder and Pulse will see them join Bath, but fourth place looks set to go to the wire,

Strathclyde Sirens have made enormous strides this season and they secured an eighth win of the campaign when they beat Wasps in a result that could have huge ramifications in the battle for a top-four position.

With the pressure on after Rhinos’ victory over Stars, Wasps knew they needed victory against a Sirens team who had drawn with them in Round Seven to maintain their cushion over the chasing pack.

However, in a contest as evenly matched as their 32-32 draw in March, it was the third quarter which proved decisive as Sirens turned a two-goal deficit into a six-goal advantage that earned them a huge victory.

With little between the teams over the first two quarters, it was defences on top as Josie Huckle and Fran Williams hustled Sirens’ talented teenage shooter Emma Barrie, and at the other end Towera Vinkhumbo and Emily Nicholl kept Wasps at bay.

Alllll the emotions, that felt good, wow this team are special♥️@SirensNetball pic.twitter.com/Qzgfn1xsrT

A game which ebbed and flowed saw Wasps 22-19 in front at half-time, but that inspired Sirens, who had Gia Abernethy, Sophia Cullen and Beth Dix dominating the mid-court and Barry remaining ice-cool under the posts.

A spectacular 11-3 run midway through the third ensured Sirens were in control, and Wasps’ woes were doubled when Iona Christian suffered a nasty looking ankle injury that forced a reshuffle.

The two-time champions regrouped but could not get any closer than four goals as Sirens remained rock-solid to close out a win that leaves Wasps just four points clear of the chasing pack, who are closing in and have games in hand.

Leeds Rhinos bounced back from their defeat to Team Bath last time out with a dominant 27-goal victory over Severn Stars in the opening match of the day. After three successive victories, which included a potentially priceless win against Wasps, Dan Ryan was disappointed to see his team beaten convincingly by Bath and after demanding a reaction that is exactly what he got.

Leeds started fast and never looked back, opening the match with seven unanswered goals before Georgia Rowe finally got the Stars on the board.

However, there was no let-up from a relentless Rhinos who had Donnell Wallam firing with a perfect first quarter shooting record as they ended the opening 15 minutes with a 10-goal advantage.

ALWAYS ABOUT THE RESPONSE!

An important bounce back for @RhinosNetballSL with a 27 goal win over Stars.

Stars turned the ball over from their opening centre pass but gradually began to chip away at the Rhinos’ advantage with Kyra Jones beginning to have an influence, but Rhinos regrouped to finish the half stronger.

With a 16-cushion in their favour, Rhinos opted to keep their strongest line-up on court – perhaps conscious that goal difference might play a part later in the season. Both Brie Grierson and Rhea Dixon underlined the rapid strides they have made this season, playing their part as Rhinos pulled away in the latter part of a third quarter which had seen Stars at their most competitive.

Ryan used the final quarter to ring the changes, but the pattern continued for Leeds, who turned their 18-goal third quarter lead into a 63-36 victory – their second biggest of the season.

Team Bath’s quest for a first title since 2013 will not be defined by the latter stages of the season, but they ensured there was no slip-up with a 55-39 win over a competitive Surrey Storm.

Five-time champions Bath have been the dominant force this season, losing just once against Mavericks at the start of April, while Storm have fallen short of their own targets with just two wins.

However, there was nothing between them in a keenly-contested opening 12 minutes, that only broke the way of Bath in the final moments as their All-Star defence turned over crucial ball to help them open up a 16-11 lead at the end of the first quarter. 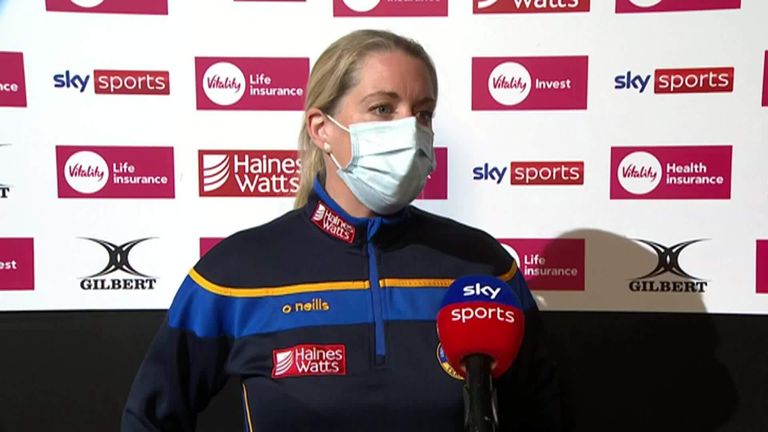 That pattern was largely repeated throughout the contest as Storm kept Bath competitive, but the league leaders were able to squeeze their foot on the accelerator when they needed to, thanks in the main to the shooting circle of Kim Borger and Sophie Drakeford-Lewis.

Bath edged both the second and third quarters 13-10 to open up an 11-goal lead going into the final stages and, with both teams ringing the changes, a comfortable Bath win was secured with positives to take for Storm.

Thunder too good for faltering Mavericks

Defending champions Manchester Thunder moved to within one win of securing a return to the Superleague semi-finals after running away with a 60-42 victory over Saracens Mavericks who have dropped to seventh.

Mavericks came into the match having lost three of their last four games, and with injuries limiting their defensive options they were never in the contest against a Thunder side who started fast.

It did not take long for the champions to open up an early advantage, pulling away from Mavericks in the second half of the first quarter with Joyce Mvula and Eleanor Cardwell close to perfect under the post to open up an eight-goal lead.

Mavericks were shorn of Jo Trip and Sam May in their defensive end, but it was in attack that their troubles emerged as they failed to make their most of their early turnovers which threatened to make a dent in Thunder’s lead.

While Mavs were wasting their chances, Thunder were ruthless as Caroline O’Hanlon from wing attack kept ball into the circle for Mvula and Cardwell who helped Karen Greig’s team into a double-figure lead.

Onwards Thunder pushed, knowing victory would take them within one win of securing a return to the top four and after weathering another bright Mavericks start to the quarter they pulled away in a dominant third to lead 48-31 and allow Greig the chance to rest her squad.

Berri Neal and Lois Pearson came on as the starting seven were rested in the final quarter ahead of Monday night’s clash with Wasps.

Sky Sports is your home of netball. The Vitality Netball Superleague continues on Monday with Round 16 and two matches live on Sky Sports Arena and Mix. Both contests will also be streamed on the Sky Sports YouTube channel from 5pm.