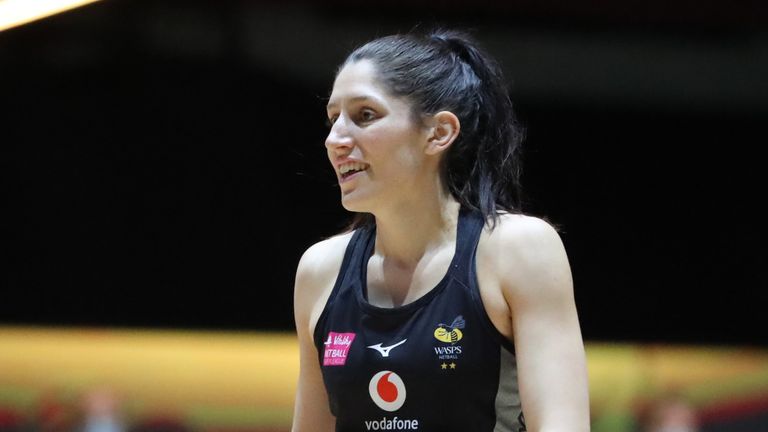 After back-to-back defeats, and with fifth-placed Saracens Mavericks just three points behind them in the table, Wasps’ head coach Mel Mansfield said that a Round 15-victory was “essential” and when it came down to it, her team delivered.

Meanwhile in the earlier match, Loughborough Lightning highlighted their versatility and strength, as they dismissed Surrey Storm and outscored them by 25 goals.

The two matches concluded a busy round of Vitality Netball Superleague action and if you missed any of the games, you can watch them back in full on the Sky Sports YouTube channel.

Wasps stand up in face of Pulse pressure

Wasps ensured that they remain in the driving seat when it comes to securing the fourth play-off position at the end of the regular season after a gutsy five-goal victory over London Pulse.

They’ll now turn their attentions to another double-header weekend with fixtures against Strathclyde Sirens and Manchester Thunder in Round 16 on Sunday and Monday.

For London Pulse, the encounter again highlighted their growth and the exceptional young talents they have within their ranks. Once again, Funmi Fadoju and Olivia Tchine excelled, while Lefebre Rademan is looking more comfortable by the second in a Pulse dress.

In the first quarter, Wasps looked focused as Amy Flanagan and Josie Huckle both turned over a wealth of ball, and the former also delivered in attack.

With their route into Rachel Dunn working well, Wasps created a seven-goal lead before Pulse responded in the second quarter.

The shift of Fadoju to GD from WD proved to be a masterstroke, as she hassled Katie Harris and Zara Everitt kept Iona Christian quiet.

Up the other end, as Tchine settled at goal shooter, the home team roared back into the contest with a 12-9 quarter in their favour.

Wasps used the first few minutes of the second half to restore a slight hold on proceedings with key rebounds from Fran Williams being taken through to goal.

However, Pulse had another response up their sleeve and as the third quarter wore on, they made life incredibly difficult for Wasps in their attacking goal third.

Further turnovers from Fadoju allowed Pulse to pull it back to within three, before Dunn stepped up in the latter stages and ill-discipline cost the London side.

With a 34-26 lead going into the final 12 minutes, Wasps knew that they just needed to focus on converting their own centre passes to goal, while Pulse knew they could still rattle their opponents.

In the end, a composed first centre pass from Wasps set them on the right track and although Pulse pressed and pressed, the clock proved to be Wasps’ friend and they were able to hold firm.

Lightning fly out of blocks to dismiss Storm

Loughborough Lightning put to bed memories of an “ugly” performance on Sunday, as they dismissed Surrey Storm 53-28 on Monday night.

A 16-7 first quarter was created off the back of tenacious work from Beth Cobden and Sam May in defence, and an instant connection being made in attack between Hannah Williams, Suzie Liverseidge and Mary Cholhok.

The first pause did little to quell Lightning’s momentum, and when their lead stretched out to 17 goals, Storm decided to change their line-up in a bid to hit back.

Niamh Cooper shifted to Centre, Nicole Humphreys arrived at WD, and Ellie Kelk at shooter. However, the goals continued to rack up against them and Storm went into the half-time break with a lot to think about.

Further changes arrived for Storm in the third quarter, including the introduction of Felisitus Kwanga into their defensive-end, and they started the second half with renewed vigour.

Alima Priest, who was unrelenting in her pursuit of turnover ball against Cholhok, led by example at goal keeper and the presence of Kwanga in front of her added a new dimension, which resulted in a tighter quarter.

Lightning settled towards the end of the third though, and continued to show their versatility as the game progressed.

Cobden’s move to Centre allowed captain Nat Panagarry to hustle at WD, while Ella Clark’s time at shooter highlighted yet another option that Francis-Bayman can turn to during the latter stages of the season.

Sky Sports is your home of netball. The Vitality Netball Superleague continues on Sunday with Round 16 and four back-to-back matches steamed live on the Sky Sports YouTube channel from 12pm.