The Melbourne Vixens were brave and a little bold but fell short of claiming a last-minute Super Netball finals berth, losing to the Sunshine Coast Lightning on Sunday.

The Vixens entered the game needing to beat fourth-placed Lightning by five goals and win at least three quarters. 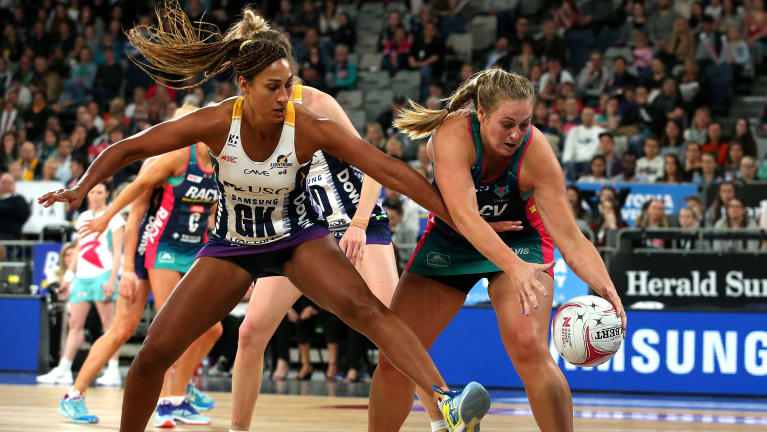 And the Victorian side had to do this without star shooter Mwai Kumwenda, who ruptured her anterior cruciate ligament last round against West Coast Fever.

But against the reigning champions Lightning, this was mission impossible and so it proved to be as the Lightning won 56-51 at Hisense Arena in front of 7143 supporters.

The Lightning finished fourth and will play a knockout semi-final against Queensland Firebirds in Brisbane next Sunday while GWS Giants will host West Coast Fever in Sydney on Saturday in the major semi-final.

Vixens coach Simone McKinnis said her side needed that effort in recent losses to the Fever in Perth and the Giants in Melbourne.

The Vixens played the four finals sides in their last five games and only beat the Firebirds.

"Generally there was some great spirit for the game today but we have to look at the season as a whole and opportunities we didn't take or where we didn't have that spirit," McKinnis said.

"Whether it was last week against Fever or the previous week against the Giants, if we showed that spirit and fight we would be in a different position and that is what we have to look at across the year.

"We have just got to be better."

The Vixens swung a surprise selection, moving Kim Commane (31 of 33 goals) into the goal-shooter role after she hadn’t played all season. Commane filled in for Tegan Philip in 2016 so had more game experience than rookies Sam Gooden or Rahni Samasan.

"We only had the week to rejig but Kim has played with us before and she did a really great job for us," McKinnis said.

"Defensively I think we pressured them and provided opportunities at the attack end but we needed more, more opportunities to score."

Lightning captain Geva Mentor said her team had to "win ugly" but would look forward to an all-Queensland semi-final.

“A lot of people wrote us off going 0-3 down to start the season but we believed in ourselves and were working each time we stepped out on court,” Mentor said.

“For us to be against the Firebirds in Queensland, that derby has been so vicious all season that it will be exciting for the crowd, our fans and netball in general.

“We will have to bring our best on the day.”

Commane and Philip were perfect in the opening term, shooting 15 from 15 combined as the Vixens won the term 15-14 and dared to dream.

But the Lightning made their stand in the second term, dominating centre court and the defensive circle. They won the term 16-9 and taking 30-24 half-time lead.

The Vixens then needed to win the second half by 11 goals and claim both quarters, and pulling off mission impossible became even more unlikely.

The Lightning looked likely to run away with the game with a 6-2 start to the third term but the Vixens showed the fight they are renowned for, battling back to draw the quarter at 7-7 with seven minutes left.

But the Lightning regained their composure to claim a 15-12 quarter win and ended the Vixens' hopes.

Still the home side didn’t drop their heads and turned on their best form in the final term coming from 45-36 down to get within four goals with under four minutes to play before towering shooter Caitlin Bassett's shooting ended the contest.

A Vixens win would have seen them finish the season with more wins yet miss the finals on bonus points, instead the Lightning showed they deserved their place equalling the Vixens on eight wins plus having a draw.

"Everyone bangs on about the bonus points but if we had have won games earlier on that we should have been winning then bonus points would be irrelevant," McKinnis said.

The Lightning will have to do it the long way but on this display the reigning champions will have every chance of going back-to-back.