Brendon Goddard has admitted to feeling vulnerable all year as speculation around his future continues to swirl, but the Essendon veteran said the “percentages are in my favour” with regards to earning a new contract.

Goddard has been in reasonable form this season and is ranked first at the Bombers for uncontested possessions, third for disposals, third for marks and fifth for rebound-50s. 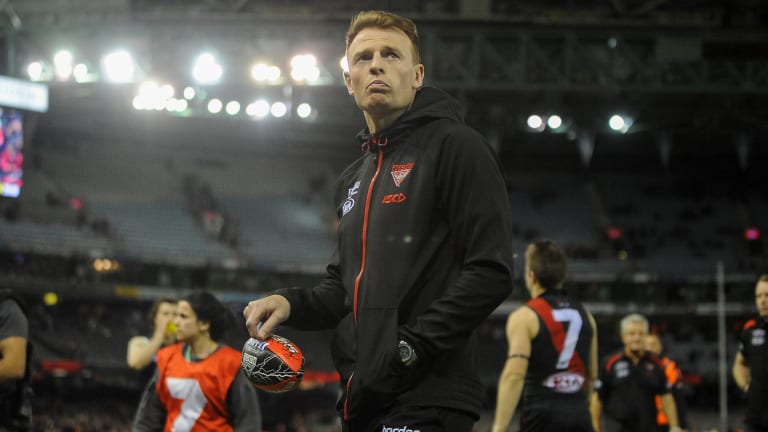 Brendon Goddard is feeling ‘vulnerable’, but comfortable with contract negotiations with Essendon.

The 33-year-old was confident he could play on next season, and said the club thought so too, but he revealed that “a number of things” were still preventing the Bombers from committing to him with just two games left in the home-and-away season.

Despite the hold-up, Goddard has praised the club for its “total transparency” during contract negotiations.

“I’ve felt vulnerable all year to be honest,” Goddard told RSN on Thursday.

“I think I discussed a couple of weeks ago about preparing myself for this situation, and have done all year since late in the pre-season, so early Jan-Feb, and just getting my head around this may be my last year and what do I need to do to prepare for the worst case scenario.

“There’s total transparency between the parties that need to know … I don’t have a choice, I’m happy with that, it is what it is.

“But we’re all on the same page. So whether I agree with it or not, I’ve got my head around that it’s the reality of the situation and the position I’m in.”

Goddard said he didn’t need to know the club’s intentions before the end of the regular season and was happy to wait until after the season ended.

“It doesn’t bother me. I’m not one for farewells and congratulations and stuff like that,” he said.

“It’s not going to define my career or my legacy whether I get a farewell game or whether I know before my last game, or whatever, it’s not that important to me with respect.”

Since joining the Bombers from St Kilda as a free agent at the end of 2012, Goddard has played 127 games for a career total of 332 – ranking him equal 23rd all-time.

Goddard will overtake Leigh Matthews, Drew Petrie, Corey Enright and Justin Madden on Friday night if he plays game No.333 against Richmond.