When Yao Ming met Han Xu at the 2018 Asian Games, he learned that they shared an affinity for the Maroon 5 song “Sugar.”

Han, a 6-foot-9 rookie center for the Liberty, can relate to Yao — the 7-6 groundbreaker for Chinese players in the N.B.A. — over more than Adam Levine’s crooning. Although Yao, who retired in 2011, did not broach the topic during their conversation, the demands for Han to follow in his footsteps are evident.

Han, 19, is already being described as a Yao-like figure for women’s basketball in China.

During her first game for the Liberty, an 89-71 exhibition win over the Chinese national team at Barclays Center on Thursday, the arena scoreboard repeatedly played ads for Han T-shirts for sale on the concourse. Several large Chinese flags were displayed in the stands.

When Han left the game with 1 minute 29 seconds to play in the fourth quarter, tied with Kia Nurse for a game-high 19 points, Joe Tsai, the Taiwanese-Canadian owner of the Liberty, stood and gave her a high-five.

“Physically and mentally, she’s so talented, she can be the best player in the world,” said Li Meng, a forward on the Chinese team.

Cultivating a recognizable star from basketball’s largest market outside the United States could open up new business opportunities for the W.N.B.A. as it continually seeks more exposure. (Alipay, an online payment platform based in China, was a notable sponsor at Thursday’s game.) 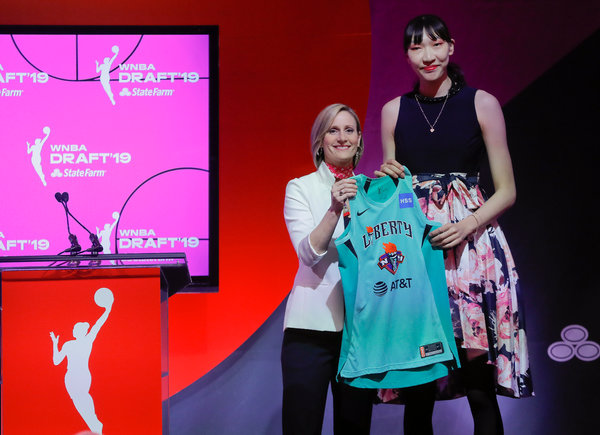 “I feel some pressure,” Han said. “I represent the whole of China.”

The situation did not visibly weigh on Han during a trip to New York for the W.N.B.A. draft last month, when she was selected in the second round.

Han walked the streets of Midtown Manhattan in white Vans, a black accordion skirt, a white turtleneck and a stylish jean jacket. In a day full of touristy visits arranged by the league, Han seemed most invested in an impromptu sojourn into H&M.

She resembled any other teenager, shopping for casual wear and whispering into nooks of Grand Central Terminal. But some people did not treat her that way.

A crew of male construction workers lewdly remarked about her size and her gender. Another man stopped in the middle of a crosswalk on Seventh Avenue and joked flatly, “You must be good at basketball.”

Han seemed unaffected by the attention, a demeanor that would bode well for her professional life given the hopes for her in her homeland. Han, who knows some English but is not fluent, kept walking and looking down at her phone even as everyone in the vicinity seemingly looked up at her.

Han was noticeably shy at times but also displayed a quick wit. When asked what her favorite part about the United States was compared with China, Han quipped that it was the air quality.

Before the draft, she was considered one of the most intriguing prospects. Scouts were drawn to her size (she and Brittney Griner are tied atop the league’s chart) and her potential; because many of the W.N.B.A.’s top stars play in China during the off-season, Han has regularly faced elite competition.

“She has a high I.Q., incredibly skilled, wants to be one of the best players in the world,” said Matt Blue, who coached Han at an academy operated by the N.B.A. in Shandong Province. “I can’t think of a better person to usher in the new wave of Chinese players.”

Han is from Shijiazhuang, about 300 kilometers (186 miles) southwest of Beijing. Before her, four players from China reached the W.N.B.A — Zheng Haixia, Sui Feifei, Miao Lijie and Chen Nan. Zheng, whom The New York Times compared to Shaquille O’Neal in 1997, lasted the longest, playing 34 games over two seasons.

Almost a decade had passed since the league had a player from China — Chen, who suited up for the Chicago Sky in 2009. Another Chinese national team member, Li Yueru, was drafted in the third round this year by the Atlanta Dream.

Two years ago, N.B.A. Commissioner Adam Silver voiced his frustration over the lack of Chinese players competing professionally in North America. In 2016, the N.B.A. opened three academies in China; Han is the first prospect from seven worldwide academies, male or female, to be drafted into the W.N.B.A. or the N.B.A.

“It’s no accident China was the first place we went,” said Chris Ebersole, the N.B.A.’s director of international basketball operations and elite basketball. “It’s a priority market for us as a league. She’s going to be big.”

It may also seem like no accident that Han was drafted by the Liberty, who in January were bought by Tsai, one of the founders of the Chinese e-commerce giant Alibaba Group. But Tsai, who is also among the owner of the Nets, said Wednesday: “I didn’t make any of this happen. I’m just sort of plopped into the middle of this.”

Han was, in fact, on the Liberty’s radar for quite some time. Although Blue and Han acknowledged the need for her to get stronger and quicker in lateral movements, Han’s talent and range have impressed Tina Charles, the Liberty’s star center, who played for a club in Beijing.

They met last September at the FIBA Women’s Basketball World Cup. In a game against the United States, the eventual gold medal winner, Han led China with 20 points and flustered Charles and Morgan Tuck on both ends of the floor. Although China lost, 100-88, the game was the closest between the two nations in 35 years.

After Charles’s team eliminated Han’s in the Chinese league playoffs in February, Charles told Han’s agent that she would like for the two to train together some day. Now they will be teammates on the Liberty, who were 7-27 last year in the midst of an unsteady ownership situation.

During her sightseeing tour, Han entered the NBA Store and looked blasé while checking out Magic Johnson autographed jerseys or tchotchkes featuring James Harden’s beard. But she brightened upon spotting a mural of Charles hidden near a back wall; Han ran up and grazed her hand over Charles’s frame, exclaiming, “Whoa, Tina!”

If success follows Han to the United States, she could influence more Chinese players to test the professional waters stateside — an effect many expected Yao to create as an eight-time All-Star for the Houston Rockets and the first overall pick of the 2002 N.B.A. draft.

Before the draft, ahead of her official entrance into the W.N.B.A. with its great expectations, Han visited the Empire State Building.

After ducking through metal detectors and boarding an express elevator, Han emerged on the 86th floor observation deck. Walking to the skyscraper’s western edge, she looked out over Manhattan toward the Hudson River.

“The world is big,” Han quietly said to herself. “It’s beautiful.” The $30 Quarter-Zip Amazon Shoppers Refuse to Take Off Lovehoney announces huge clearance sale with up to 70% off but you'll need to be quick
We and our partners use cookies on this site to improve our service, perform analytics, personalize advertising, measure advertising performance, and remember website preferences.Ok