Wait goes on for Australian surfers at Pipeline

Australian surfer Julian Wilson's wait to provisionally qualify for next year's Olympics has been extended for at least another day.

Wilson is one of three Aussies in the round of 16 at the season ending Pipe Masters in Hawaii, along with Jack Freestone and Soli Bailey, but the event has been put on hold again due to a small swell in Oahu. 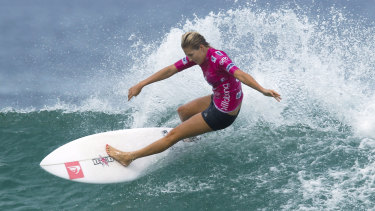 Julian Wilson needs a win over Yago Dora in the last 16 to qualify for the Olympics.Credit:AP

The next call on when action will recommence at Pipeline will be on Monday (Tuesday 4.30am AEDT).

Wilson will confirm his place for Australia at the Tokyo 2020 Olympics if he beats Brazilian Yago Dora in the last 16.

Aussie Owen Wright, who was defeated by Dora in the last 32, has already booked his Games place.

Wilson is 11th in the rankings and progression to the quarter-finals would make it impossible for Freestone to overtake him.

Freestone faces Kiwi Ricardo Christie in the last 16 and needs to win the event at Pipeline and hope for Wilson to lose to Dora if he is to grab one of Australia's spots in Tokyo.